The numbers we are interested in (for the quarter):
Segmental Revenues for Activision Blizzard Inc.

Activision Blizzard's management commentary on the results and earnings guidance

Santa Monica, CA – August 8, 2019 – Activision Blizzard, Inc. (Nasdaq: ATVI) today announced second-quarter 2019 results. “Our second quarter results exceeded our prior outlook for both revenue and earnings per share,” said Bobby Kotick, Chief Executive Officer of Activision Blizzard. “In the first half of 2019 we have prioritized investments in our key franchises and, beginning in the second half of this year our audiences will have a chance to see and experience the initial results of these efforts.”

​Operating Metrics
For the quarter ended June 30, 2019, Activision Blizzard’s net bookingsB were $1.21 billion, compared with $1.38 billion for the second quarter of 2018. Net bookingsB from digital channels were $1.01 billion, as compared with $1.20 billion for the second quarter of 2018. Selected Business Highlights Activision Blizzard outperformed our second quarter outlook, reflecting strong creative and commercial execution as we continued to reposition the business for future growth. Across Call of Duty®, Candy Crush™, Warcraft®, Hearthstone®, Overwatch®, and Diablo®, we are expanding our development teams so that we can accelerate the delivery of content in our pipeline, pursue new business models, broaden our communities, and delight our players. 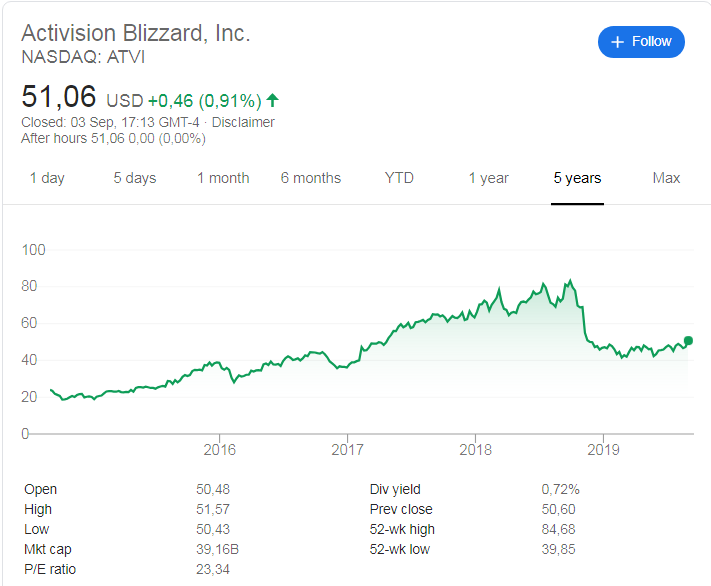 Based on Activision Blizzard's latest earnings report our valuation models provides a target price for Activision Blizzard of $45.60 . This includes factoring in the group''s earnings guidance for the full fiscal year as well as assuming steady growth in their number of active users in the the next few years. We therefore believe that from a fundamental investing perspective that NASDAQ: ATVI does not offer value at its current price and we expect the stock to pull back to levels closer to our target (full value) price.