Alphabet Inc. is an American multinational conglomerate headquartered in Mountain View, California. It was created through a corporate restructuring of Google on October 2, 2015, and became the parent company of Google and several former Google subsidiaries. Wikipedia 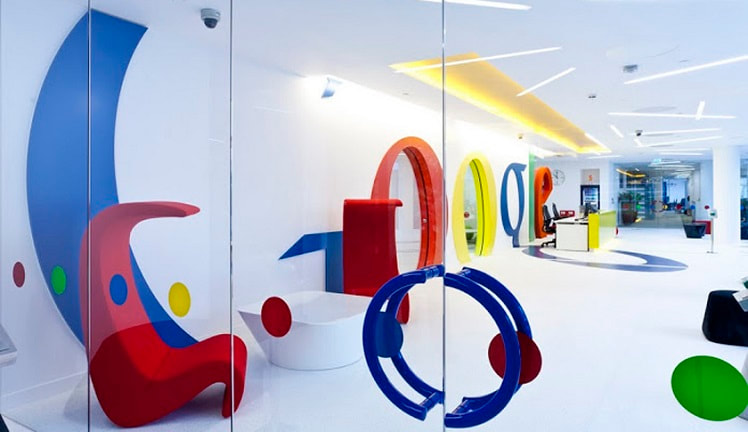 The data below refers to the latest quarter's data unless specified otherwise:

​“I’m really pleased with our continued progress in Search and in building two of our newer growth areas — YouTube, already at $15 billion in annual ad revenue, and Cloud, which is now on a $10 billion revenue run rate."
“In 2019 we again delivered strong revenue growth, with revenues of $162 billion, up 18% year over year and up 20% on a constant currency basis,” said Ruth Porat, Chief Financial Officer of Alphabet and Google. “To provide further insight into our business and the opportunities ahead, we’re now disclosing our revenue on a more granular basis, including for Search, YouTube ads and Cloud.”

The stock of Alphabet is trading at a lot closer to its 52 week high of $1500.58 than it is to its 52 week low of $1027.03 which to us is a clear indication that the sentiment and momentum of Alphabet's stock is very positive at this point in time. 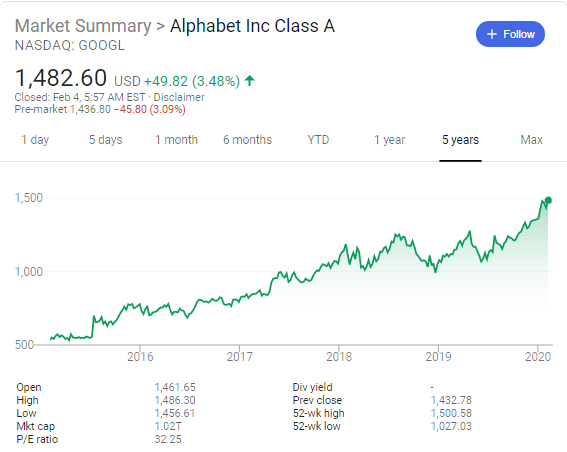 The extract below covers the latest earnings report of Alphabet as obtained from TheStreet.com

​Alphabet Inc. (GOOGL) - Get Report shares slipped lower in pre-market trading Tuesday after the Google parent unveiled a detailed fourth quarter earnings report that shed new light on its myriad business, but indicated mixed results from some of its key properties.  Google said earnings for the three months ending in December rose 20.2% from last year to $15.35 per share, well ahead of Street forecasts, but posted overall revenues of $46.08 billion, a 17.3% growth that missed analysts' estimates.  Google also provided detail on two of its key business units -- YouTube and Cloud -- for the first time, with both showing solid, but perhaps not spectacular, revenue growth rates that caught investors off-guard.

YouTube revenues were pegged at $4.717 billion and $15.1 billion for the year, compared to a thumbnail forecast of $25 billion, while Cloud services sales grew 53% from last year to $2.614 billion, trailing that of rival Microsoft's (MSFT)  Azure platform. Search revenues which rose 17% to $27.2 billion, also trailed growth rates at Facebook (FB) and Amazon (AMZN)

We usually recommend that long term fundamental or value investors look to enter a stock at at least 10% below our target price, which in this case is $1169.80, so we would suggest looking to buy Alphabet at around $1052 a stock.

Next earnings release of Alphabet