Amazon is currently one of the worlds largest companies in terms of market capital. And it forms part of the famed "FAANG" stocks. FAANG is an acronym for Facebook, Amazon, Apple, Netflix and Google.

​“We are ramping up to make our 25th holiday season the best ever for Prime customers — with millions of products available for free one-day delivery,” said Jeff Bezos, Amazon founder and CEO. “Customers love the transition of Prime from two days to one day — they’ve already ordered billions of items with free one-day delivery this year. It’s a big investment, and it’s the right long-term decision for customers. And although it’s counterintuitive, the fastest delivery speeds generate the least carbon emissions because these products ship from fulfillment centers very close to the customer — it simply becomes impractical to use air or long ground routes. Huge thanks to all the teams helping deliver for customers this holiday.”

​Business highlights for the 3rd quarter of 2019 for Amazon
​Financial Guidance
The following forward-looking statements reflect Amazon.com’s expectations as of October 24, 2019, and are subject to substantial uncertainty. Our results are inherently unpredictable and may be materially affected by many factors, such as fluctuations in foreign exchange rates, changes in global economic conditions and customer spending, world events, the rate of growth of the Internet, online commerce, and cloud services, and the various factors detailed below.
Fourth Quarter 2019 Guidance

The image below, obtained from Google, shows the stock price history of Amazon (NASDAQ: AMZN) over the last 5 years. And it's been a amazing time for Amazon (NASDAQ: AMZN). 5 years ago the stock was trading at around $305 and its currently trading at $1780.78. That's a impressive return of 483.86% over the last 5 years. The stock is trading at closer to its 52 week high of $2035 than it is to its 52 week low of $1307, which to us its an indication that the short term sentiment and momentum of Amazon is positive.

The concern for Amazon stockholders would be the strong negative reaction of Amazon's stock price after their 3rd quarter earnings release, which saw Amazon's stock decline by almost 7% 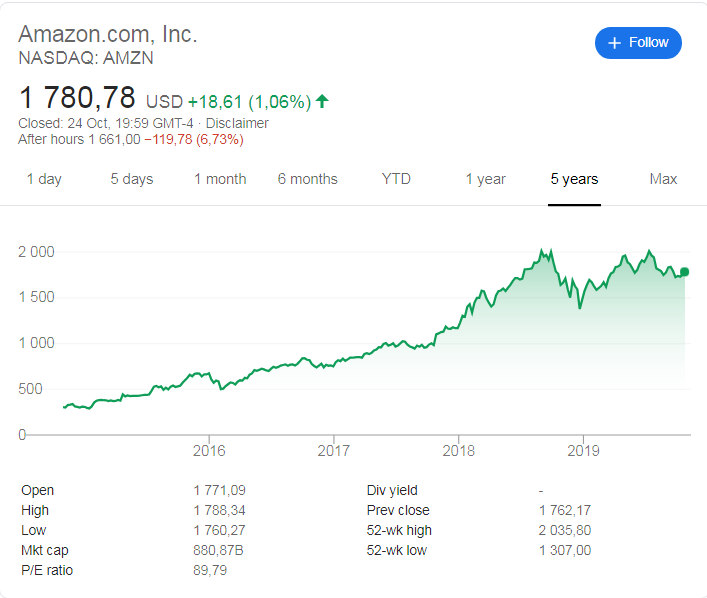 The extract below shows recent coverage of Amazon as obtained from TheStreet.com

​Shares of Amazon (AMZN - Get Report) were falling sharply after hours Thursday after the company reported a wide third quarter earnings miss, as well as weaker-than-expected revenue guidance for the fourth quarter.  TheStreet is live blogging Amazon's third quarter earnings report. Please join us!
Amazon reported earnings of $4.23 per share on revenue of $69.98 billion. Analysts were expecting the company to report earnings of $4.62 per share on revenue of $68.81 billion. And for the seasonally strong fourth quarter, Amazon said it expects revenue of $80 billion to $86.5 billion, below an $87.39 billion consensus estimate.

The big miss for Q3 was the company's AWS segment, which reported revenue of $9 billion, falling short of FactSet's consensus $9.1 billion estimate. Amazon shares were down more than 8% Thursday after-hours.  The company also said expects operating income to fall sharply from the previous year, to between $1.2 billion and $2.9 billion from the $3.8 billion it reported last year.
​
Read the full article here

So based on the earnings report of Amazon (NASDAQ: AMZN) what do we value Amazon (AMZN) stock at?  Based on their latest earnings report our valuation models provide a target price (full value price) for Amazon stock at $1170.50 a stock (down slightly from our 2nd quarter 2019 earnings valuation). We therefore believe the stock of Amazon is overvalued.

We would not advise long term fundamental or value investors buy into the stock of Amazon at its current price levels. Rather look to enter the stock of Amazon at least 10% below our target (full value) price of $1170.50. So a good entry point into Amazon would be around $1053.50. We believe the hype around FAANG stocks are chasing these stocks up and it's getting driven higher due to momentum and not due to value or fundamentals. We expect the stock price of Amazon to pull back to levels closer to our target (full value) price in coming weeks and months. And we wonder if the strong negative market reaction to Amazon's earnings in after hours trade is the start of the decline to more realistic valuation levels.