PITTSBURGH--(BUSINESS WIRE)-- American Eagle Outfitters, Inc. (NYSE: AEO) today reported EPS of $0.38 for the quarter ended August 3, 2019, compared to $0.34 for the quarter ended August 4, 2018. Excluding restructuring charges of $0.01, the company’s adjusted EPS was $0.39. Second quarter total net revenue included $40 million recognized for license royalties from a third-party operator of AE stores in Japan, which contributed $0.15 of EPS in the second quarter.
​
Jay Schottenstein, AEO’s Chairman and Chief Executive Officer commented, “We had a number of wins and accomplishments in the second quarter, yet we were disappointed to report operating results below our expectations. We faced challenges largely stemming from underperformance in certain seasonal categories and a delayed start to back-to-school. Despite this, we delivered our 18th consecutive quarter of positive consolidated comparable sales growth. We were also encouraged to see many areas of the business perform well, including continued strong momentum in AE Jeans, Aerie and our digital channel — all major growth priorities. The AE team has taken quick action to strengthen the business and we are pleased to see an improvement in third quarter-to-date sales. Our brands remain strong and we are well-positioned to continue to grow and gain market share.”

​Third Quarter Outlook
Based on an anticipated comparable sales increase in the low to mid single digits, management expects third quarter 2019 EPS to be approximately $0.47 to $0.49. This guidance excludes potential asset impairment and restructuring charges. Last year the company reported EPS of $0.48 for the third quarter.

The image below shows the stock price history of American Eagle Outfitters for the last 5 years. And the stock hasn't done much in terms of returns offers to investors over the last 5 years, with the price increasing from around $13 to just over $16 its trading at right now. It has seen major ups and downs over the 5 year period but in all hasn't changed much over a 5 year period. It is also trading at a lot close to its 52 week low than it is to its 52 week high which signals to us that recent sentiment towards the stock has been negative. 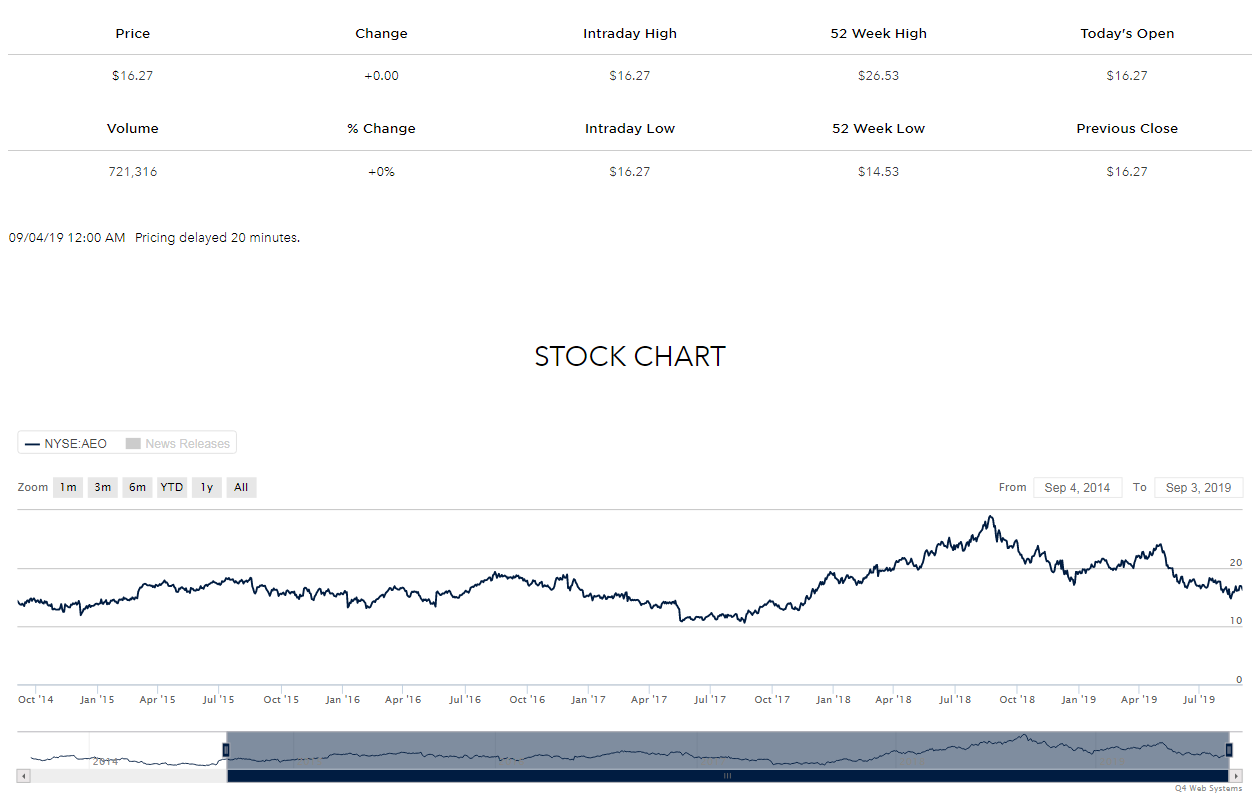 So based on AEO's earnings report what do we value the stock price at? Is there value to be had in the share? Based on the group's latest earnings report our valuation models provides a target price on American Eagle Outfitters of $24.00 a share. We therefore believe American Eagle Outfitter's stock is undervalued and we expect the stock price to tick upwards towards its 52 week high