Arch Coal (NYSE: ARCH) is the leading producer of metallurgical coal and the second largest producer of thermal coal in the United States, with a streamlined portfolio of large, modern, low-cost mines and a high-quality reserve base. Arch’s operations have a proven track record of generating cash through all phases of the market cycle, with significant upside in rising price environments. With its solid financial foundation, clean balance sheet and top-tier assets, Arch is exceptionally well-positioned to capitalize on strengthening metallurgical coal markets and recovering thermal coal markets 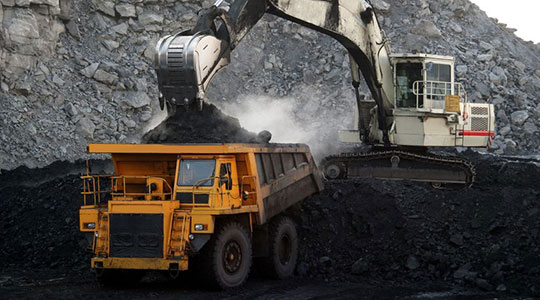 ​"Arch turned in another strong operational performance during the quarter just ended, led by our core Metallurgical segment, which achieved record margins, an excellent cost performance and solid shipping volumes," said John W. Eaves, Arch's chief executive officer.  "At the same time, our legacy thermal operations contributed meaningful levels of cash flow despite heavy flooding that disrupted rail movements in the nation's interior, and we announced a joint venture with Peabody Energy that will enhance the free cash flow potential of our thermal assets still further by unlocking significant synergies.  In addition, we are pleased to report that we have made excellent progress in the development of Leer South, which is ahead of schedule and now expected to commence longwall production in the third quarter of 2021."

During the second quarter, Arch returned $70.8 million to shareholders via buybacks and dividends under its ongoing capital return program, despite a temporary suspension of the buyback program associated with the announcement of the joint venture with Peabody Energy.  Since launching the capital return program in May 2017, Arch has returned a total of $796.4 million to shareholders via share repurchases coupled with regular dividend payments.  At quarter-end, Arch had board authorization to expend an additional $324.5 million on share buybacks, out of a total authorization of $1.05 billion.
​
"We remain sharply focused on driving operational excellence across our portfolio to generate long-term, sustainable returns for our shareholders," Eaves added.  "With excellent momentum in all facets of our business, we expect to have sufficient capacity to return as much or more capital to shareholders in full-year 2019 as we averaged in 2017 and 2018, while also funding the development of Leer South."

​Key Market Developments
Global coking coal markets remained strong in the second quarter, with High-Vol A prices averaging $197 per metric ton FOB the U.S. East Coast during the period.  While prices have pulled back more than 10 percent since that time, Arch continues to see coking coal supply and demand in relative balance – although further weakening in the global economy and compressed steel margins could serve to dampen the near-term market outlook.

Through the first half of 2019, coking coal markets were well-supported by underlying market fundamentals.  Global steel output was up 5 percent through May, according to the World Steel Association, as was pig iron output.  Economic stimulus measures drove robust steel demand growth in China, and North American steel production and blast furnace capacity factors increased materially.  Weaker economic growth and industrial output represented a persistent concern in Europe, but indigenous European coking coal supply remained under pressure.  Chinese coking coal imports increased more than 20 percent through the first half of 2019.  Indian import activity got off to a lackluster start, but sustained and significant steel sector expansion is still projected in that country.

On the supply side, Arch views investment in global coking coal supply as insufficient given projected growth in global steel output and the impact of ordinary reserve depletion at existing metallurgical mines.  Australian coking coal exports were up just 2 percent through May – well off the pace set in 2016, which was the country's high-water mark for such exports.  In addition, U.S. coking coal exports continued to undershoot 2018 levels despite a consistently strong pricing environment in recent years, with metallurgical exports down an estimated 10 percent through May.  While metallurgical exports from both Russia and Canada were up year-to-date, those volume increases mainly served to offset U.S. declines. "Despite the recent pull-back in coking coal prices, our view of coking coal markets over the intermediate and longer term remains positive," Lang said.  "Importantly, with our highly competitive cost structure and high-quality coking coals, we are structured to compete, prosper and generate significant value for our shareholders across a wide range of market scenarios."

Outlook
"We remain highly confident in Arch's clearly defined strategy for long-term value creation and growth," Eaves said.  "We are sharply focused on maximizing returns by executing on our strategy, and see multiple drivers for future value creation.  These drivers include the continuation of our robust and proven capital return program; the development of our world-class, Leer South longwall mine; the transition of the Leer mine into the heart of its reserve base; and the completion of our recently announced joint venture with Peabody Energy.  We believe these drivers – coupled with continued, strong operational execution – will position Arch to deliver long-term, sustainable returns for our shareholders."

The stock of Arch Coal is trading at a lot closer to its 52 week low than it is to its 52 week high, which to us is an indication that the short term sentiment and momentum of Arch Coal's stock is very negative at this point in time. 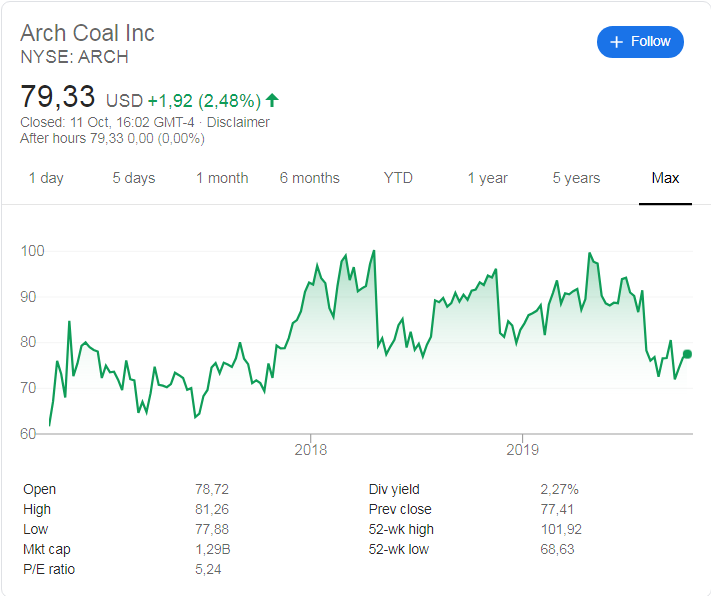 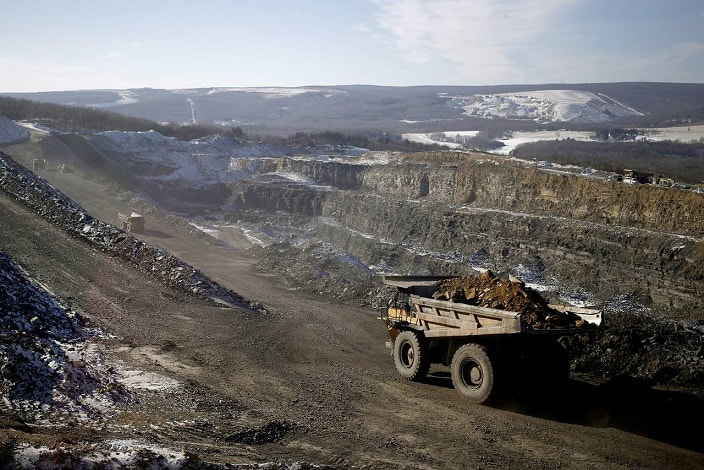 We usually recommend that long term fundamental or value investors look to enter the stock at 10% below our target (full value) price which in this case is $114.20, so a good entry point into Arch Coal's stock would be at $102.80 or below. Considering the fact that Arch Coal is trading at well below our suggested entry point into the group's stock we rate Arch Coal as a buy.

We believe that the medium and long term outlook for the group is still very positive (even with global economic growth slowing) and believe the current stock price represents a good buying opportunity into Arch Coal.