Gasoline prices averaged $3.959 a gallon in the Los Angeles-Long Beach-Anaheim area in November 2019, the U.S. Bureau of Labor Statistics reported. Assistant Commissioner for Regional Operations Richard Holden noted that area gasoline prices were higher than last November when they averaged $3.640 per gallon. Los Angeles area households paid an average of 19.0 cents per kilowatt hour (kWh) of electricity in November 2019, higher than the 18.4 cents price per kWh paid in November 2018. The average cost of utility (piped) gas at $1.100 per therm in November was lower than the $1.182 per therm spent last year. (Data in this release are not seasonally adjusted; accordingly, over-the-year-analysis is used throughout.)

Average gasoline prices in the Los Angeles-Long Beach - Anaheim area for November over the last 5 years
The 19.0 cents per kWh Los Angeles households paid for electricity in November 2019 was 42.9 percent more than the nationwide average of 13.3 cents per kWh. Last November, electricity costs were 37.3 percent higher in Los Angeles compared to the nation. In the past five years, prices paid by Los Angeles area consumers for electricity exceeded the U.S. average by 36.8 percent or more in the month of November.
Prices paid by Los Angeles area consumers for utility (piped) gas, commonly referred to as natural gas, were $1.100 per therm, 4.0 percent more than the national average in November 2019 ($1.058 per therm). A year earlier, area consumers paid 15.9 percent less per therm for natural gas compared to the nation. In the Los Angeles area over the past five years, the per therm cost for natural gas in November has varied between 4.0 percent and 24.5 percent above the U.S. average.
As we mentioned at the start of the article, the unadjusted (not seasonally adjusted) inflation rate of the west has been a lot higher in recent years than the rest of the the regions of the USA. The image below, obtained from the BLS shows the unadjusted 12 month percentage change per region in the USA since November 1999. In the graphic above we focused on the inflation rate of the following regions:What is clear from the image below is that the inflation rate of the west of the USA is far greater than that of the other regions we looked at. In coming weeks we will dig a little deeper into the possible reasons as to why this is the case. 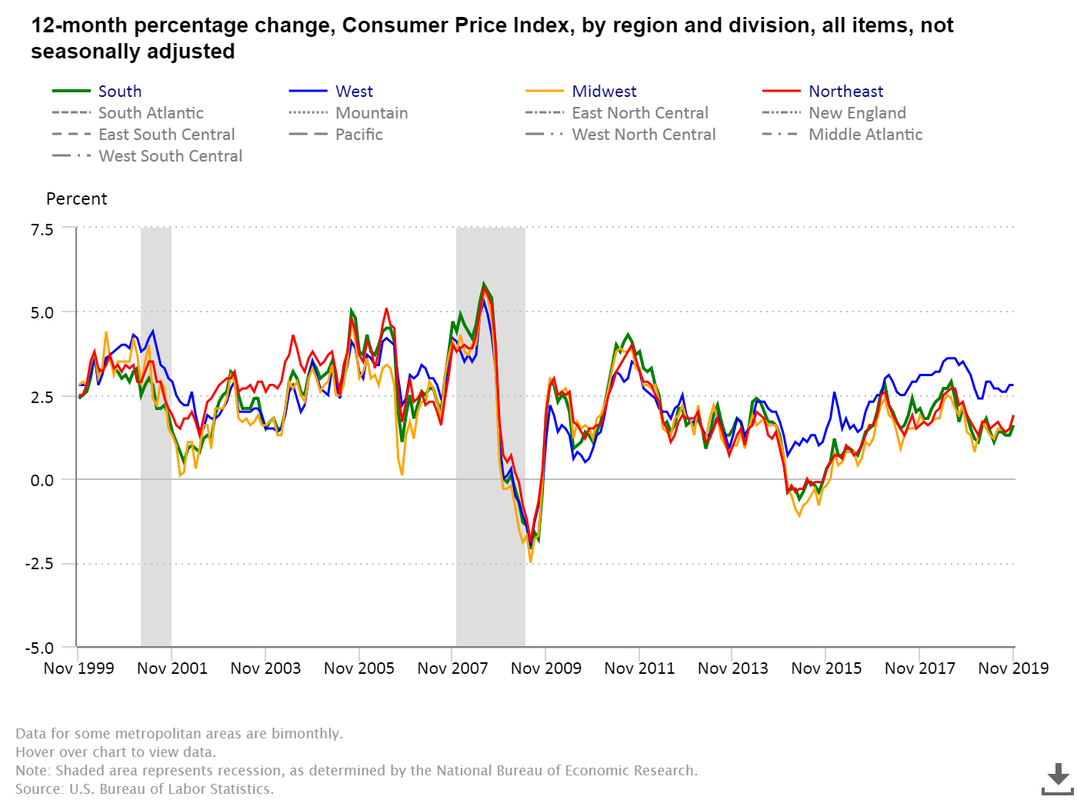