Brinker International, Inc. is one of the world's leading casual dining restaurant companies. Based in Dallas, Texas, as of June 26, 2019, Brinker owned, operated, or franchised 1,665 restaurants under the names Chili's® Grill & Bar (1,612 restaurants) and Maggiano's Little Italy® (53 restaurants). Below an image of two storefronts representing Brinker International's two main brands. 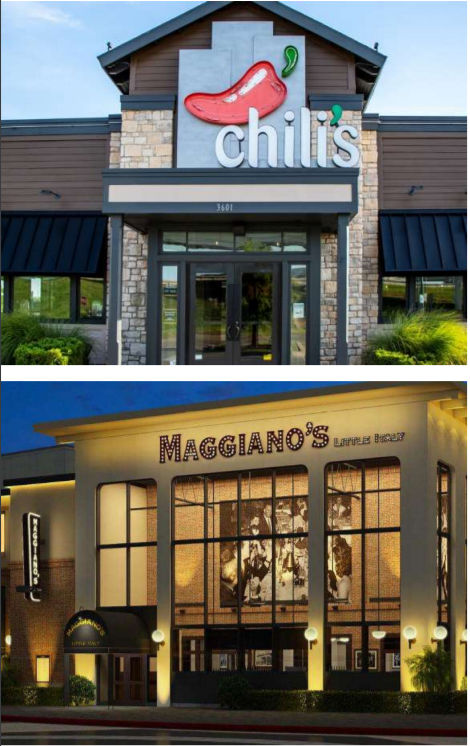 Brinker International's management commentary on the results and earnings guidance

​"The fourth quarter marked our 5th consecutive quarter of positive same store sales and our sixth consecutive quarter to out-perform the category in traffic", said Wyman Roberts, CEO and President. "Our continued focus on improving the guest experience and providing everyday value is a long term strategy that continues to deliver solid results."

​FISCAL 2020 OUTLOOK
We estimate earnings per diluted share, excluding special items, will be in the range of $4.15 to $4.35. We believe providing estimated guidance for fiscal 2020 earnings per diluted share, excluding special items, provides investors the appropriate insight into our ongoing operating performance. Estimated earnings are based on the following:
We are unable to reliably forecast special items such as restaurant impairments, restaurant closures, reorganization charges and legal settlements without unreasonable effort. As such, we do not present a reconciliation of forecasted non-GAAP measures to the corresponding GAAP measures. If special items are reported during fiscal 2020, reconciliations to the appropriate GAAP measures will be provided.

The image below shows the stock price history of Brinkers International (NYSE: EAT) for the last 5 years. And its not been a good time for EAT stockholders. 5 years ago the stock was trading at $50 a stock and its currently trading at $43.50. That is a negative return of 13%. And while the return is not that negative, the opportunity cost of holding Brinkers stock while other stocks we valued recently saw returns of well above 100% over the same period is significant. Brinkers International's stock is also trading at a lot closer to it 52 week low than it is to its 52 week high, another indication that short term sentiment and momentum of the stock being negative. 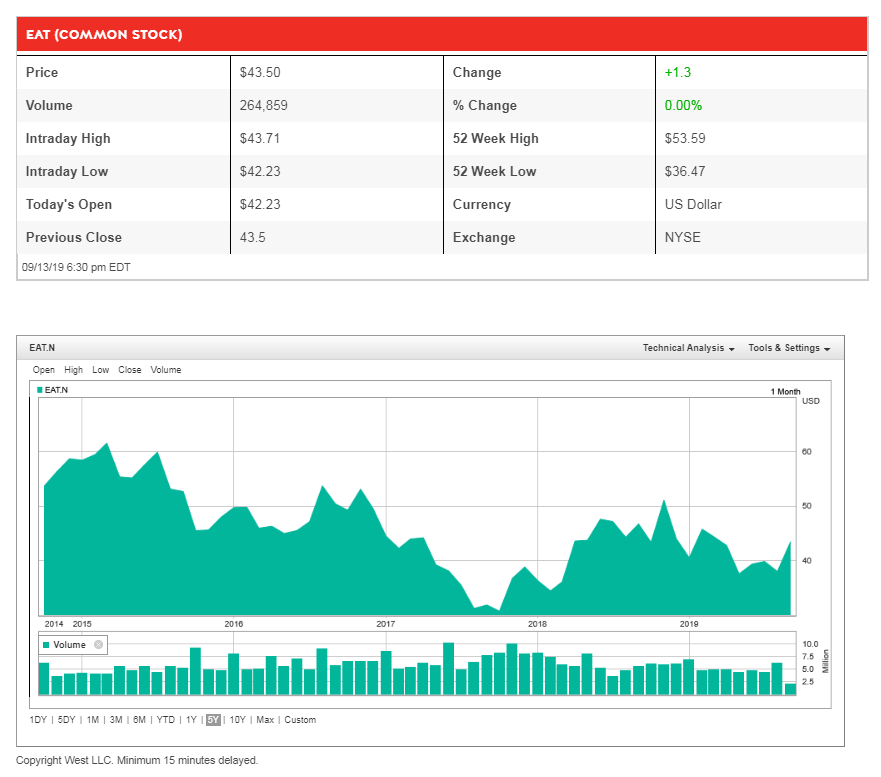 Value investing is always a very popular strategy, and for good reason. After all, who doesn’t want to find stocks that have low PEs, solid outlooks, and decent dividends? Fortunately for investors looking for this combination, we have identified a strong candidate which may be an impressive value; Brinker International, Inc. (EAT - Free Report) .

Brinker in Focus
EAT may be an interesting play thanks to its forward PE of 9.8, its P/S ratio of 0.5, and its decent dividend yield of 3.8%. These factors suggest that Brinker is a pretty good value pick, as investors have to pay a relatively low level for each dollar of earnings, and that EAT has decent revenue metrics to back up its earnings.

But before you think that Brinker is just a pure value play, it is important to note that it has been seeing solid activity on the earnings estimate front as well. For current year earnings, the consensus has gone up by 2.7% in the past 30 days, thanks to six upward revision in the past one months compared to none lowers. This estimate strength is actually enough to push EAT to a Zacks Rank #3 (Hold), suggesting it is poised to outperform.
So really, Brinker is looking great from a number of angles thanks to its PE below 20, a P/S ratio below one, and a strong Zacks Rank, meaning that this company could be a great choice for value investors at this time.
​
Read the full article here