1870:
With $5,500 in saved and borrowed money, George Garvin Brown, a young pharmaceuticals salesman in Louisville, Kentucky, starts J.T.S. Brown and Bro. with his half-brother. They sell whisky in sealed glass bottles to assure its quality, an innovative approach at a time when whisky is commonly sold by the barrel. Old Forester Kentucky Straight Bourbon Whisky is the flagship brand. After several name changes and the dissolution of the original partnership, George Garvin enters in a partnership with George Forman, his accountant and friend, and Brown-Forman is created

Brown-Forman commentary on the results and earnings guidance

Louisville, KY, August 28, 2019 – Brown-Forman Corporation (NYSE: BFA, BFB) reported financial results for its first quarter of fiscal 2020. For the first quarter, the company reported net sales of $766 million, flat both on a reported and underlying basis compared to the same prior-year period. In the quarter, reported operating income declined 6% to $248 million (-8% on an underlying basis) and diluted earnings per share declined 6% to $0.39. Lawson Whiting, the company’s President and Chief Executive Officer said, “Our first quarter results came in largely as anticipated considering the year-over-year drag from tariffs and timing of customer orders. Our takeaway trends remain healthy in most of our major markets globally, with particularly improving trends in the United States, our largest market. We believe we remain on track to deliver another year of solid underlying net sales and underlying operating income growth driven by the Jack Daniel’s family of brands. This includes the benefit we expect from the launch of Jack Daniel’s Tennessee Apple beginning in October, as well as the continued strength of our portfolio of premium bourbons and tequilas.”

Whiting further added, “We continue to invest behind the momentum of our business, by not only absorbing much of the tariff costs, but thoughtfully re-allocating and reinvesting back into our brands and our people, including the recent announcement of establishing our own distribution platform in the United Kingdom. We believe that investing in momentum will position us well for the next generation of growth and continue to deliver superior returns for our shareholders.”

Fiscal Year 2020 Outlook
Growing uncertainty around the global economic and geopolitical environment combined with the competitive landscape in the developed world could impact our future results. Despite these factors, the company is reaffirming its prior full year fiscal 2020 guidance of:
1. Underlying net sales growth of 5% to 7%.
2. Underlying operating income growth of 3% to 5%.
3. Diluted earnings per share of $1.75 to $1.85

The image below shows the stock price history of Brown-Forman over the last 5 years. 5 years ago the stock price was around $35 a share, today its trading at $58.99 a share. Strong increase in the share price over the last 5 years which has rewarded investors handsomely. While the gains are not astronomical like certain IT/Entertainment stocks such as Netflix it has provided investors with consistent growth over time. Slow and steady always wins the race. Dont believe us, think about the tortoise and the hare, 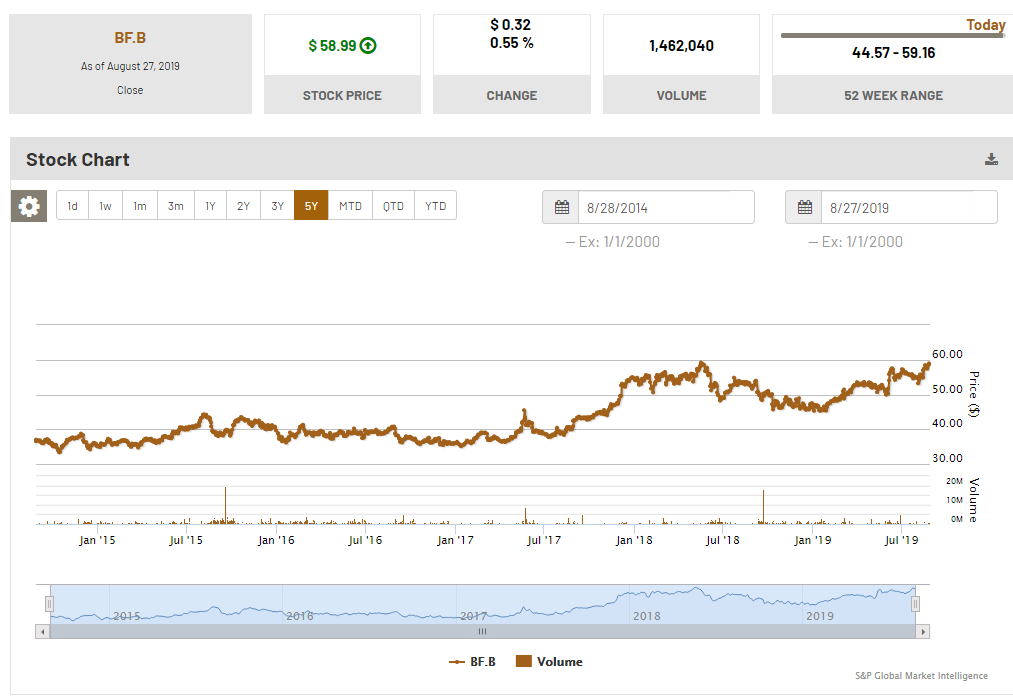