Fuel - For the quarter, average fuel margin was 24.4 cents per gallon, while same-store gallons sold were down 2.0%. "The combination of our price optimization efforts along with a favorable fuel margin environment allowed us to grow gross profit dollars by over 22% for the quarter," said Rebelez. "We are excited about the advancements made with the fuel price optimization tool. We have gained significant agility to capture additional fuel margin while maintaining a competitive pricing structure." Total gallons sold for the quarter were up 2.9% to 619.1 million gallons while gross profit dollars increased to $151.0 million.

Grocery and Other Merchandise - For the quarter, same-store sales were up 3.2% with average margin of 31.3%. Average margin was adversely impacted by a $6.6 million out-of-period inventory adjustment, which, if excluded, would have resulted in average margin of 32.3%. "We are encouraged by the momentum in this category and are optimistic about the expected impact of our current roll out of the inside store price optimization tool," said Rebelez. For the first quarter, total grocery and other merchandise revenue increased 6.7% to $687.9 million, and gross profit dollars increased to $215.5 million.
​
Prepared Food and Fountain - Same-store sales for the quarter were up 1.6% with average margin of 62.2%. "As we continue our digital transformation journey, we are highly focused on the pricing and promotional capabilities we are adding," said Rebelez. "We believe the previously launched e-commerce website and new mobile app, when combined with our future loyalty program, will significantly enhance the overall guest experience." Total prepared food and fountain revenue increased 5.3% to $295.9 million in the first quarter while gross profit dollars grew to $184.0 million.
​
Operating Expenses - For the first quarter, total operating expenses increased 5.7% to $379.8 million. The increase in total operating expenses was primarily attributable to operating 76 more stores than the same quarter in the prior year. Same-store operating expenses excluding credit card fees were up 2.5% for the quarter. "We continue to emphasize at all levels of the company the importance of maintaining strong discipline over operating expenses," noted Rebelez. "We will remain focused on identifying additional opportunities to improve expense management throughout the fiscal year."

​The Company has 11 acquisition stores under agreement to purchase and a new store pipeline of 107 sites, including 35 under construction as of July 31, 2019. "Development plans are underway for a third distribution center, which is scheduled to break ground in the southwest part of our territory later this year," said Rebelez. "Upon completion, this will provide immediate cost savings and support our future expansion strategy."

Share Repurchase Program
The Company has $300 million remaining on its authorization from March 2018. There were no repurchases made against that authorization in the first quarter.

Dividend
At its September meeting, the Board of Directors declared a quarterly dividend of $0.32 per share. The dividend is payable November 15, 2019 to shareholders of record on November 1, 2019. 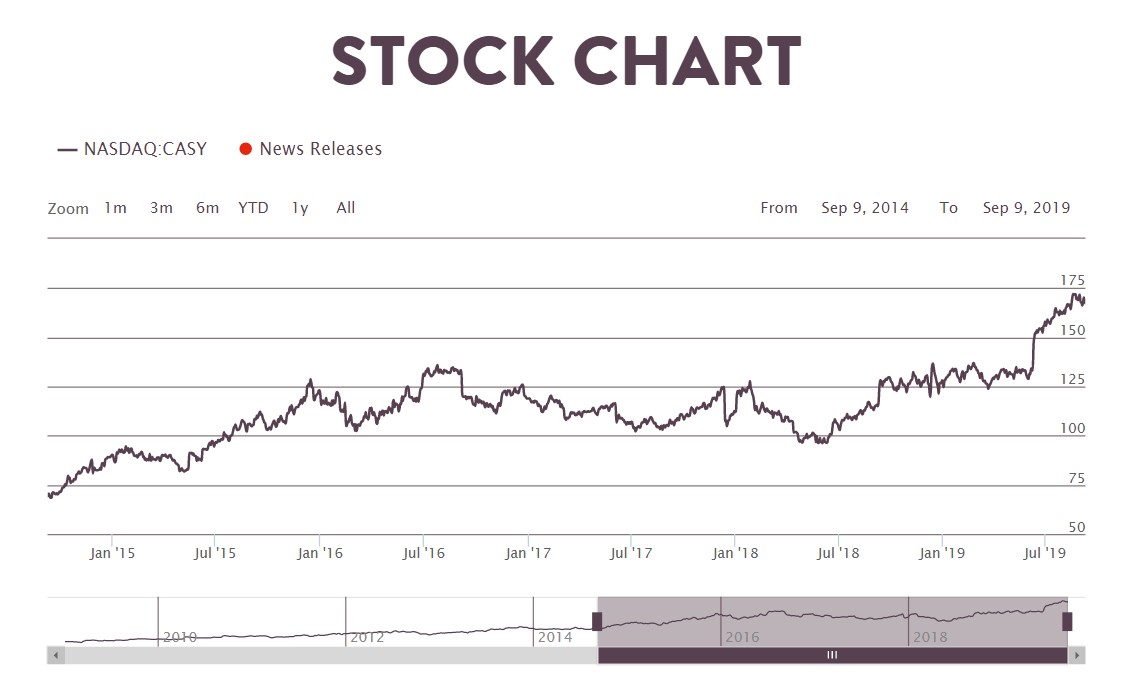 The extract below was obtained from Zacks.

Casey's General Stores (CASY) came out with quarterly earnings of $2.31 per share, beating the Zacks Consensus Estimate of $2.05 per  share. This compares to earnings of $1.90 per share a year ago. These figures are adjusted for non-recurring items. This quarterly report represents an earnings surprise of 12.68%. A quarter ago, it was expected that this convenience store chain would post earnings of $0.42 per share when it actually produced earnings of $0.68, delivering a surprise of 61.90%.

Over the last four quarters, the company has surpassed consensus EPS estimates four times. Casey's, which belongs to the Zacks Retail - Convenience Stores industry, posted revenues of $2.63 billion for the quarter ended July 2019, surpassing the Zacks Consensus Estimate by 0.82%. This compares to year-ago revenues of $2.59 billion. The company has topped consensus revenue estimates three times over the last four quarters. The sustainability of the stock's immediate price movement based on the recently-released numbers and future earnings expectations will mostly depend on management's commentary on the earnings call.