About The Children's Place

​The Children’s Place is the largest pure-play children’s specialty apparel retailer in North America.  The Company designs, contracts to manufacture, sells at retail and wholesale, and licenses to sell fashionable, high-quality merchandise at value prices, primarily under the proprietary “The Children’s Place,” “Place” and “Baby Place” brand names.  As of August 3, 2019, the Company operated 961 stores in the United States, Canada and Puerto Rico, an online store at www.childrensplace.com, and had 225 international points of distribution open and operated by its eight franchise partners in 19 countries. 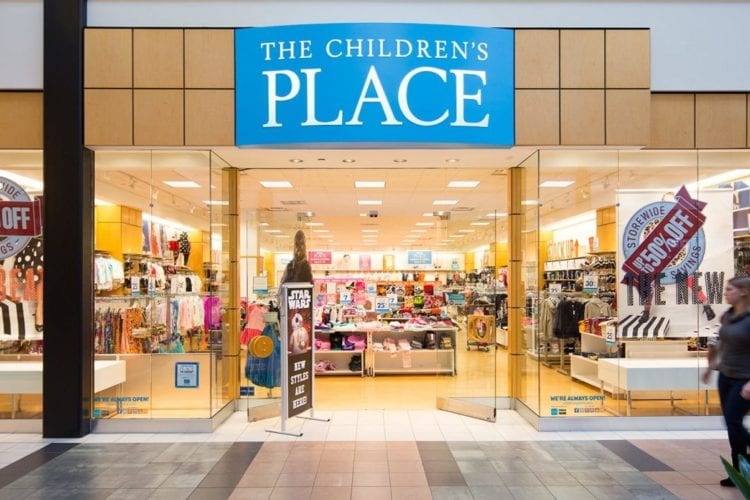 Jane Elfers, President and Chief Executive Officer announced, “Driven by a strong back-to-school season, we delivered a positive 0.8% comp in Q3 on top of a positive 9.5% comp in Q3 a year ago and EPS near the upper-end of our guided range, despite multiple headwinds, including prolonged warmer weather into late October, which negatively impacted sales of colder weather product in key regions across the country.”

Ms. Elfers continued, “Quarter-to-date, our digital penetration continues to increase and our AURs are strengthening as we focus on disciplined inventory management in a promotional environment. However, due to meaningfully weaker than planned mall traffic quarter-to-date, we are lowering our outlook for Q4.”
​
Ms. Elfers concluded, “With respect to Gymboree, we are on track to relaunch this iconic brand in early 2020 with an enhanced, personalized, online shopping experience at gymboree.com, and with over 200 shop-in-shop locations in select The Children’s Place stores across the U.S. and Canada. We recently showcased our spring 2020 Gymboree collections at a media event supporting the relaunch of the brand and the response from the attendees was overwhelmingly positive. In addition, Gymboree fans have posted thousands of positive comments on our Gymboree social media sites, sharing their excitement for the relaunch, and further demonstrating the extraordinary level of passion exhibited for the iconic Gymboree brand.”
Store Openings and Closures
Consistent with the Company’s store fleet optimization initiative, the Company opened six stores and closed 12 stores in the three months ended November 2, 2019. The Company ended the quarter with 955 stores and square footage of 4.5 million, a decrease of 3.2% compared to the prior year. Since our fleet optimization initiative was announced in 2013, the Company has closed 238 stores.

Capital Return Program
During the three months ended November 2, 2019, the Company repurchased 414 thousand shares for approximately $33 million, inclusive of shares repurchased and surrendered to cover tax withholdings associated with the vesting of equity awards held by management. The Company also paid a quarterly dividend of approximately $9 million, or $0.56 per share, in the quarter.

The stock of Children's Place is trading at a lot closer to its 52 week low of $54.28 than it is to its 52 week high of $116.84 which to us is a clear indication that the short term sentiment and momentum of Children's Place stock is very negative. This is further shown by the fact that the stock is down over 23% for the day (11 December 2019) following the release of their results. We do however believe the market is overreacting (but discuss this in more detail later in the article). 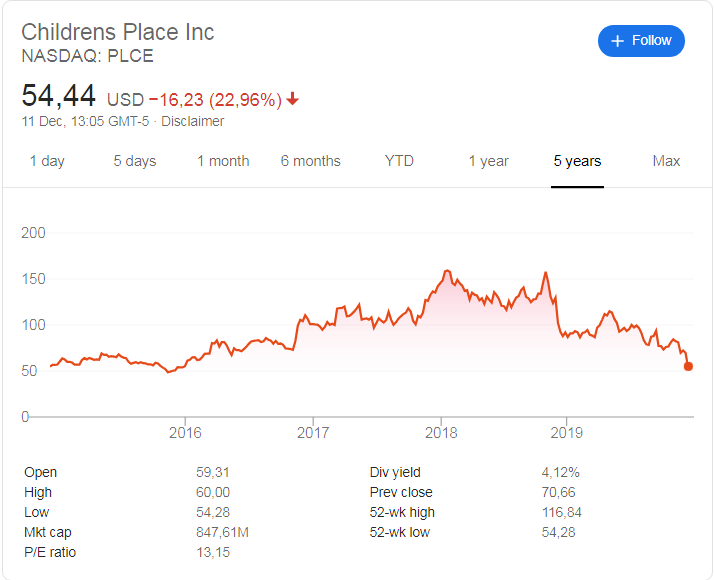 Recent coverage of The Children's Place

The extract below discusses the previous earnings report of Te Children's Place as obtained from TheStreet.com
​
Children's Place (PLCE) - Get Report plunged Wednesday after the specialty apparel chain reported a big downturn in quarterly earnings and sales. The stock price of the chain, which operates 961 stores in North America, dived 7.72% to $71.99. Children's Place reported earnings of 10 cents a share in the second quarter, or $1 million, down from 45 cents and $7.5 million during the same period last year.

The retailer reported a decline in net sales of 6.3% to $420.5 million in the three months ended Aug. 3, from $448.7 million a year ago. Comparable-store sales were down 3.8%, compared to a 13.8% increase in the second quarter of 2018. In a press statement, CEO Jane Elfers said integration of the bankrupt Gymboree chain, which Children's Place acquired for $76 million earlier this year, along with rights to the Crazy 8 brand, weighed on the latest quarterly results. 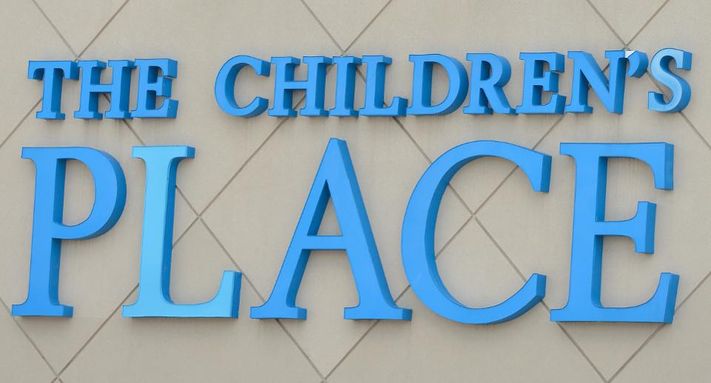 We usually recommend that long term fundamental or value investors look to enter a stock at least 10% below our target (full value) price wich in this case is $77.90 . We therefore believe a good entry point into The Children’s Place stock is at $70.10 or below. Since the stock of The Children’s Place is trading at well below our suggested entry point following the sharp decline in its stock price today we rate the stock of Children's Place a buy. We believe that once the initial knee-jerk reaction following their results blow over they will kick upwards to levels closer to our target price in coming weeks and months

Next earnings release of The Children's Place