Costco currently operates 783 warehouses, including 544 in the United States and Puerto Rico, 100 in Canada, 39 in Mexico, 29 in the United Kingdom, 26 in Japan, 16 in Korea, 13 in Taiwan, 11 in Australia, two in Spain, one in France, one in Iceland, and one in China. Costco also operates e-commerce web sites in the U.S., Canada, the United Kingdom, Mexico, Korea and Taiwan.

​Total and comparable sales were negatively impacted by approximately one-half percent due to Thanksgiving occurring a week later this year. E-commerce sales in the quarter were negatively impacted by an estimated 12 percentage points. Net income for the quarter was $844 million, or $1.90 per diluted share, compared to $767 million, or $1.73 per diluted share, last year. This year’s first quarter reflects a $77 million ($0.17 per diluted share) tax benefit related to stock-based compensation, compared to a $59 million ($0.13 per diluted share) similar benefit last year.
​Costco currently operates 785 warehouses, including 546 in the United States and Puerto Rico, 100 in Canada, 39 in Mexico, 29 in the United Kingdom, 26 in Japan, 16 in Korea, 13 in Taiwan, 11 in Australia, two in Spain, and one each in Iceland, France, and China. Costco also operates e-commerce sites in the U.S., Canada, the United Kingdom, Mexico, Korea, Taiwan, and Japan.

The image below, obtained from Google, shows the stock price history of Costco Wholesale for the last 5 years. And it's been a very good time for Costco  stockholders. 5 years ago the stock was trading at around $129 a stock and its currently trading at $297.34 a stock. That's a very strong return of 130.5% provided by Costco over the last 5 years.

​The stock of Costco is trading at a lot closer to its 52 week high of $307.34 than it is to its 52 week low of $189.51 which to us is a clear indication that the short term sentiment and momentum of Costco stock is very positive. 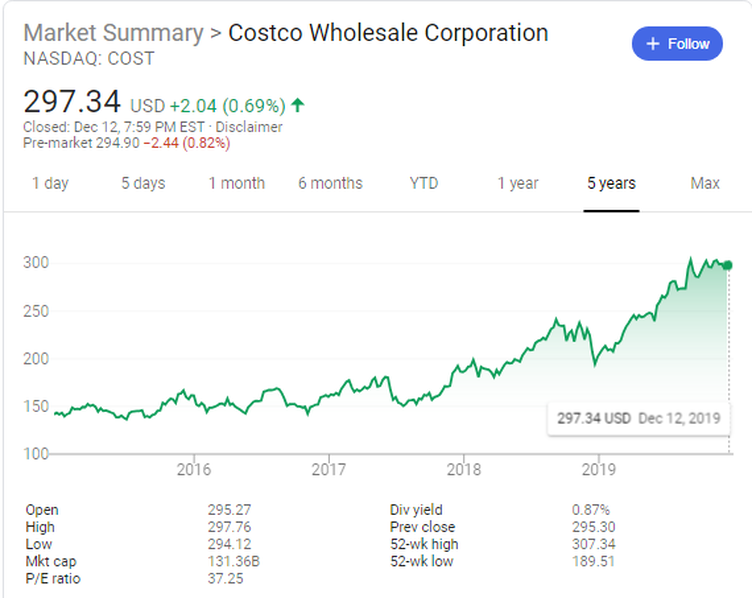 The extract below shows some of the latest coverage on Costco Wholesale obtained from TheStreet.com

​Costco (COST) - Get Report shares were wavering in after-hours trading after the membership-based retailer reported fiscal first-quarter earnings per share advanced 9.8%, stronger than analyst estimates. For the quarter ended Nov. 24 Costco earned $1.90 a share against $1.73 in the year-earlier quarter.
A survey of analysts by FactSet had been looking for earnings of $1.73 a share. The Issaquah, Wash., company on Dec. 4 had reported that net sales rose 5.6% to $36.24 billion from $34.31 billion.

Comparable sales companywide for the quarter rose 4.3%, or 5% excluding the impact of gasoline prices and foreign-exchange fluctuations. U.S. comparable sales rose 4.7%, or 5% reflecting the exclusions 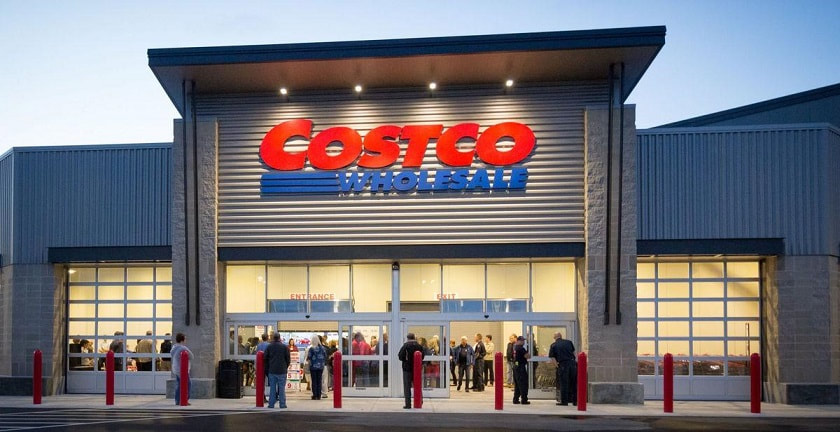 We usually suggest long term investors look to enter a stock at least 10% below our target (full value) price which in this case is $224.30. So a good entry point into Costco stock would be at $201.90 or below.  We expect the stock of Costco Wholesale to pull back from current levels to levels closer to our target (full value) price in coming weeks and months as even at $224.30 we were fairly generous regarding the group's short and medium term prospects in our valuation models.

Next earnings release of Costco Wholesale