Costco currently operates 783 warehouses, including 544 in the United States and Puerto Rico, 100 in Canada, 39 in Mexico, 29 in the United Kingdom, 26 in Japan, 16 in Korea, 13 in Taiwan, 11 in Australia, two in Spain, one in France, one in Iceland, and one in China. Costco also operates e-commerce web sites in the U.S., Canada, the United Kingdom, Mexico, Korea and Taiwan.

The image below, obtained from Google, shows the stock price history of Costco Wholesale for the last 5 years. And it's been a very good time for Costco  stockholders. 5 years ago the stock was trading at around $129 a stock and its currently trading at $289 a stock. That's a very strong return of 124% provided by Costco over the last 5 years. The stock of Costco is trading at a lot closer to its 52 week high of $307.34 than it is to its 52 week low of $189.51 which to us is a clear indication that the short term sentiment and momentum of Costco stock is very positive. But it must be saids markets reacted negatively in pre-market trade with the stock being down -1.64% or -$4.75 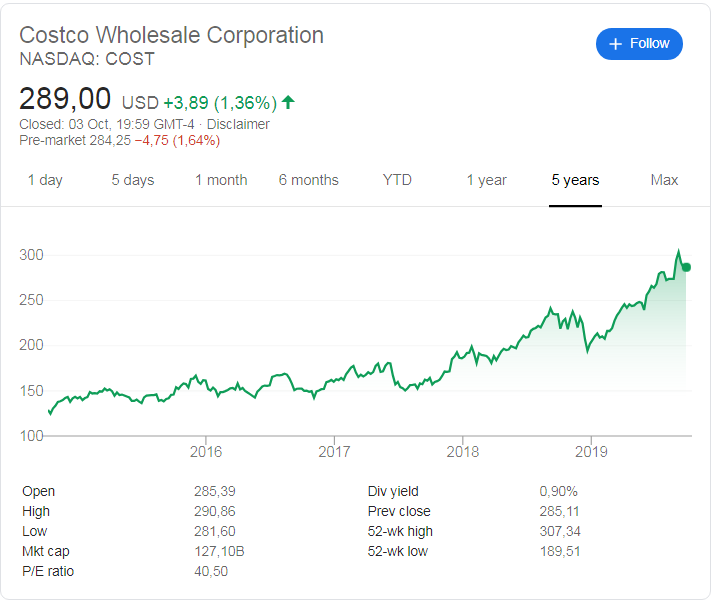 The extract below shows some of the latest coverage on Costco Wholesale obtained from TheStreet.com

​Costco Wholesale Corp. (COST) shares were indicated lower in pre-market trading Friday after the discount hypermarket posted softer-than-expected fourth quarter sales that offset solid earnings and membership growth. Costco said diluted earnings for the three months ending on September 1, the company's fiscal fourth quarter, came in a $2.47 per share, up 4.6% from the same period last year. Stripping away 22 cent tax-related charge, which the company disputes, earnings were pegged at $2.69 per share, well ahead of the Street consensus forecast of $2.56. Group revenues, Costco said, rose 7% to $47.5 billion, but fell just shy of analysts' forecasts of a $47.7 billion tally.

Costco said comparable sales rose 5.1%, missing the Refinitiv forecast of 5.25%, but membership renewal rates in both the U.S. and Canada (90.9%) and in markets around the world (88.4%) continued to trend near record highs. Costco is also planning to open a second outlet in Shanghai, where it has 20,000 registered members, and said it was working to mitigate the impact of import tariffs linked to the U.S.-China trade dispute.
​
"Since the beginning of these tariffs over a year ago, we continue to be active in managing and we're possibly mitigating the impact where we can" CFO Richard Galanti told investors on a conference call late Thursday. " In some cases, we've reduced our commitments on certain items. And again, just on the impact of what we expect, we look at alternative country sourcing where possible and feasible and although again, there's a limited amount of that ability to do that."
​
Read the full article here

So what is Costco Wholesale (NASDAQ: COST) stock worth based on the release of their latest earnings report? Based on their earnings report and the guidance provided our valuation models provide a target (full value) price for Costco of $221 a stock. We therefore believe that the stock is overvalued.

We usually suggest long term investors look to enter a stock at least 10% below our target (full value) price which in this case is $221. So a good entry point into Costco stock would be at $198.9 or below.  We expect the stock of Costco Wholesale to pull back from current levels to levels closer to our target (full value) price in coming weeks and months as even at $221 we were fairly generous regarding the group's short and medium term prospects in our valuation models.