Coupa Software is the cloud platform for business spend. We deliver “Value as a Service” by helping our customers maximize their spend under management, achieve significant cost savings and drive profitability. Coupa provides a unified, cloud-based spend management platform that connects hundreds of organizations representing the Americas, EMEA, and APAC with millions of suppliers globally. The Coupa platform provides greater visibility into and control over how companies spend money. Customers – small, medium and large – have used the Coupa platform to bring billions of dollars in cumulative spend under management.

Coupa's management commentary on the results and earnings guidance

​"We delivered a strong second quarter with record revenues of $95 million, up 54% year-over-year, and calculated billings of $108 million, up $57% year-over-year," said Rob Bernshteyn, chairman and chief executive officer at Coupa. "These results demonstrate our continued momentum in delivering measurable and repeatable value to our customers. By extending our leadership standing in Business Spend Management (BSM), we feel well positioned on our path to $1 billion in revenue."
​
Coupa defines calculated billings as the change in deferred revenue on the balance sheet for the period, plus revenue recognized during the period. See the section titled "Non-GAAP Financial Measures" and the reconciliation tables below for important details regarding Coupa's non-GAAP measures. Coupa defines free cash flows as operating cash flows less purchases of property and equipment.

The image below shows the stock price history of cloud service provider Coupa over the last 12 months. And it shows a significant surge in its share price since December 2018 when it was trading at around $63 a share to the current price of $134.40 a share. That is over 100% return for stockholders in just over 9 months. The question is whether the stock has been running hot and is heading for a pull back? 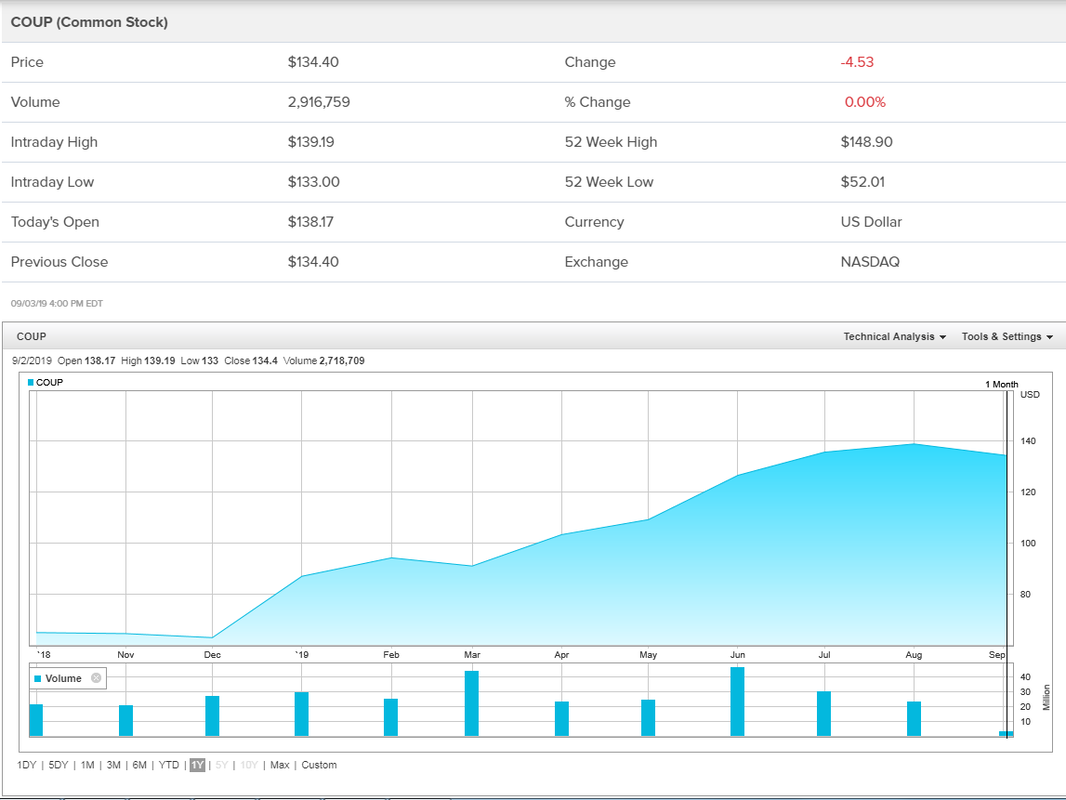 So what are Coupa stock worth after the release of their latest earnings report? While it is extremely difficult to value a stock that makes a loss, or doesn't pay dividends, due to most valuation models requiring dividend payments and or positive earnings per share, we will use their cash generated per share as a proxy for future earnings (and we will assume strong growth in revenues over the next few years as the group pushes for the $1billion revenues). Based on our cash generation per share calculation and their strong revenue expectations we value the group's stock at $116.40 a share. And this is at the top end of our valuation. So our target price of $116.40 per Coupa stock is based on a few very broad and aggressive assumptions and even then the target price is less than their current price. We therefore believe Coupa's stock is overvalued and would expect a pull back from its current price