Dave & Buster's is the leading owner and operator of high-volume venues that combine entertainment and dining in North America for both adults and families. Founded in 1982, the core of the concept is to offer guests the opportunity to “Eat Drink Play Watch®” all in one location. We offer a full menu of "Fun American New Gourmet" entrées and appetizers, a full selection of non-alcoholic and alcoholic beverages, and an extensive assortment of entertainment attractions centered around playing games and watching live sports and other televised events.

Dave & Busters' management commentary on the results and earnings guidance

​“We continue to deliver strong revenue and earnings per share growth – including record second quarter sales, EBITDA and EPS – while investing for the future and returning substantial capital to shareholders through dividends and share repurchases,” said Brian Jenkins, Chief Executive Officer. “We are executing on five near-term priorities to improve performance and capitalize on the growing consumer demand for our offerings. By realizing operational efficiencies and cost savings, we will fund investments to fuel comp sales growth going forward. We are acting decisively to accelerate near and long-term value creation, and to deliver superior returns for all Dave & Buster’s shareholders.”

The Company is focused on five priorities to drive near and long-term value creation:
​Development
The Company remains on track to open 15 to 16 new locations in fiscal 2019, representing unit growth of approximately 12% (net of Gwinnett (Duluth), Georgia closing). At the top end of the range, these store openings will include 11 large and 5 small format locations and will skew towards new markets for the Dave & Buster’s brand.

During the second quarter of 2019, the Company opened three new stores located in Winston-Salem, North Carolina; Natick, Massachusetts (west of Boston); and Gaithersburg, Maryland (northwest of Washington, D.C.). During the third quarter, the Company has already opened a store in Huntsville, Alabama and Concord, California. Two more stores in McDonough, Georgia and Wichita, Kansas are scheduled to open later in the fiscal third quarter. As of September 4, 2019, there were six stores under construction.

Financial Outlook
In light of the competitive environment, and because the initiatives underway will take time to execute and drive results, the Company is setting new guidance for fiscal 2019, which ends February 2, 2020:

The image below, obtained from Google shows the stock price history of Dave & Busters over the last 5 years. And its been a good time for stockholders as the stock was trading at around $17.30, 5 years ago and its currently sitting at $43.72. That's a return of 152% over the last 5 years. However it is not all good news for Dave & Busters stockholders 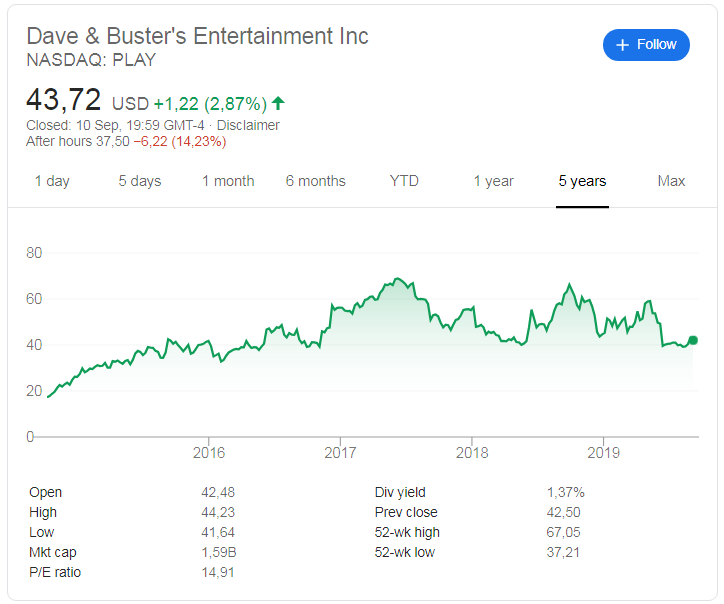 The image below, also obtained from Google shows the stock price performance of Dave & Busters over the last trading day including after market activity on the stock. And as it shows there has been a significantly decline in the stock in after market trading following the release of the group's latest earnings numbers 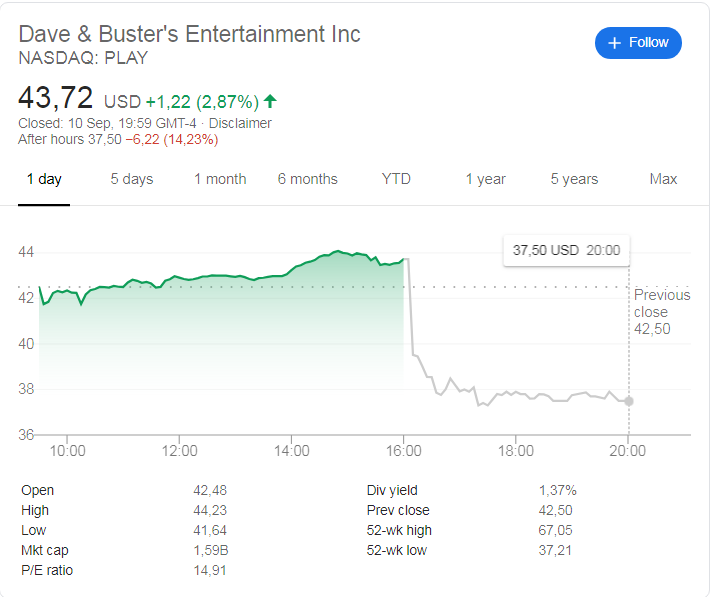 Below an extract of an article covering Dave & Busters obtained from Zacks.

Over the last four quarters, the company has surpassed consensus EPS estimates three times. Dave & Buster's, which belongs to the Zacks Retail - Restaurants industry, posted revenues of $344.60 million for the quarter ended July 2019, missing the Zacks Consensus Estimate by 0.19%. This compares to year-ago revenues of $319.19 million. The company has topped consensus revenue estimates two times over the last four quarters.

The sustainability of the stock's immediate price movement based on the recently-released numbers and future earnings expectations will mostly depend on management's commentary on the earnings call. Dave & Buster's shares have lost about 4.6% since the beginning of the year versus the S&P 500's gain of 18.8%.

The full original article can be found here

So was the market warranted in punishing Dave & Busters in after market trade following the release of their results? Well based on Dave & Busters earnings report and their fiscal guidance provided our valuation models have a target price on Dave & Busters of $43.90. So we believe the price it was trading at before the close of the markets accurately reflected the firms latest financial results and it was actually fully priced around those levels. We therefore believe the reaction in aftermarket trade was a knee jerk reaction to the group lowering their earnings forecast by about $3 million from their previous guidance provided. We expect the stock price of Dave & Busters (NASDAQ:PLAY) to recover to levels closer to our target price of $43.90