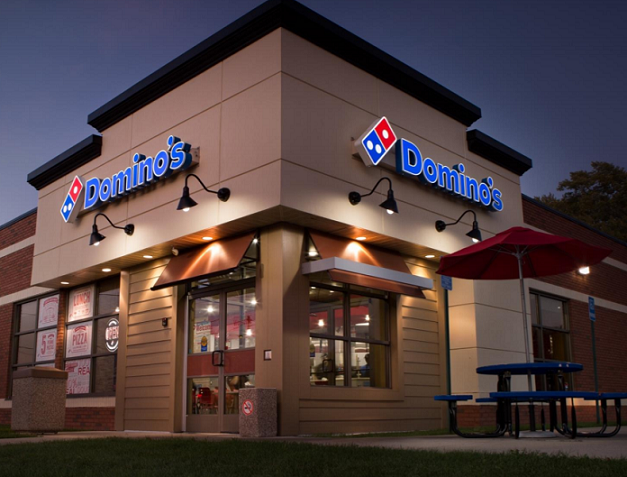 ANN ARBOR, Michigan, July 16, 2019: Domino’s Pizza, Inc. (NYSE: DPZ), the largest pizza company in the world based on global retail sales, announced results for the second quarter, comprised of growth in global retail sales and earnings per share. Global retail sales increased 5.1% in the second quarter, or 8.4% without the negative impact of changes in foreign currency exchange rates. U.S. same store sales grew 3.0% during the quarter versus the prior year quarter, continuing the positive sales momentum in the Company’s U.S. business. The international division also posted positive results, with same store sales growth of 2.4% during the quarter.

​On July 10, 2019, the Company’s Board of Directors declared a $0.65 per share quarterly dividend for shareholders of record as of September 13, 2019 to be paid on September 30, 2019. “It was a good second quarter, particularly for global unit growth, as we continue to seek balanced retail sales growth through the blend of same store sales and store growth,” said Ritch Allison, Domino’s Chief Executive Officer. “As a work-in-progress brand, we are constantly striving to improve in needed areas, execute our long-term strategy and build toward Dominant #1 – a goal I continue to feel we are built to achieve.”

Share Repurchases
During the second quarter of 2019, the Company repurchased and retired 12,295 shares of its common stock under its Board of Directors-approved open market share repurchase program for approximately $3.3 million, or an average price of $269.14 per share. As of June 16, 2019, the end of the second quarter, the Company’s total remaining authorized amount for share repurchases was approximately $147.3 million.

The image below, obtained from Google, shows the stock price history of Domino's Pizza over the last 5 years. And it's been a very good time for Domino's stockholders.5 years ago the stock was trading at around $76.40 a stock and its currently trading at $242.13 a stock. That's a very strong return of 216.9%  provided to Domino's stockholders over the last 5 years. The stock of Domino's is however trading at a lot closer to its 52 week low of $220.90 than it is to its 52 week high of $302.04 which to us is a clear indication that the short term sentiment and momentum of Domino's stock is negative at this point in time. 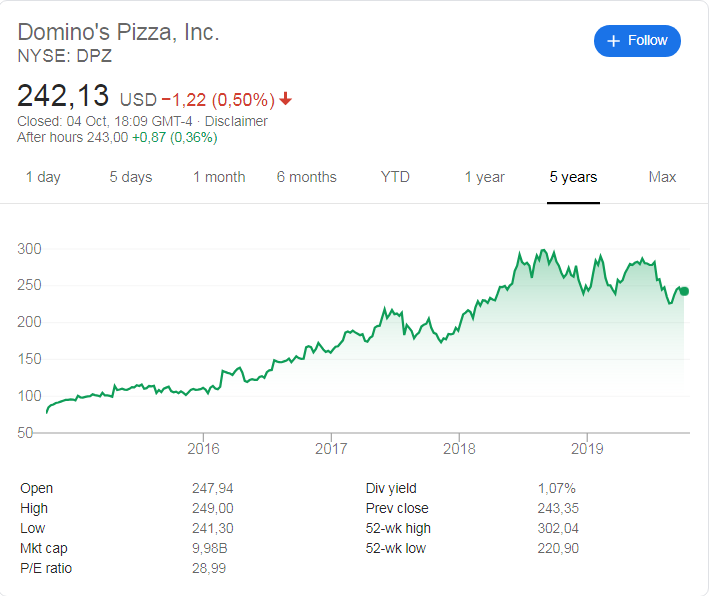 The extract below discusses Domino's upcoming earnings release as obtained from Zacks.

​Wall Street expects a year-over-year increase in earnings on higher revenues when Domino's Pizza (DPZ - Free Report) reports results for the quarter ended September 2019. While this widely-known consensus outlook is important in gauging the company's earnings picture, a powerful factor that could impact its near-term stock price is how the actual results compare to these estimates. The stock might move higher if these key numbers top expectations in the upcoming earnings report, which is expected to be released on October 8. On the other hand, if they miss, the stock may move lower.

While the sustainability of the immediate price change and future earnings expectations will mostly depend on management's discussion of business conditions on the earnings call, it's worth handicapping the probability of a positive EPS surprise.

Zacks Consensus Estimate
This pizza chain is expected to post quarterly earnings of $2.06 per share in its upcoming report, which represents a year-over-year change of +5.6%.

So what is Domino's Pizza (NYSE: DPZ) stock worth based on the release of their latest earnings report? Based on the group's latest earnings and their outlook provided our valuation model provides a target (full value) at $183.40 a stock.  We therefore believe that the stock is overvalued.

We usually suggest long term fundamental or value investors look to enter into a stock at least 10% below our target (full value) price which in this case is $183.40. Thus we see a good entry point into Domino's stock at $165 or below. We believe that Domino's stock will pull back in coming weeks and months to levels closer to our target (full value) price, unless their 3rd quarter earnings release on 8 October 2019 surprises to the upside, if not we cannot see Domino's continuing to trade at its current valuation levels.