Foot Locker, Inc. (NYSE:FL) is a leading global retailer of athletically inspired shoes and apparel.  Headquartered in New York City, the company operates approximately  3,200 athletic retail stores in 27 countries, as well as websites and mobile apps, under the brand names Foot Locker, Champs Sports, Eastbay, Kids Foot Locker, Footaction, Lady Foot Locker, Runners Point, and Sidestep.
​
With its various marketing channels and experiences across North America, Europe, Asia, Australia, and New Zealand, the Company's purpose is to inspire and empower youth culture around the world, by fueling a shared passion for self-expression and creating unrivaled experiences at the heart of the sport and sneaker communities. The image below shows the business highlights for the group. 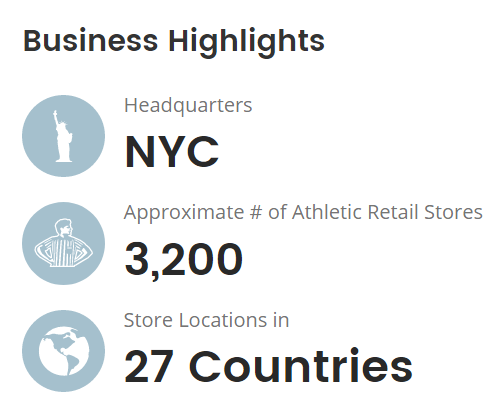 Footlocker management commentary on the results and earnings guidance

NEW YORK, NY, August 23, 2019 – Foot Locker, Inc. (NYSE: FL), the New York-based specialty athletic retailer, reported today financial results for its second quarter ended August 3, 2019. Second Quarter Results Net income for the Company’s second quarter of 2019 was $60 million, or $0.55 per share, compared to net income of $88 million, or $0.75 per share in the corresponding prior-year period. Included in these results are: 1) a $13 million charge related to the lease termination costs incurred in connection with the closure of certain SIX:02 locations, 2) a $1 million charge recorded in connection with the Company’s pension matter, and 3) a $2 million tax charge in connection with U.S. tax reform. Excluding these items, non-GAAP earnings were $0.66 per share and $0.75 per share for the second quarter of 2019 and 2018, respectively.

A reconciliation of GAAP to non-GAAP results is included in the tables below. Second quarter comparable-store sales increased 0.8 percent. Total second quarter sales decreased 0.4 percent, to $1,774 million, compared to sales of $1,782 million for the corresponding prior-year period. Excluding the effect of foreign exchange rate fluctuations, total sales for the second quarter of 2019 increased 0.8 percent. The Company’s gross margin rate decreased to 30.1 percent from 30.2 percent a year ago. SG&A expense rate increased to 22.2 percent from 21.3 percent in the second quarter of 2019, largely reflecting the ongoing investments the Company is making in its digital capabilities and infrastructure. “While our results in the second quarter did come in at the low end of our expectations, we saw improvement in our performance as we moved through each month of the quarter,” said Richard Johnson,

President and Chief Executive Officer. “We remain deeply connected with sneaker and youth culture, and believe this positive momentum exiting the quarter has us well positioned for the back-to-school period and beyond. Further, our team continues to make meaningful progress against our long-term strategic imperatives.”

Financial Position As of August 3, 2019, the Company’s merchandise inventories were $1,227 million, 2.2 percent lower than at the end of the second quarter last year. Using constant currencies, inventory decreased 1.0 percent. The Company’s cash totaled $939 million, while the debt on its balance sheet was $123 million. The Company repurchased 2.9 million shares for $120 million during the quarter and paid a quarterly dividend of $0.38 per share, for a total of $41 million.

"In addition to making meaningful investments in our stores and digital capabilities during the quarter, we maintained our disciplined approach to inventory management and are set-up to continue flowing fresh, exciting product offerings for the back-half of 2019,” said Lauren Peters, Executive Vice President and Chief Financial Officer. “We remain optimistic that we can deliver a mid-single digit comparable sales gain for the full year and high-single digit adjusted EPS growth.” Store Base Update During the second quarter, the Company opened 10 new stores, remodeled or relocated 35 stores, and closed 37 stores. As of August 3, 2019, the Company operated 3,174 stores in 27 countries in North America, Europe, Asia, Australia, and New Zealand. In addition, 123 franchised Foot Locker stores were operating in the Middle East, as well as 10 franchised Runners Point stores in Germany.

The image below shows the stock price history obtained from Yahoo finance of Footlocker (NYSE:FL) for the last 5 years. As the image shows its been a pretty volatile ride for Footlocker shareholders over the last number of years. And while it has been very volatile the underlying trend is downwards, with the shares trading at close to $50 5 years ago and now its trading down at $34 a share. Down almost 19% on Friday 23 August alone. 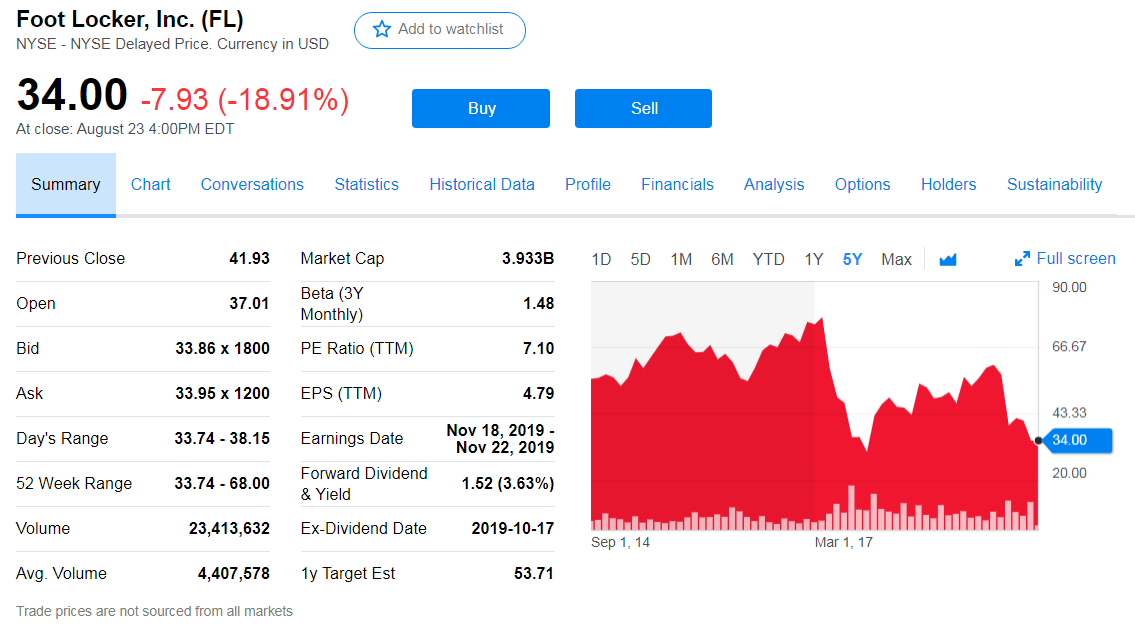 So what are Footlocker shares worth based on their latest financial results, and has the market overreacted in punishing the group's shares by almost 20% after the release of the financial results. Or is their massive share price decline justified. Based on the numbers above (which showed sharp declines in earnings and earnings per share), but a strong balance sheet and well managed inventories and accounts receivable we value the group's stock at $41.70 share. We therefore believe that it is undervalued at its current price. But we would advise against buying the stock now until the price settles down and the market digests their financial results properly. Significant price movements as experienced by the group's shares on Friday has likely triggered a few stop orders and trailing stops which could see additional price declines before price action settles down.

We believe once the price action settles down the group's shares will make its way back towards our valuation price of $41.70