G-III's management commentary on the results and earnings guidance

Morris Goldfarb, G-III’s Chairman and Chief Executive Officer, said, “We are pleased to report second quarter results that met our expectations and were fueled by continued outperformance in our wholesale business enabling us to navigate the ever-changing retail landscape. Our well-developed supply chain has enabled us to significantly expand our sourcing base throughout the world; we still see substantial opportunities for continued diversification. These capabilities, along with long-standing strong vendor relationships, have helped us mitigate some of the tariff headwinds. However, based on the additional tariffs that were just implemented, we feel it is prudent to revise our guidance to a more conservative posture for the remainder of this fiscal year.”

Mr. Goldfarb concluded, “Our formula for success includes having a portfolio of brands that are in demand and deliver high quality, well-designed, competitively priced products that elevate our position as a supplier-of-choice. Through solid execution, we remain poised to drive significant long-term sales and profit growth.”

Outlook
G-III Apparel Group today issued revised guidance for the fiscal year ending January 31, 2020 that incorporates the expected impact of the additional tariffs implemented effective September 1, 2019 and expected to be implemented later this year. Prior guidance issued last quarter incorporated the effect of tariffs in effect at that time.

The image below shows the stock price history of G-III for the last 5 years. And as the image shows its been a pretty sad affair for G-III stockholders. 5 years ago the stock was trading at around $42.50 and its currently trading at $23.84. Thats a decline of 43.9% in G-III's stock price over the last 5 years. Not a good story to tell at all. But the stock reacted sharply to the release of their latest earning release. It shot up by over 26%. See the recent coverage of G-III below. The group is trading at well below its 52 week high of around $50 and is trading close to their 52 week low of $18.18 which indicates to us that the short term sentiment towards the group is still overwhelmingly negative. But has the markets gone to for, and is the current depressed price creating a buying opportunity for fundamental long term or value investors? 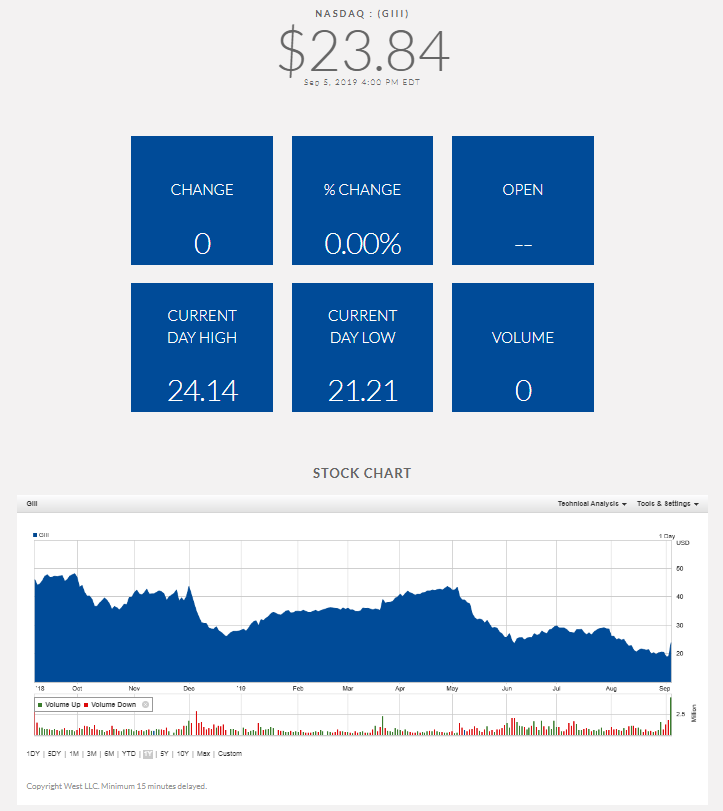 The extract below was obtained from Yahoo Finance in which they briefly covered the results from G-III.

G-III Apparel Group shares soared 26.5% following second-quarter financial results that were better than many had feared. Revenue gains were limited to 3% compared to year-earlier levels, but even a modest gain in adjusted earnings was enough to satisfy investors. G-III's wholesale segment did especially well, posting sales growth of greater than 8%. The company also boosted its revenue projections for the full year, although it cut its expectations for adjusted earnings. G-III still has a long way to go to make up for its share-price declines from earlier in the year, but today's news is a step in the right direction for the apparel company.

So based on G-III latest earnings release and their outlook provided what do we value G-III stock at? Is the stock undervalued and was the surge in the stock price after the release of their earnings justified? Based on our valuation models we have a target price (full value price) on the stock of G-III at $47.69 which is relatively close to their 52 week high. We believe the stock of G-III is undervalued and offers long term fundamental investors a great entry point into the stock, and we expect the stock to trend upwards in coming weeks and months to see the stock price closer to our target (full value) price