Great Elm Capital Corp. is an externally managed, specialty finance company focused on investing in debt instruments of middle market companies. GECC elected to be regulated as a business development company under the Investment Company Act of 1940, as amended. GECC targets special situations and catalyst-driven investments as it seeks to generate attractive, risk-adjusted returns through both current income and capital appreciation.

The image below shows a breakdown of Great Elm's investment portfolio as at June 2019. The group is heavily invested in Wireless Telecommunications. 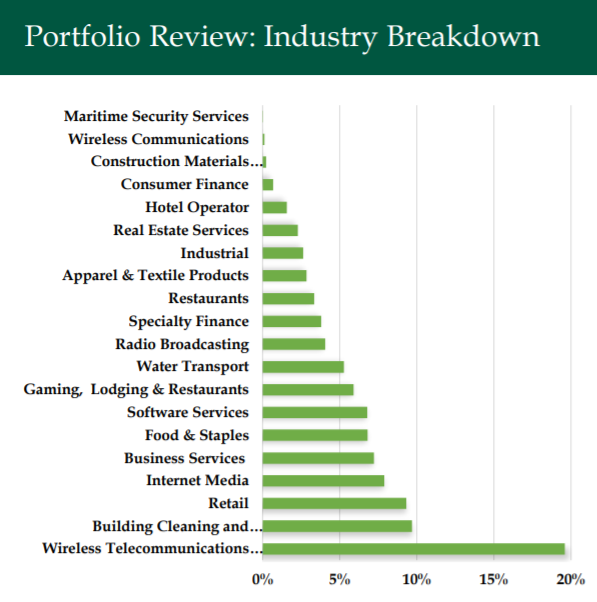 WALTHAM, Mass., Aug. 13, 2019 (GLOBE NEWSWIRE) -- Great Elm Capital Corp. (“we,” “us,” “our” or “GECC”), (NASDAQ: GECC), today announced its financial results for the quarter ended June 30, 2019. “I’m pleased to report that NII covered our base distribution by such a wide margin this quarter,” remarked Peter A. Reed, GECC’s Chief Executive Officer. “Our team continues to be encouraged by the portfolio’s performance, outlook and increasing diversity.”

During the quarter ended June 30, 2019, we deployed approximately $61.7 million into 15 investments (which included investments in three new companies and 10 existing portfolio companies). The weighted average price of the debt deployment activity was 98% of par, carrying a weighted average current yield of 10.9%.

During the quarter ended June 30, 2019, we monetized, in part or in full, 16 investments for approximately $36.6 million, at a weighted average current yield of 10.8%. Our weighted average realized price was par.

The image below, obtained from Google, shows the stock price history of Great Elm Capital since its listing in November 2016. its not been a good time for Great Elm stockholders since the group's listing. When they listed they traded at around $12 a stock and its currently trading at $8.48. Thats a negative return of -29% since the group's listing. Interestingly Great Elm Capital is trading at close to the midpoint between its 52 week low and its 52 week high which to us is an indication that the short term sentiment and momentum of the stock is neutral. 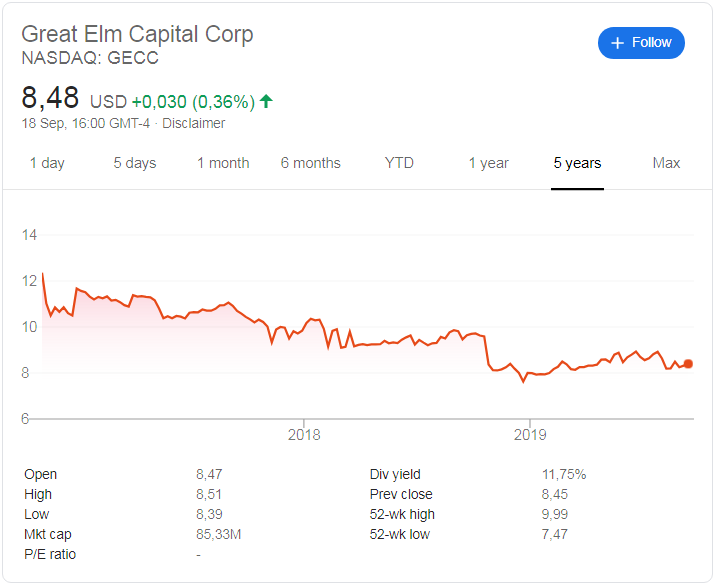 Based on this valuation and its current trading price we believe the group is fully valued at its current price. We would suggest that long term fundamental investors and value investors look to enter Great Elm Capital at least 10% below the trading range mentioned earlier. A good entry point would therefore be between $7.87 and $8.34