​​Harley-Davidson manufactures and sell custom, cruiser and touring motorcycles that feature leading-edge styling, innovative design, distinctive sound, and superior quality with the ability to personalize. We also provide:
​Harley-Davidson Financial Services offers a complete line of financing options and insurance products and services to help get and keep customers on the road. HDFS offers to dealers and customers:

The numbers we are interested in (for the quarter):
In the latest quarter motorcycles made up 79.8% of Harley-Davidson's revenue, parts and accessories made up 15.6% and general merchandise 4.6%.

Harley-Davidson's management commentary on the results and earnings guidance

MILWAUKEE, July 23, 2019 /PRNewswire/ -- Harley-Davidson, Inc. (NYSE:HOG) today reported second quarter 2019 results. The company made progress towards its plan to build more riders through its More Roads to Harley-Davidson accelerated plan for growth and expects to substantially mitigate incremental EU and China tariffs early in the second quarter of 2020.

"In the second quarter we achieved significant advancements under our More Roads plan and we continued to lay a solid foundation for future growth," said Matt Levatich, president and chief executive officer, Harley-Davidson, Inc. "The decisions and investments we're making, within a highly dynamic and competitive global marketplace, demonstrate our intense focus to build the next generation of riders and maximize shareholder value."

Strategy to Build the Next Generation of Riders
Building riders
Harley-Davidson continues to inspire diverse, new riders around the globe. Harley-Davidson ridership in the U.S. has been up each year since 2001 and was at an all-time high of over 3 million riders in 2018. The company increased its reach and impact in the second quarter and delivered the following:
More Roads to Harley-Davidson accelerated plan for growth
Harley-Davidson's strategic objectives through 2027 are to: build 2 million new riders in the U.S., grow international business to 50 percent of annual volume, launch 100 new high impact motorcycles and do so profitably and sustainably.
The More Roads to Harley-Davidson accelerated plan for growth drives the company's strategy to deliver sustainable growth and build the next generation of riders by delivering exciting products in existing and new spaces, broader access to Harley-Davidson and an optimized customer experience through an even stronger dealer network. The company plans to maintain its investment and return profile and capital allocation strategy, while it funds strategic opportunities expected to drive revenue growth and expand operating margin through 2022.

During the second quarter, Harley-Davidson made further progress on its More Roads plan, most notably announcing a collaboration that joins Harley-Davidson's global motorcycle leadership with the capabilities of Qianjiang Motorcycle Company Limited to launch a smaller, more accessible Harley-Davidson motorcycle planned for China in 2020 with additional Asian markets to follow. This move is intended to expand access to the Harley-Davidson brand to more riders in Asia. During the second quarter, the company's efforts to increase access in emerging Asian markets, including through its Thailand manufacturing strategy, drove sales increases of 77 percent in its ASEAN (Association of Southeast Asian Nations) markets.

"There are more riders on Harleys in the U.S. than at any point in our history, and the number of young riders continues to grow.  The strength of the Harley-Davidson brand, and bare knuckle grit of this company and our global dealers, will continue to be leveraged and sharpened to make riding matter to more people," said Levatich.

2019 Outlook
Harley-Davidson recently obtained regulatory approvals confirming that motorcycles shipped from the company's Thailand operations to the EU would receive more favorable tariff treatment than if they were shipped from the U.S. However, the approval process took considerably longer than the company had planned.

As a result of the timing of these approvals and softer than expected European retail sales as key drivers, the company has adjusted its 2019 outlook and now expects:
​For the full-year 2019, the company continues to expect: 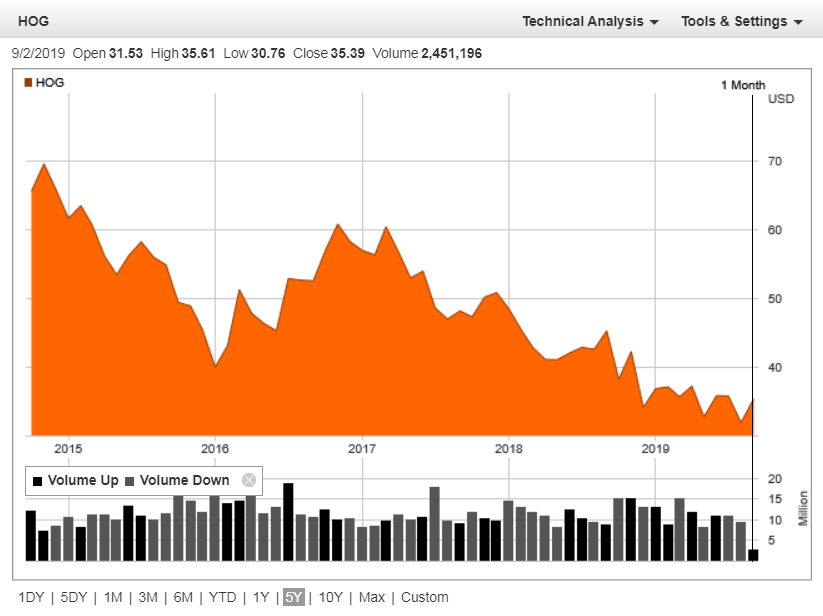 The extract below touches on the latest regarding Harley-Davidson, as obtained from Zacks.

​In sync with long-term growth objectives to expand product portfolio and customer base, Harley-Davidson, Inc. (HOG - Free Report) recently unveiled the details of its new motorcycle models and technologies for 2020. The Milwaukee-based company is planning to release new products that better align with market trends and the tastes of younger generations.

A Closer Look at the New Lineup
Some of the new models to watch out for in 2020 include LiveWire, Low Rider S and CVO Tri Glide.
In a bid to establish itself as the leader in the electrification of motorcycles, Harley-Davidson will be launching the high-tech LiveWire, which will be its first attempt in electric two-wheelers. The e-bike, infused with new level of technology, is expected to have a range of up to 146 miles per charge and is geared toward a new generation of riders.

Harley-Davidson can certainly benefit from early market entry into the world of electric bikes. It will be able to leverage its already existing network, as the current electric motorcycle brands are mainly startups that lack solid distribution and ability to scale. The company doesn’t want to make the same mistake that long-standing U.S. car manufacturers such as Ford (F - Free Report) and General Motors (GM - Free Report) made by allowing newcomer Tesla (TSLA - Free Report) to capitalize on the electric car market.

The Low Rider S,powered by the Milwaukee-Eight 114 engine, emphasizes on power and performance. Following a two-year hiatus, the updated model has better handling and rider control, while still being rooted in the legacy of the earlier Low Rider models. The new CVO Tri Glide model, loaded with premium features, will be the latest addition to the firm’s line of CVO models. The three-wheeled bike, powered by Milwaukee-Eight 117 powertrain, will come with advanced technologies, exclusive components and show-stopping finishes, upholding the standards of CVO models.

On the tech front, Harley-Davidson will be equipped with the H-D Connect cellular connectivity service and Reflex Defensive Rider Systems (RDRS) technologies. Available for select Harley-Davidson motorcycles, the H-D Connect cellular connectivity service will allow riders to connect them to their bikes through the Harley-Davidson App. It will keep the riders updated about key vehicle health information, and bike status and security. The RDRS technology for select models will feature traction control and advanced antilock braking system.

In Sync With Its Growth Plan
The new product launches will be in sync with its “More Roads to Harley-Davidson” growth plan, which was unveiled last year. The strategy, which extends to 2022, is aimed at helping the motorcycle company to reach its 2027 objectives such as encouraging 2 million new riders in the United States, achieving growth without increasing environmental impact and boosting the international business.The growth plan emphasizes on launching lighter motorcycles and bolstering dealer networks.
​
By 2027, the company aims at launching 100 new motorcycles. Beginning from 2020, it plans to launch motorcycles under middleweight (500cc to 1250cc) and lightweight (250cc to 500cc) categories, in addition to the existing heavyweight category.

So based on Harley-Davidson's latest earnings report and their outlook what do we value Harley-Davidson stock at? Considering their latest earnings report and the outlook provided we have a target price of $61 a stock. So we believe the group is extremely undervalued at its current price and it offers long term fundamental and value investors a great opportunity to buy into one of the most famous brands in the world.