The holiday shopping season comes along every fall with increased business activity. To accommodate holiday shoppers, employers in retail trade often hire seasonal workers from October to December. The industry cannot sustain the expanded workforce, and, for this reason, layoffs follow from January to February. This Beyond the Numbers article examines seasonal employment buildups and layoffs in several retail trade industries based on data from the Current Employment Statistics (CES) survey. These changes can be used to analyze seasonally adjusted data. Seasonal adjustment removes predictable seasonal patterns in data (for example, hiring for the holiday season), allowing users to analyze the underlying trend without the influence of typical seasonal hiring and layoffs.

​Supermarkets and grocery stores transformed in the 20th century from small mom-and-pop operations to large-format centers of convenience.1 One of the most important modern technological advances that enabled this transformation was the cash register, invented in 1878.2 Innovations both internal and external to supermarket operations influenced future format changes.
An employment buildup table (using not seasonally adjusted data) provides an account of an industry’s net employment growth during a particular holiday season. This table allows meaningful analyses of underlying trends and provides comparisons with previous holiday seasons. Table 1 shows seasonal employment buildups in retail trade from 2010 to 2018. The level of employment in September serves as a base for comparisons of seasonal hiring. Over-the-month employment changes (from October to December) largely account for seasonal hiring, and percentage changes facilitate comparisons with buildups in prior years.

The magnitude of employment buildup for any specific month during the hiring season is partially a function of timing between surveys. The CES reference period is the pay period that includes the 12th of the month. Either 4 or 5 weeks occur between the weeks of the 12th in any given pair of months. The presence of an extra week usually results in stronger seasonal hiring than a 4-week period, as employers have an additional week to hire seasonal workers. As a result, hiring is weaker the month after a 5-week interval. In retail trade, the presence of a 5-week interval between October and November resulted in a much stronger employment buildup in November 2012, 2013, 2017, and 2018, when employment gains represented 5.1 percent or more of base employment. In comparison, the 4-week seasonal gains in November represented 4.7 percent or less of base employment.

​Although hiring varies with timing differences during the buildup period, considering the entire buildup season provides an overview of the underlying employment trend. Total seasonal hiring had trended up each year from 2010 until peaking in 2013, at 9.3 percent of base employment. Every year since that time, the buildup has decelerated, whereby employment buildup from each holiday season is less than the prior year. Over the 2018 holiday buildup period, employment in retail trade increased by 583,000, which accounted for a 7.0-percent share of base employment. In fact, employment in retail trade showed little net change after seasonal adjustment (-22,000) during the holiday shopping season.​ 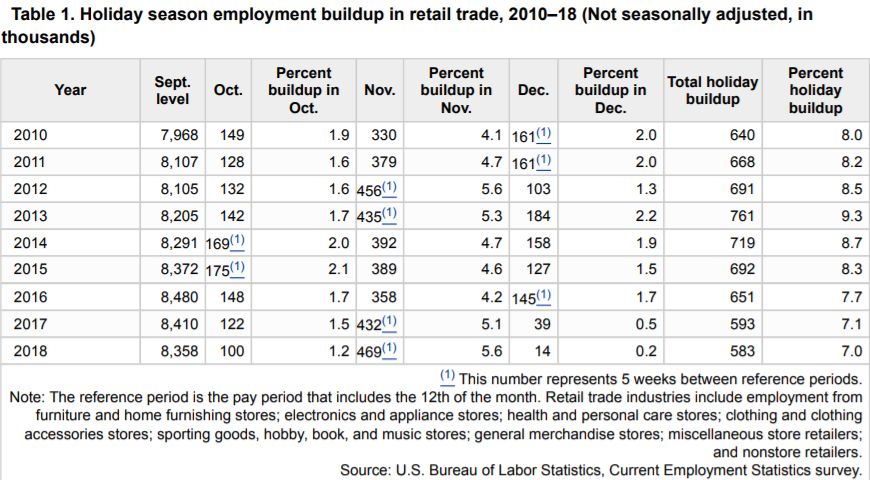 After the holiday shopping season, employment in retail trade tends to decline. A layoff table measures seasonal employment declines after the holiday shopping season. (See table 2.) This table facilitates the analysis of a series’ underlying trend and allows comparisons with past layoff periods. It depicts seasonal employment layoffs from 2011 to 2019. The table consists of base employment levels for each September, total buildup data, overthe-month changes for the layoff period, as well as buildup and layoff percentage changes. Strong layoffs occur in January, succeeded by additional layoffs in February. The presence of a 5-week period between December and January provides an additional week to lay off more seasonal workers in January. For example, layoffs represented 6.2 percent or more of base employment in January 2014, 2015, and 2016—all 5- week intervals. When 4 weeks occurred between December and January, seasonal declines accounted for 6.0 percent or less, except in 2013 when layoffs amounted to 6.5 percent of base employment. Due to the stronger employment declines in January, layoffs in February are usually smaller, and the presence of a 5th week between surveys does not appear to affect the magnitude of layoffs. Total seasonal employment layoffs accelerated each year from 2011, and ultimately peaked in 2014 at 9.8 percent of base employment. Every year through 2018, layoffs trended down. In 2019, retail trade laid off 683,000 seasonal workers, which made up 8.2 percent of base employment. After seasonal adjustment, employment in retail trade showed little net change during the layoff period (-25,000).​ 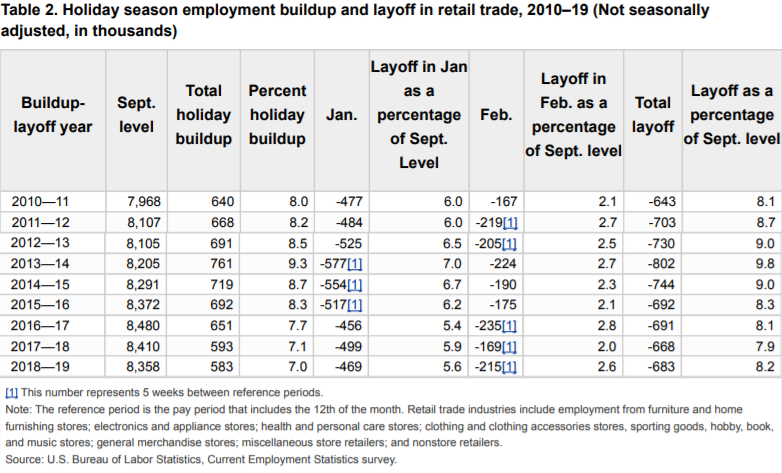 Net effects of buildup and layoff

Typically, the number of seasonal employment layoffs in retail trade has been slightly more than seasonal hiring during the buildup period. (See chart 1.) However, stronger layoffs occurred during the 2017–18 and 2018–19 buildup–layoff periods 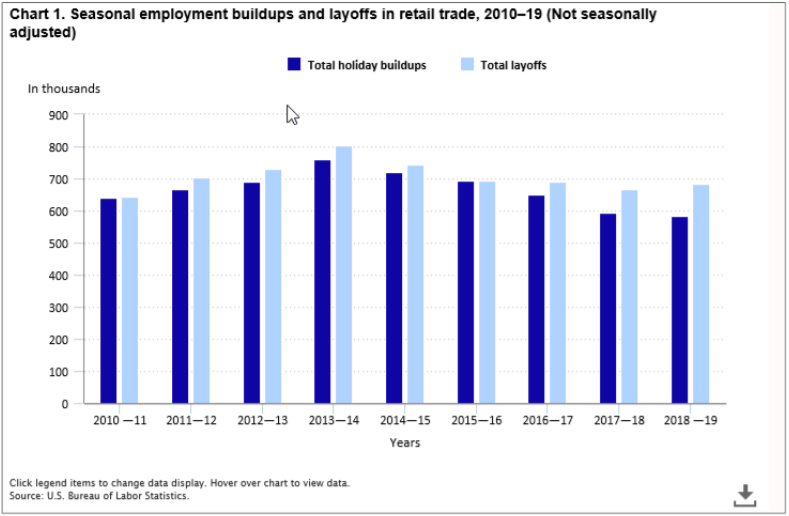