About Jack in the Box

Jack in the Box Inc. (NASDAQ: JACK), based in San Diego, is a restaurant company that operates and franchises Jack in the Box® restaurants, one of the nation’s largest hamburger chains, with more than 2,200 restaurants in 21 states and Guam. 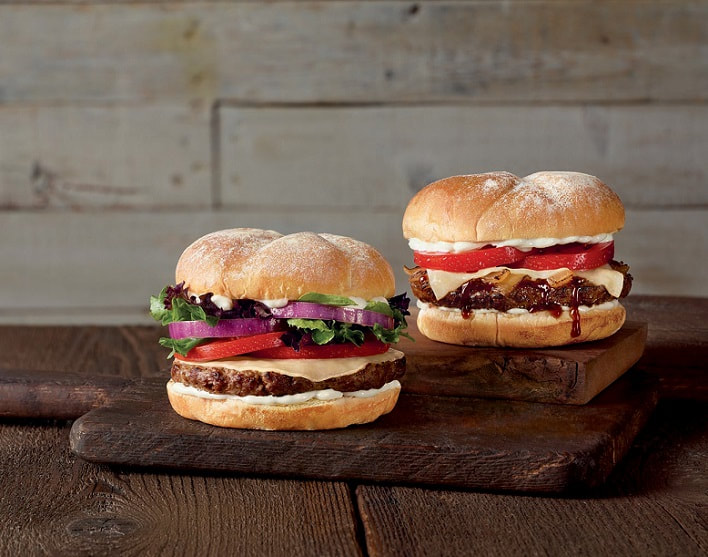 Ribeye steak burgers from Jack in the Box

Overview of Jack in the Box's 3rd quarter 2019 earnings report

Jack in the Box® system same-store sales increased 2.7 percent for the quarter. Company same-store sales increased 2.8 percent in the third quarter driven by average check growth as transactions improved to flat for the quarter. Lenny Comma, chairman and chief executive officer, said, "Our greater emphasis on bundled value in the third quarter resulted in a substantial improvement in both traffic and sales trends while also driving check and maintaining strong restaurant margins. Our guests have responded favorably to the breadth of our promotions, which leverage our strategy around compelling value bundles, including both new product innovation as well as guest favorites, without devaluing our core menu items. This momentum has accelerated thus far into our fourth quarter.

"With our recent refinancing completed, we've achieved our target leverage ratio of approximately 5.0 times EBITDA. We remain firmly committed to returning cash to shareholders and now have $301 million available for share repurchases. "Our long-term goals continue to center around meeting evolving consumer needs, with emphasis on improving operations consistency and targeted investments designed to maximize our returns. We remain focused on balancing the interests of all our stakeholders, including our franchisees, customers, employees and shareholders."
Capital Allocation
The company did not repurchase any shares of its common stock in the third quarter of fiscal 2019. The company has approximately $101.0 million remaining under share repurchase programs authorized by its Board of Directors that expire in November 2019. On August 2, 2019, the company's Board of Directors authorized an additional $200.0 million share repurchase program that expires in November 2020. The company also announced today that on August 2, 2019, its Board of Directors declared a cash dividend of $0.40 per share on the company's common stock. The dividend is payable on September 10, 2019, to shareholders of record at the close of business on August 19, 2019.

Guidance
This release includes forward-looking guidance for certain non-GAAP financial measures, including Restaurant-Level Margin and Adjusted EBITDA. The company is unable without unreasonable effort to provide reconciliations of these forward-looking non-GAAP measures.

Fiscal Year 2019 Guidance
The following guidance and underlying assumptions reflect the company’s current expectations for the fiscal year ending September 29, 2019. Fiscal 2019 and fiscal 2018 are 52-week years, with 16 weeks in the first quarter, and 12 weeks in each of the second, third and fourth quarters.
Updated from prior guidance: Consistent with prior guidance: 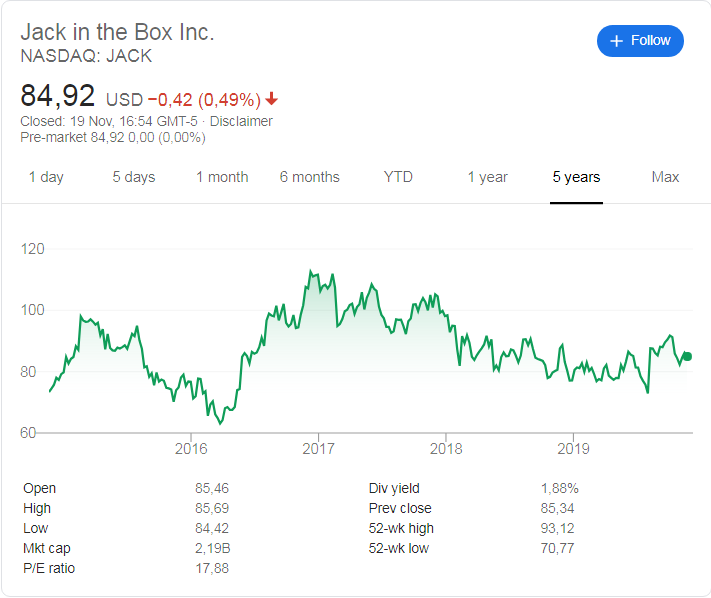 Recent coverage of Jack in the Box

The extract below covers the latest regarding Jack in the Box as obtained from TheStreet.com. Analysts are favouring the stock due to their strong stock repurchase program.

​A study of analyst recommendations at the major brokerages shows that Jack in the Box, Inc. (JACK - Get Report) is the #26 broker analyst pick among those stocks screened by The Online Investor for strong stock buyback activity. To make that list, a stock must have repurchased at least 5% of its outstanding shares over the trailing twelve month period. In forming the rank, the analyst opinions from the major brokerage houses were tallied, and averaged; then, the list of stocks with strong buyback activity was ranked according to those averages.

Investors are often keenly interested in knowing which companies are buying back their own stock, because companies often will only make such a move if they feel their stock is undervalued. Jack in the Box, Inc. is a company with strong buyback activity that is also considered a compelling buy by analysts; a bullish investor could take this to mean that sharp analyst minds came to the same bullish conclusion as the company itself that the stock is a good value, and therefore the stock should do well in the future. 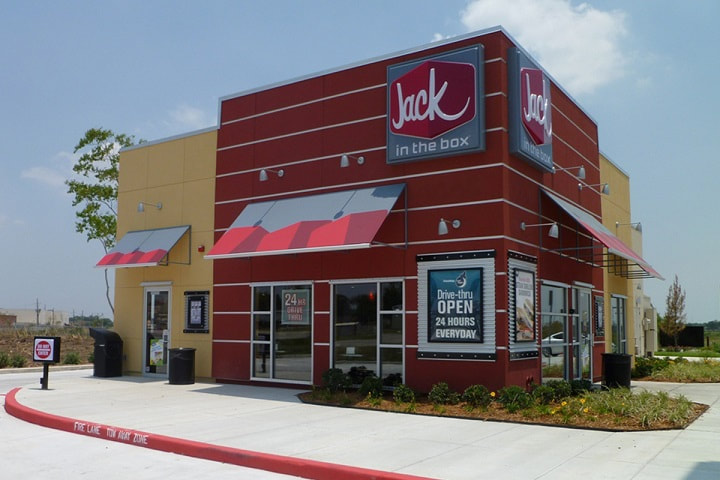 Jack in the Box store

​We usually recommend long term fundamental or value investors look to enter a stock at least 10% below our target (full value) price, which in this case is $74.20, thus a good entry point into Jack in the Box would be at $66.80 or below.