Kontoor Brands, Inc. (NYSE: KTB) is a global lifestyle apparel company, with a portfolio led by two of the world’s most iconic consumer brands: Wrangler® and Lee®. Kontoor designs, manufactures and distributes superior high-quality products that look good and fit right, giving people around the world the freedom and confidence to express themselves. Kontoor Brands is a purpose-led organization focused on leveraging its global platform, strategic sourcing model and best-in-class supply chain to drive brand growth and deliver long-term value for its stakeholders 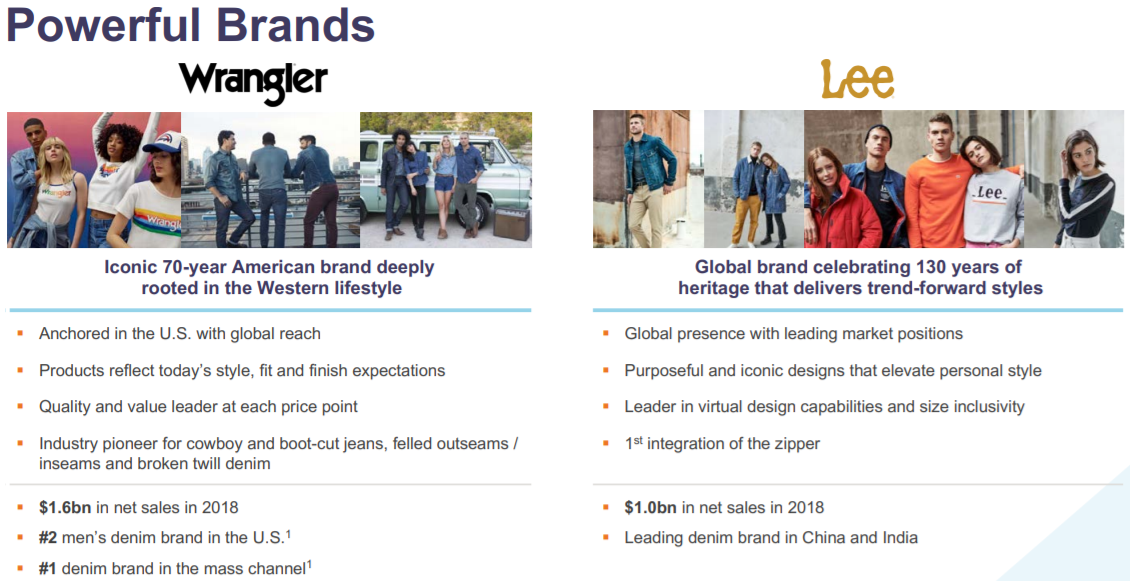 Kontoor Brand's management commentary on the results and earnings guidance

​GREENSBORO, N.C. - Aug. 8, 2019 - Kontoor Brands, Inc. (NYSE: KTB), a global lifestyle apparel company, with a portfolio led by two of the world’s most iconic consumer brands, Wrangler® and Lee®, today reported financial results for its second quarter ended June 29, 2019. Kontoor became an independent, publicly traded company on May 23, 2019. “The restructuring and cost savings actions we’ve taken to simplify and stabilize the organization are paying off and are setting the foundation for improved profitability in the second half of 2019 and beyond,” said Scott Baxter, President and Chief Executive Officer, Kontoor Brands. “We will remain disciplined in our approach and focused on our total shareholder return goal of 8 to 10 percent supported by an industry leading dividend.”

Wrangler® brand global revenue decreased 8 percent to $364 million on a reported basis, down 7 percent in constant currency, largely driven by international performance. U.S. revenue declined 3 percent due to timing shifts of shipments and the customer bankruptcy. Adjusted global revenues declined 8 percent. Excluding currency and the impact of the customer bankruptcy, Wrangler® adjusted revenue would have been down 6 percent in the quarter. Of note, excluding the bankruptcy, Wrangler’s U.S wholesale performance was up 2 percent in the first half of 2019, and we anticipate global sales to accelerate in the second half of this year.

Lee® brand global revenue decreased 5 percent to $207 million on a reported basis, down 3 percent in constant currency. Adjusted global revenues declined 5 percent. Excluding currency and the impact of the customer bankruptcy, Lee® adjusted revenue would have increased 1 percent in the quarter.
​
Full Year 2019 Outlook Reaffirmed
“We have the pieces in place and see a clear path to achieving our long-term revenue growth, margin improvement, and cash generation goals,” said Baxter. “These improvements start to gain traction in the second half of 2019 as our business model changes and cost improvement initiatives begin to take hold.”

• Adjusted EBITDA is expected to range between $340 million and $360 million, reflecting a midsingle digit to low double-digit decline compared with full year 2018 adjusted EBITDA. As anticipated, the impacts of strategic actions and the prior year U.S. retailer bankruptcy weighed on our second quarter performance. We expect to see improved second half performance as benefits from restructuring and cost savings initiatives begin to more fully manifest. As planned, inventory levels are expected to remain elevated during the third quarter of the year due to the inventory built during the second quarter in anticipation of plants closed. The company expects second half adjusted EBITDA to be more weighted to the fourth quarter.

​• Other full year assumptions include an effective tax rate of approximately 24 percent. Interest expense should be approximately $40 million in 2019, or $60 million on an annualized basis.

The image below, obtained from Google, shows the stock price history of Kontoor (NYSE: KTB) since its listing in May 2019. And its not been a very good day for Kontoor investors since the group's listing. At listing it was trading at close to $40.50 and its currently trading at $34.59. A loss for stockholders of -14.59% since listing. The group is trading at close to the mid point between its 52 week low and 52 week high, which shows short term momentum and sentiment towards the stock at this point in time is neutral. 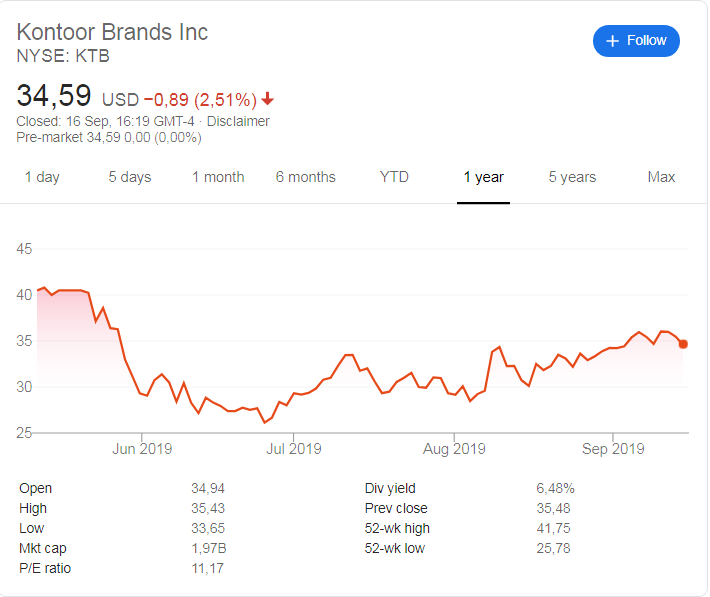 The extract below touches on Kontoor, the article was obtained from Zacks

So based on the earnings report of Kontoor Brands (NYSE: KTB) and what do we value Kontoor Brands (KTB) stock at? Based on the earnings reported and the fiscal guidance provided by the group our valuation model provides a target (full value) price for Kontoor Brands at $32.90 a stock. We therefore believe the stock is overvalued at its current price and we would not recommend long term fundamental or value investors invest into the stock at its current price, but rather look to enter the stock at least 10% below our target (full value) price of $32.90. Therefore a good entry point into Kontoor Brands would be at $29.60 or below.