Kraton Corporation (NYSE: KRA) is a leading global producer of styrenic block copolymers, specialty polymers and high-value performance products derived from pine wood pulping co-products. Kraton’s polymers are used in a wide range of applications, including adhesives, coatings, consumer and personal care products, sealants and lubricants, and medical, packaging, automotive, paving and roofing applications. As the largest global provider in the pine chemicals industry, the company’s pine-based specialty products are sold into adhesive, road and construction and tire markets, and it produces and sells a broad range of performance chemicals into markets that include fuel additives, oilfield chemicals, coatings, metalworking fluids and lubricants, inks and mining. Kraton offers its products to a diverse customer base in numerous countries worldwide.

"Despite opening our third quarter in July with stable market indications, fundamentals including demand in China and broader Asia, and more recently in Europe and North America, weakened notably as the third quarter of 2019 progressed. This adversely impacted results for both our Polymer and Chemical segments," said Kevin M. Fogarty, Kraton's President and Chief Executive Officer.

Continued deterioration in market demand in China and Asia associated with ongoing trade tensions and the impact of tariffs, as well as weakening demand in Europe, particularly for automotive and compounding applications, impacted sales of HSBC product grades for the Company's Polymer segment during the third quarter of 2019. In addition, results for the Polymer segment were affected by soft paving and roofing demand, reflecting elevated customer inventories following a weak second quarter 2019 and ample supply availability from market participants, which contributed to intensified competitive market conditions.

During the third quarter of 2019, the Chemical segment was adversely impacted by an accelerated decline in pricing for certain upgraded products in its Crude Sulfate Turpentine chain, in conjunction with the decline in global gum turpentine pricing, which fell by over forty percent during the quarter. The Company also saw weaker demand and pricing in rosin end markets such as adhesives and road marking. This was related to increased softness in gum rosin pricing, which declined by over twenty percent in the third quarter of 2019.

Given the impact of the foregoing market factors, the Company expects third quarter 2019 Adjusted EBITDA to be approximately $80 million, and based upon its expectation that market conditions will not improve for the balance of the year, the Company now expects full year 2019 Adjusted EBITDA to be 10-15% below the lower end of its previous guidance range of $370 to $390 million.
​
"In response to what is now a more broad-based global economic slowdown, which we feel is unlikely to reverse course for the balance of 2019, we have taken proactive measures on cost management, cash flow optimization and capital allocation. Despite the weaker than expected operating results in the third quarter of 2019, consolidated net debt decreased by approximately $81 million, or $52 million excluding the effect of foreign currency. This reduction is indicative of the strong cash flow generation profile of our business. With regard to the strategic review of our CariflexTM business, the process is still ongoing, and we are targeting completion of the review process within the next few weeks," added Fogarty.

Worrying for Kraton Corporation stockholders is the fact that the stock lost a third of its value on the day, declining by -$9.65 or 32.09% after the release of the preliminary earnings report. 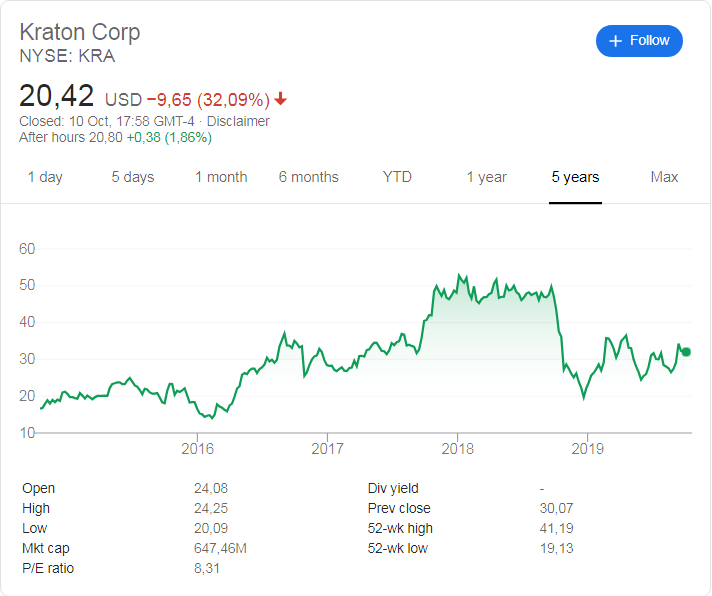 The extract below discusses the latest preliminary earnings of Kraton as obtained from Thestreet,com

Shares of chemical company Kraton (KRA - Get Report)  lost nearly a third of their market value Thursday after it said third-quarter earnings won't meet expectations.  Weak global demand is damping Kraton's business.  "Despite opening our third quarter in July with stable market indications, fundamentals including demand in China and broader Asia, and more recently in Europe and North America, weakened notably" as the period went on, CEO Kevin Fogarty said in a statement. The change hurt results for its polymer and chemical segments, he said.

Declining demand in China and the rest of Asia stems largely from U.S.-China trade tension and tariffs. In Europe, which is suffering a sharp economic slowdown, weak demand for automotive and compounding applications dented sales, Kraton said. The shares closed down 32% at $20.33. The day's low was $20.09. The 52-week low, set last December, was $19.13.