About The Kroger Company

With nearly 2,800 stores in 35 states under two dozen banners and annual sales of more than $121.1 billion, Kroger today ranks as one of the world’s largest retailers.

​Mergers have played a key role in Kroger’s growth over the years. In 1983, 100 years after the company’s founding, Kroger merged with Dillon Companies Inc. in Kansas to become a coast-to-coast operator of food, drug and convenience stores.

The biggest merger in Kroger’s history came in 1999, when the company teamed up with Fred Meyer, Inc. in a $13 billion deal that created a supermarket chain with the broadest geographic coverage and widest variety of formats in the food retailing industry. The merger also enabled Kroger to generate huge economies of scale in purchasing, manufacturing, information systems and logistics. In an era when many larger mergers failed, the success of the Kroger-Fred Meyer merger stands out.

In 2014, Kroger finalized its merger with Harris Teeter, a regional chain of more than 200 stores. This merger brought to Kroger an exceptional brand and complementary base of stores in high-growth markets, primarily in the Mid-Atlantic region and the District of Columbia. Later that year, Kroger merged with Vitacost.com, one of the largest pure e-commerce companies in the nutrition and healthy living market. The company’s e-commerce platform accelerated Kroger’s entry into the e-commerce space by several years, bringing the ability to serve customers through ship-to-home orders, and expanding Kroger’s reach into all 50 states and internationally. Then in late 2015, Kroger merged with Roundy’s in Wisconsin, adding Pick ‘N Save, Metro Market and Mariano’s stores in Wisconsin and Illinois to the Kroger family.
​
Today Kroger offers a store format for nearly every kind of shopper. Our formats include supermarkets, multi-department stores, Marketplace stores, price-impact stores, and fine jewelry stores. 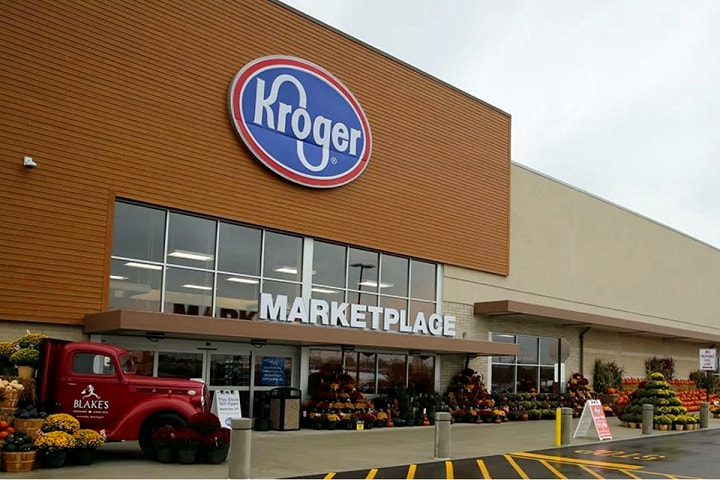 Kroger's management commentary on the results and earnings guidance

​"Kroger's customer obsession and focus on operational excellence continued to generate positive results in the third quarter. Identical sales were the strongest since we started Restock Kroger and gross margin rate, excluding fuel and pharmacy, improved slightly in the quarter. At the same time, we continued to reduce costs as a percentage of sales.

We are using the power of Kroger's stable and growing supermarket business to create meaningful incremental operating profit through the alternative profit stream businesses, which adds up to a business built for long-term growth that generates consistently attractive total shareholder returns. Kroger continues to generate strong and durable free cash flow as reflected by the fact that the company has reduced debt by $1.5 billion over the prior four quarters and continues to increase its dividend to create shareholder value. Restock Kroger is the right framework to reposition our business to create value for all of our stakeholders, both today and in the future."
Capital Allocation Strategy
Kroger's financial strategy is to use its free cash flow to drive growth while also maintaining its current investment grade debt rating and returning capital to shareholders. The company actively balances the use of its cash flow to achieve these goals.

Consistent with its financial strategy, Kroger reduced net total debt by $1.5 billion over the last four quarters. Kroger's net total debt to adjusted EBITDA ratio is 2.50, compared to 2.72 a year ago (see Table 5). The company's net total debt to adjusted EBITDA ratio target range is 2.30 to 2.50. As a result of being within its targeted debt range, Kroger plans to initiate share repurchases in the fourth quarter under its $1 billion board authorization. Earlier this year, Kroger increased the dividend by 14 percent, marking the 13th consecutive year of dividend increases.

The image below shows the fiscal guidance for the rest of Kroger's 2019 fiscal year as well as their expectation for their 2020 fiscal year. 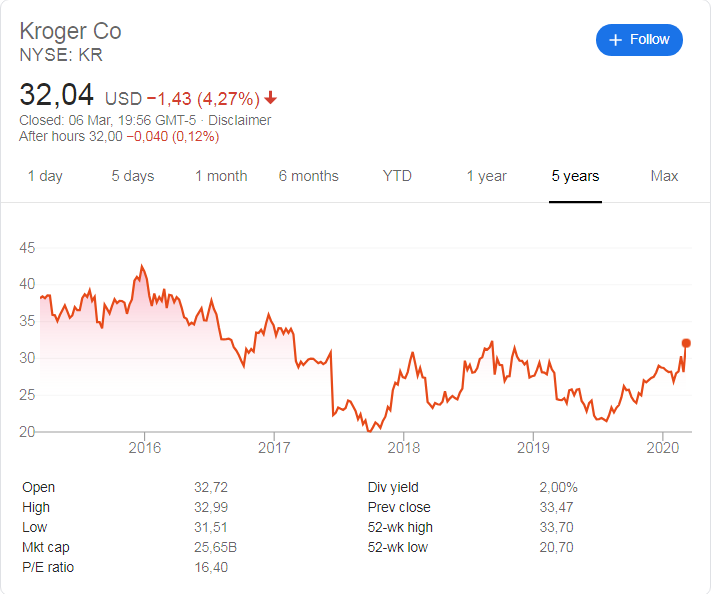 Recent coverage of The Kroger Company

The extract below touches on the latest news regarding Kroger Company as obtained from TheStreet.com

​Investors bulked up on Kroger (KR) - Get Report after the supermarket giant boosted its 2020 earnings forecast above the projections of industry analysts. Kroger's stock at last check jumped 11% as Kroger said Tuesday that earnings for next year will range from $2.30 to $2.40 a share, above current analyst estimates of $2.19 a share.

The Cincinnati chain is also expecting same-store sales to rise next year as well, coming in a bit higher than the 2.25% growth, excluding fuel, it is anticipating for 2019. Kroger also said it planned a $1 billion share buyback, replacing the existing program, which had $546 million remaining. The grocery giant's bullish forecast comes as it forges ahead with an ambitious Restock Kroger campaign to revamp its business amid mounting competition for shoppers' dollars.
​​
Read the full article here.

We usually recommend that long term fundamental or value investors look to enter a stock at least 10% below our target price which in this case is $36.80. a good entry point into the stock of Kroger Company would therefore be at $ 33.10 or below.

​We expect that the stock of Kroger Company will kick upwards from its current price to levels closer to our target price/ full value price in coming weeks and months.

Next earnings release of Kroger Company