Las Vegas Sands is the world’s pre-eminent developer and operator of world-class Integrated Resorts. We deliver unrivaled economic benefits to the communities in which we operate. Sands created the meetings, incentives, convention and exhibition (MICE)-based Integrated Resort. Our industry-leading Integrated Resorts provide substantial contributions to our host communities including growth in leisure and business tourism, sustained job creation and ongoing financial opportunities for local small and medium-sized businesses.

​Our properties include The Venetian Resort and Sands Expo in Las Vegas and the iconic Marina Bay Sands in Singapore. Through majority ownership in Sands China Ltd., we have developed the largest portfolio of properties on the Cotai Strip in Macao, including The Venetian Macao, The Plaza and Four Seasons Hotel Macao, Sands Cotai Central and The Parisian Macao, as well as the Sands Macao on the Macao Peninsula. Sands is dedicated to being a good corporate citizen, anchored by the core tenets of serving people, planet and communities.

​“We delivered solid financial results in the quarter, with Adjusted Property EBITDA reaching $1.28 billion,” said Sheldon G. Adelson, chairman and chief executive officer. “We remain enthusiastic about our future growth opportunities in Asia. Next year, we will introduce approximately two million square feet of luxurious suite accommodations on the Cotai Strip with the opening of the Grand Suites at Four Seasons Macao and The Londoner Tower Suites.  Additional tourism and entertainment amenities of The Londoner Macao will debut throughout 2020 and 2021.  Looking further ahead, the expansion of Marina Bay Sands in Singapore will expand our suite capacity by 40% and introduce a state-of-the-art entertainment arena, both of which should contribute to growth in the future.  We are also aggressively pursuing additional development opportunities in new markets, including in Japan
​“Finally, we remain deeply committed to maintaining our industry-leading financial strength while continuing to increase the return of capital to shareholders. I am pleased to announce the Las Vegas Sands Board of Directors has approved an increase in our annual dividend for the 2020 calendar year, our eighth consecutive annual increase, to $3.16 per share, or $0.79 per share per quarter.” The company paid a recurring quarterly dividend of $0.77 per common share and continued its return of capital through share repurchases of $100 million during the quarter. The company announced its next quarterly dividend of $0.77 per common share will be paid on December 26, 2019, to Las Vegas Sands shareholders of record on December 17, 2019 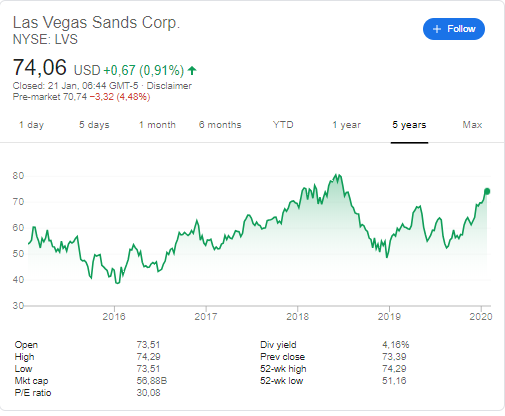 The extract below discusses the latest regarding Las Vegas Sands Corp as obtained from TheStreet.com

Shares of casino stocks were rising sharply Monday after analysts at J.P. Morgan published a note saying that the pro-democracy protests in Hong Kong won't have a material impact on gross gaming revenue in Macau. Las Vegas Sands (LVS) - Get Report shares rose 4.42% to $54.72, while MGM Resorts (MGM) - Get Report  gained 2.4% to $28.99 and Wynn Resorts (WYNN) - Get Report  climbed 6.8% to $112.74.

We usually suggest long term fundamental or value investors look to enter into a stock at least 10% below our target (full value) price which in this case is $64.90. Therefore we see a good entry point into Las Vegas Sands Corp stock at $58.40 or below. We expect the stock of Las Vegas Sands Corp to pull back from current levels in coming weeks and months to more realistic valuation levels closer to our target price (full value price)