Mcdonalds' management commentary on the results and earnings guidance

“With the strong results we achieved in the second quarter, we have now experienced 16 consecutive quarters of positive global comparable sales," said McDonald's President and Chief Executive Officer Steve Easterbrook. "By putting our customers at the centre of all our efforts to run great restaurants, enhance the customer experience and provide delicious menu offerings, we will continue to successfully execute our Velocity Growth Plan."
Second quarter highlights: In the U.S., second quarter comparable sales increased 5.7%, reflecting successful national and local deal offerings, including the 2 for $5 Mix and Match deal, the continued positive impact from our Experience of the Future deployment, and strength in our core menu items. Operating income for the quarter increased 5% as a result of the comparison to the strategic restructuring charge in the prior year.
Excluding this charge, operating income decreased 3%, reflecting lower gains on sales of restaurant businesses, partly offset by higher franchised margin dollars.

In the International Operated segment, second quarter comparable sales increased 6.6%, reflecting positive results across all markets, primarily driven by the U.K., France and Germany. The segment's operating income increased 3% (8% in constant currencies), primarily due to sales-driven improvements in franchised margin dollars. In the International Developmental Licensed segment, second quarter comparable sales increased 7.9%, reflecting strong sales performance across all geographic regions.
​
Steve Easterbrook concluded, "By engaging our guests on their terms, whether it's through delivery, an enhanced dining experience at one of our Experience of the Future restaurants, or through our evolving digital offerings, we're becoming a better McDonald's. We will continue to focus on our customers with innovative solutions to further elevate the guest experience and drive growth.” 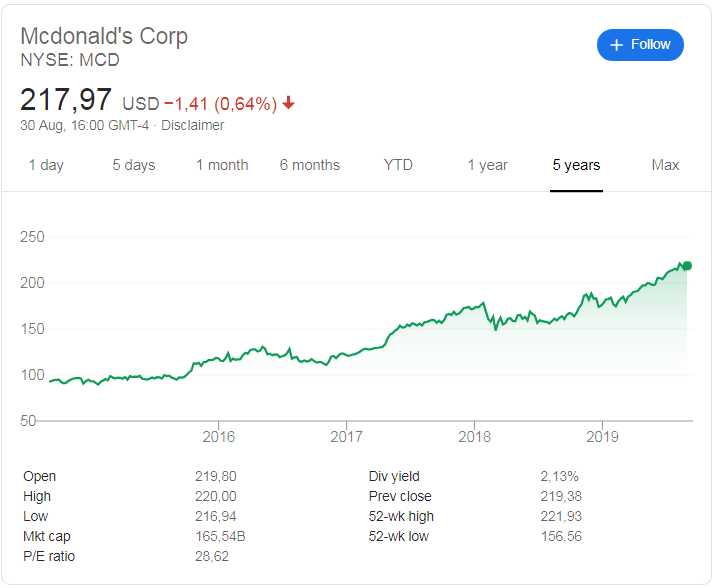 So based on Mcdonald's latest earnings report, what is our target price for Mcdonalds? And the question is given its strong stock price run in recent months and years is there still value in the company's stock price? We value the group's stock at $198 a share. We therefore believe from a fundamental investing and value perspective the stock price of Mcdonald's is overvalued and we would not recommend buying into the stock at its current price, but rather at levels about 10% below our target price. So we would suggest looking to buy Mcdonalds at close to $180 a share