A few shows and movies thats popular on Netflix

As a reminder, the quarterly guidance we provide is our actual internal forecast at the time we report. We strive for accuracy (not conservatism), which means that in some quarters we will be high and other quarters low relative to our guidance. In Q2’19, our membership growth forecast was high.

​Our missed forecast was across all regions, but slightly more so in regions with price increases. We don’t believe competition was a factor since there wasn’t a material change in the competitive landscape during Q2, and competitive intensity and our penetration is varied across regions (while our over-forecast was in every region). Rather, we think Q2’s content slate drove less growth in paid net adds than we anticipated. Additionally, Q1 was so large for us (9.6m net adds), there may have been more pull-forward effect than we realized. In prior quarters with over-forecasts, we’ve found that the underlying long-term growth was not affected and staying focused on the fundamentals of our business served us well.

​Q3 has started with Stranger Things season 3, and the first two weeks of Q3 are strong. In addition to the recently released season 3 of Stranger Things, our second half content slate includes new seasons of La Casa de Papel (Money Heist), The Crown, and the final season of the iconic Orange is the New Black as well as big films like The Irishman from Martin Scorsese and action movie 6 Underground (directed by Michael Bay and starring Ryan Reynolds). While our US paid membership was essentially flat in Q2, we expect it to return to more typical growth in Q3, and are seeing that in these early weeks of Q3. We forecast Q3 global paid net adds of 7.0m, up vs. 6.1m in Q3’18, with 0.8m in the US and 6.2m internationally. Our internal forecast still currently calls for annual global paid net adds to be up year over year. There’s no change to our 13% operating margin target for FY19, up 300 basis points year over year.

The image below, obtained from Google, shows the stock price history of Netflix (NASDAQ: NFLX) over the last 5 years. And it's been a exceptional time for Netflix (NASDAQ: NFLX). 5 years ago the stock was trading at around $65.70 and its currently trading at $263.08. That's a excellent return of 300% over the last 5 years. The stock is trading however trading at a lot closer to its 52 week low and is far far away from its 52 week high which to us is a clear indication that the short term sentiment and momentum of Netflix is very negative. In recent months the FAANG momentum stocks have been out of favour as the market wonders how these companies will maintain their lofty valuations. 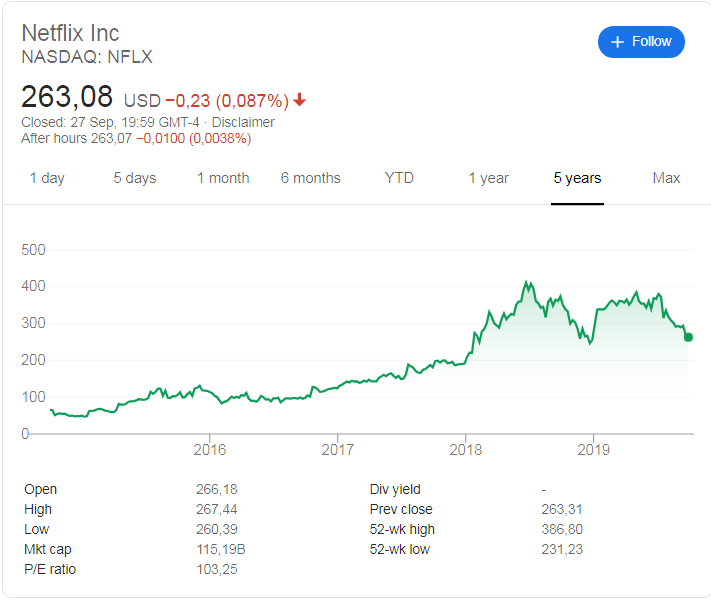 Recent coverage of Netflix as obtained from Zacks.

​Netflix (NFLX - Free Report) shares are down 2% in 2019 and have fallen 30% over the last 12 months. The streaming TV firm’s fall can be blamed on its massive Q2 subscriber miss. This worried Wall Street and investors as NFLX prepares to face new competition from Disney (DIS - Free Report) and Apple (AAPL - Free Report) in November.

NFLX Worries & Overview
Last quarter, Netflix added only 2.7 million paid memberships, well under Wall Street projections and its own 5 million forecast. On top of that, the Los Gatos, California-based company posted its first quarter-to-quarter subscriber decline in the U.S. since 2011. This is not the first time Netflix came up far short of its own estimates, but it did represent the largest miss over the last four years. Netflix executives blamed part of the subscriber miss on its new content schedule.

However, the company followed up its three previous subscriber shortfalls with massive, roughly one million membership beats the next quarter. For example, Netflix added 5.5 million subscribers in Q2 2018, when it projected 6.1. Then the firm added 6.1 million users in the third quarter of 2018 to blow away its 5.2 million forecast.

Looking ahead, Netflix expects to add 7 million paid users in the third quarter of 2019 to end the period with 158.6 million global subscribers. Company executives are confident that broader industry trends will work in their favor as more and more people cut the cord, especially internationally.

We struggle to see how Netflix can hold on to its current stock price for much longer, considering the fact that their subscriber number growth was well below their expectations for Q2, 2019. The current stock price suggests that it will take 73 years for stockholders to make back in current Netflix profits per share what they are currently paying for the stock That is a long time and is well above the market average of 21. And with subscriber numbers missing the group's expectations it looks like the market is waking up to the reality that Netflix wont see unabated strong growth in subscriber numbers indefinitely. And increased competition from Disney is bound to stunt Netflix subscriber numbers even further.

We suggest looking to buy Netflix at least 10% below our target (full value) price of $178.90. A good entry point into Netflix stock would therefore be around $161 a Netflix stock.