A few shows and movies thats popular on Netflix

​Fellow shareholders, In Q3, we grew to $5.2 billion in revenue, up 31% over the prior year, and operating income doubled to $1.0 billion. Paid net adds totaled 6.8m compared to our 7.0m forecast and prior year Q3 of 6.1m. As we’ve improved the variety, diversity and quality of our content slate, member engagement has grown, revenue has increased, and we’re able to further fund our content investment.

​In Q3’19, average streaming paid memberships and ARPU grew 22% and 9% year over year, respectively. Excluding a -$137m year over year impact from F/X, consolidated revenue growth was 35%, while streaming ARPU growth was 12%. Operating margin of 18.7% (up 670 bps year over year) was above our guidance due to timing of content and marketing spend, which will be more weighted to Q4’19. EPS amounted to $1.47 vs. $0.89 and included a $171 million non-cash unrealized gain from F/X remeasurement on our Euro denominated debt. Our Euro bonds provide us with a small natural hedge for our growing European revenues. Total paid net adds of 6.8m increased 12% year over year and was an all-time Q3 record. As a reminder, the quarterly guidance we provide is our actual internal forecast at the time we report and we strive for accuracy. In Q3, our guidance forecast was our most accurate in recent history.

​In the US, paid net adds totaled 0.5m in Q3 vs. our 0.8m forecast, and year to date paid net adds are 2.1m vs. 4.1m in the first nine months of 2018. Since our US price increase earlier this year, retention has not yet fully returned on a sustained basis to pre-price-change levels, which has led to slower US membership growth. On a member base of more than 60m, very small movements in churn can have a meaningful impact on paid net adds. However, revenue growth has been accelerating as US ARPU increased 16.5% year over year in Q3. With more revenue, we’ll continue to invest to improve our service to further strengthen our value proposition. International paid net additions totaled 6.3m in Q3, a 23% increase vs. 5.1m in the year ago quarter, and slightly above our 6.2m guidance forecast. The US dollar strengthened vs. several key currencies over the course of the quarter, which resulted in the variance between our forecasted vs. actual international revenue. International ARPU, excluding the impact of F/X, rose 10% year over year. We’re making strides in our key markets and, while we have much more work to do in Asia in the coming years, we are seeing encouraging signs of progress. For Q4, we’re expecting consolidated revenue to increase 30% year over year with 9% streaming ARPU growth. We’re forecasting 7.6m global paid net adds (vs. 8.8m last Q4), with 0.6m in the US and 7.0m for the international segment. This implies full year 2019 paid net adds of 26.7m, down from 28.6m last year. While we had previously expected 2019 paid net adds to be up year over year, our current forecast reflects several factors including less precision in our ability to forecast the impact of our Q4 content slate, which consists of several new big IP launches (as opposed to returning seasons), the minor elevated churn in response to some price changes, and new forthcoming competition. As we outline in more detail below, our long term outlook on our business is unchanged.

The stock is however trading at a lot closer to its 52 week low of $231.23 and is far far away from its 52 week high of $385.99,which to us is a clear indication that the short term sentiment and momentum of Netflix is very negative. In recent months the FAANG momentum stocks have been out of favour as the market wonders how these companies will maintain their lofty valuations. And part of the reason the Netflix has been struggling recently is that the market is worried about how new competition from Disney and Apple will affect the group's growth numbers and their reported earnings. But based on the numbers released by Netflix it looks like the worries and fears regarding Netflix has been misplaced. 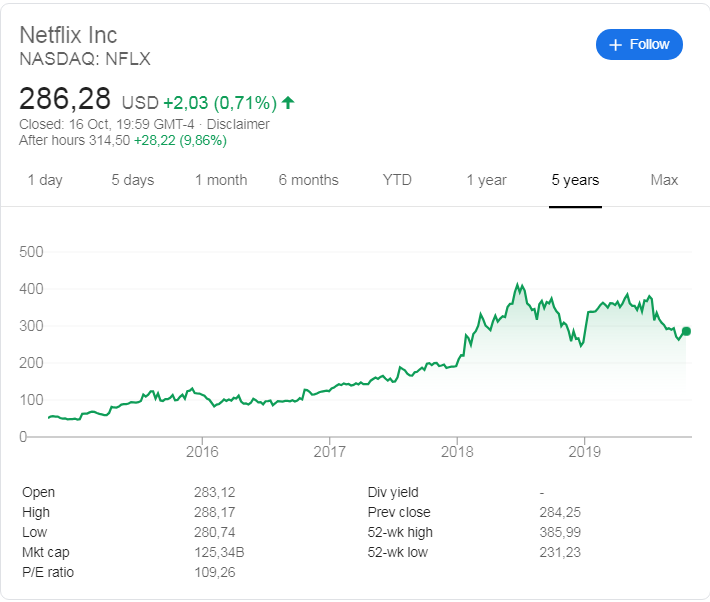 Netflix (NASDAQ: NFLX) stock price history over the last 5 years.
The image below shows the stock price action of Netflix on 16 October 2019, and the stock of Netflix surged by almost 10% in after hours trade after the release of Netflix's latest results. 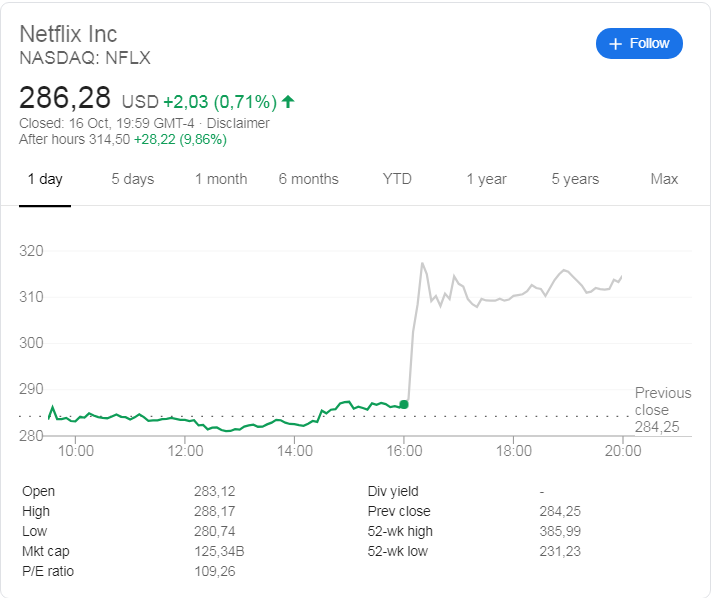 Recent coverage of Netflix's latest results as obtained from TheStreet.com

​With Netflix's (NFLX - Get Report) shares well below where they traded before a big subscriber miss was posted in July, markets are giving a thumbs-up to reported and guided subscriber numbers that missed official expectations but were better than feared. Investors might also be pleased with Netflix's plans to become a little more transparent about its international operations. After the bell on Wednesday, Netflix reported Q3 revenue of $5.25 billion (up 31% annually) and GAAP EPS of $1.47. Revenue was in-line, while EPS, which benefited from a $171 million, non-cash gain related to the revaluation of euro-denominated debt, beat a $1.03 consensus analyst estimate.

We struggle to see how Netflix can hold on to its current stock price for much longer, considering the fact that their subscriber number growth was well below their expectations for Q3, 2019. The current stock price suggests that it will take 50 years for stockholders to make back in current Netflix profits per share what they are currently paying for the stock That is a long time and is well above the market average of 21. And with subscriber numbers missing the group's expectations it looks like the market is waking up to the reality that Netflix wont see unabated strong growth in subscriber numbers indefinitely. And increased competition from Disney is bound to stunt Netflix subscriber numbers even further.

While we believe the stock of Netflix is very overvalued, we have upped our target (full value) price from just under $179 a stock based on Netflix's 2nd quarter 2019 earnings report.

We recommend entering the stock of Netflix at 10% or below our target (full value) price which in this case is $215. We therefore believe a good entry point into Netflix is $193.50 or below. Since the stock of Netflix is well above this price we would not recommend buying into Netflix right now as we believe there is still a lot of hope and fairytales and butterflies built into their future earnings expectations with the group trading at a PE ratio of close to 50.

It is expected that Netflix will release the 4th quarter of their 2019 fiscal year in mid January 2020.