Nvidia's management commentary on the results and earnings guidance

“We achieved sequential growth across our platforms,” said Jensen Huang, founder and CEO of NVIDIA. “Real-time ray tracing is the most important graphics innovation in a decade. Adoption has reached a tipping point, with NVIDIA RTX leading the way. “NVIDIA accelerated computing momentum continues to build as the industry races to enable the next frontier in artificial intelligence, conversational AI, as well as autonomous systems like self-driving vehicles and delivery robots,” he said.

​NVIDIA’s outlook for the third quarter of fiscal 2020 is as follows:

The image below shows the stock price history of Nvidia (NASDAQ: NVDA) for the last 5 years. And its been a excellent 5 years for stockholders of Nvidia. 5 years ago the stock was trading around $18.90 and today its trading at $181.94. Thats a massive 857% return provided by Nvidia stock over the last 5 years. While the returns over the last 5 years is impressive it has been struggling in recent months. An indication of this is the fact that group is trading at a lot closer to its 52 week low of $124.46 than it is to its 52 week high of $292.76 which is a clear indication that short term sentiment and momentum of Nvidia stock is negative. 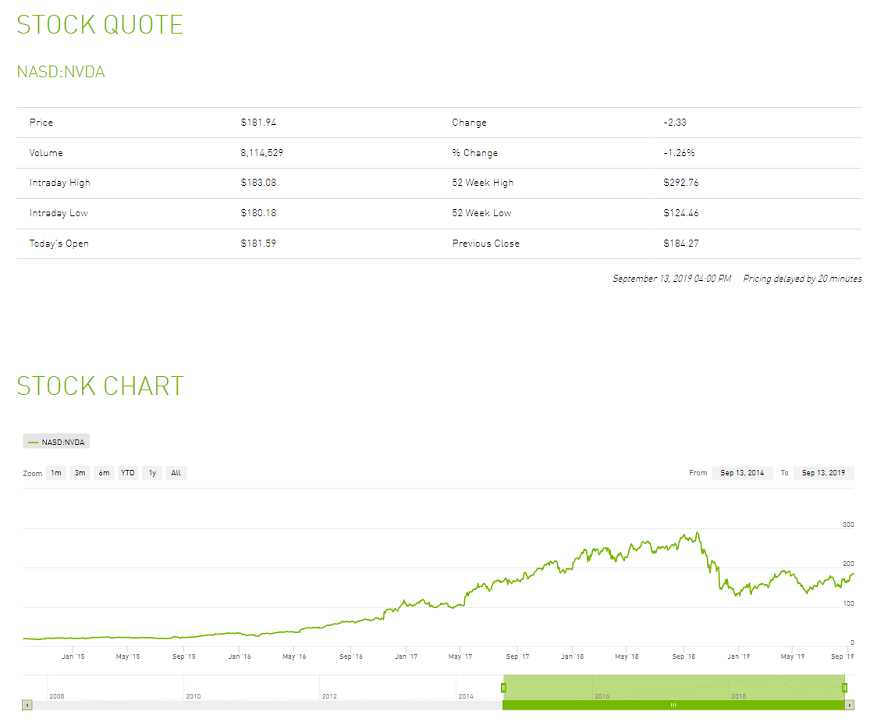 ​It has been about a month since the last earnings report for Nvidia (NVDA - Free Report) . Shares have added about 22.3% in that time frame, outperforming the S&P 500. Will the recent positive trend continue leading up to its next earnings release, or is Nvidia due for a pullback? Before we dive into how investors and analysts have reacted as of late, let's take a quick look at its most recent earnings report in order to get a better handle on the important drivers.

NVIDIA Q2 Earnings and Revenues Top Estimates
NVIDIA’s second-quarter fiscal 2020 non-GAAP earnings per share of $1.24 topped the Zacks Consensus Estimate of $1.15 but dropped 36% from the year-ago period. However, the bottom line improved 41% sequentially. Meanwhile, revenues of $2.58 billion beat the Zacks Consensus Estimate of $2.55 billion but declined 17% year over year. However, the top line rose 16% sequentially.


The better-than-expected results can be attributed to strength in automotive, gaming plus OEM and IP end-markets. However, weaknesses in data center market were a spoiler. Nonetheless, as the company witnessed a sequential progress across all its end-markets, management expects the business to have “normalized”.

Top-Line Details
Revenues at the GPU Business fell 21% year over year to $2.1 billion, reflecting deterioration in the gaming and data center GPUs. However, on a sequential basis, the metric grew 4%. Tegra Processor Business revenues worth $475 million inched up 2% on a year-over-year basis and 140% sequentially, driven by higher Automotive revenues. However, lower shipments of SOC modules for gaming platforms were a dampener.

On the basis of market platform, Gaming revenues were down 27% on a year-over-year basis to $1.3 billion due to decreased shipments of gaming desktop GPUs and SOC modules for gaming platforms. However, the same was up 24% sequentially, backed by better SOC modules for gaming platforms, gaming notebook GPUs and GeForce RTX SUPER gaming GPUs. Notably, the launch of Super line of gaming GPUs is making the management optimistic. The rising momentum in the games supporting the ray-tracing feature is a positive.

Meanwhile, revenues from Data Center deteriorated 14% year over year to $655 million as hyperscale customers witnessed soft sales from the segment. However, 3% sequential growth was generated from a rise in enterprise revenues, aided by expanding AI workloads. Automotive revenues in the reported quarter totaled $209 million, reflecting a 30% year-over-year and a 26% sequential increase. This upside was boosted by autonomous vehicle development deals and the solid uptake of AI-based smart cockpit infotainment solutions. Most importantly, a new development service agreement, mostly with Volvo, has been a key driver.

Moving to Professional Visualization, revenues climbed 4% year over year and 9% sequentially to $291 million. Strength across mobile workstation products is a key catalyst. OEM and IP revenues dipped 4% year over year to $111 million due to the absence of crypto-currency mining GPU sales. However, the same grew 16% sequentially owing to an uptick in shipments of embedded edge AI products

So based on the earnings report of Nvidia (NASDAQ: NVDA) and their fiscal outlook provided for their 3rd quarter what do we value Nvidia stock at? Based on the earnings reported and the fiscal guidance provided our valuation model provides a target (full value) price for Nvidia at $154.20 a stock. We therefore feel that the stock is overvalued and we would not recommend long term fundamental or value investors buy into the stock right now. We would suggest looking to get into the stock at 10% or more below our target (full value) price. Thus a good entry point would be around $138.80