We are a highly differentiated and fast-growing, extreme value retailer of brand name merchandise at drastically reduced prices. Known for our assortment of “Good Stuff Cheap,” we offer customers a broad selection of brand name products, including housewares, food, books and stationery, bed and bath, floor coverings, toys and hardware. Our differentiated go-to market strategy is characterized by a unique, fun and engaging treasure hunt shopping experience, compelling customer value proposition and witty, humorous in-store signage and advertising campaigns. These attributes have driven our rapid growth and strong and consistent store performance.

Mark Butler, our Chairman, President and Chief Executive Officer, co-founded Ollie’s in 1982, based on the idea that “everyone in America loves a bargain.” Since opening our first store in Mechanicsburg, PA, we have expanded throughout the Eastern half of the United States. Our no-frills, “semi-lovely” warehouse style stores average approximately 32,500 square feet and generate consistently strong financial returns across all vintages, geographic regions, population densities, demographic groups, real estate formats and regardless of any cotenant. Our business model has resulted in positive financial performance during strong and weak economic cycles. We believe there is opportunity for more than 950 Ollie’s locations across the United States based on internal estimates and third party research conducted by Jeff Green Partners, a retail real estate feasibility consultant that provides market analysis and strategic planning and consulting services.
​
Our constantly changing merchandise assortment is procured by a highly experienced merchant team, who leverage deep, long-standing relationships with hundreds of major manufacturers, wholesalers, distributors, brokers and retailers. These relationships enable our merchant team to find and select only the best buys from a broad range of brand name and closeout product offerings and to pass drastically reduced prices along to our customers. As we grow, we believe our increased scale will provide us with even greater access to brand name products because many large manufacturers favor large buyers capable of acquiring an entire deal. Our merchant team augments these deals with directly sourced products including Ollie’s own private label brands and other products exclusive to Ollie’s.

Ollie's management commentary on the results and earnings guidance

​Second Quarter Summary:
Mark Butler, Chairman, President and Chief Executive Officer, stated, “This was certainly, by Ollie’s standards, a tough quarter.  Despite the challenges we faced, we grew our top line by nearly 16%, driven, in part, by strong sales from the 29 stores we opened in the first half of the year, more than double the number opened in the same period last year, including 13 former Toys R Us locations.  The exceptional strength, rapid pace of openings and larger footprint of these new stores impacted comparable store sales through increased cannibalization and supply chain pressures that reduced comparable store inventory levels.  Comparable store sales were also affected by headwinds from store classes with exceptionally strong first-year sales now normalizing as they entered the comparable store base.  Our gross margin in the quarter was pressured by both unfavorable merchandise margin as well as deleveraging of supply chain costs as we underestimated the impact of our accelerated new store growth on our operations.   That said, we have made great strides in correcting these short-term issues, with comparable store inventory levels now back in line with our expectations.  With our deal flow as strong as ever, we’re delivering great bargains to our customers.”

Mr. Butler continued, “The strength of our new stores is, undoubtedly, the fuel for our growth. Despite the short-term impact on second quarter results, we are thrilled to see continued strength in these store openings and we remain committed to our long-term objectives driven by highly profitable new stores.  We remain confident and bullish on the strength of our model and our ability to deliver strong results and continued growth.”

​Fiscal 2019 Outlook
In light of these results and expectations for the remainder of the year, the Company is revising its full-year guidance, now estimating the following:

The image below shows the stock price history of Ollie's bargain outlets since its listing in the middle of 2015. At that time the stock was trading at close to $23 and it is currently trading at $62.66. That is a 172% return provided to Ollie stockholders in the last 4 odd years. Pretty significant growth that no stockholder would say no to. However the stock saw a sharp decline from $78 odd at the end of August to around $56 after the release of their latest earnings report. So the question is was the stock price decline justified based on the earnings report discussed above?

It is also trading at a lot closer to its 52 week low of $54.27 than it is to its 52 week high of $103.03, a clear indication that the short term momentum and sentiment towards the stock is negative. 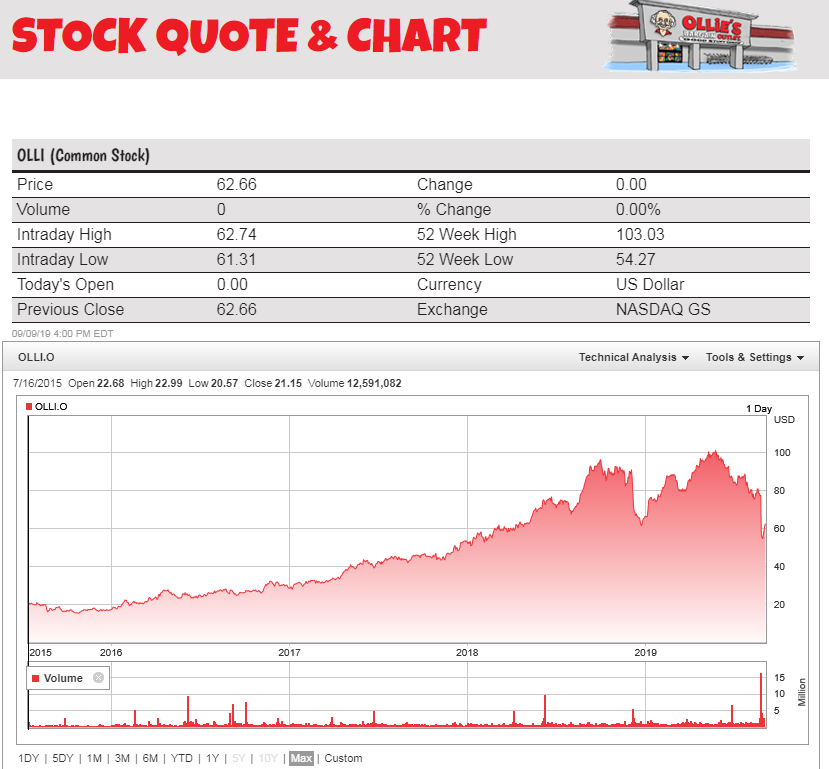 Notwithstanding this short-term blip, management is optimistic about its business model of “buying cheap and selling cheap,” and remains focused on improving store productivity and expansion of customer reward program, Ollie's Army.

Quarterly Results
Ollie’s Bargain delivered adjusted earnings of 35 cents a share that fell short of the Zacks Consensus Estimate of 46 cents. The figure also declined 12.5% from the year-ago quarter on account of increased cost of sales and higher SG&A expenses. Meanwhile, net sales improved 15.9% to $333.9 million but came below the consensus mark of $339.8 million. The increase in the top line can be attributed to robust new store performance, including 29 stores opened in the first half of fiscal 2019.

However, comparable-store sales declined 1.7% during the quarter under review, following an increase of 0.8% in the preceding period. We note that the figure also compared unfavorably with 4.4% increase registered in the prior-year quarter. Cannibalization of comparable stores and short-term supply chain pressures hurt the comparable-store sales performance. Moreover, store classes with outstanding first-year sales now normalizing as they entered the comparable store base, acted as headwind.

The original and full article can be found here

So what are Ollie's stock worth based on their latest earnings report and their fiscal guidance provided? Our valuation model provides a target (full value) price for Ollie's of $52 a stock. We therefore believe the market was justified in punishing the group's stock after the release of their latest earnings. We would therefore not recommend buying into Ollie's at this point in time. Rather look to enter the stock at at least 10% below our target price. So we would suggest looking to buy Ollie's stock at $47 or below