OSI Systems, Inc. (NASDAQ: OSIS) is a vertically integrated designer and manufacturer of specialized electronic systems and components for critical applications in homeland security, healthcare, defense and aerospace. At our core, we are a technology solutions company. Our research and development teams are focused on expanding and enhancing our product portfolios and delivering breakthrough technology solutions designed to keep pace with the rapidly changing marketplace.

​Our three operating divisions serve a large and growing worldwide customer base through an extensive distributor network and global operations in the Americas, the European Union, Middle East, and Asia Pacific.

OSI systems management commentary on the results and earnings guidance

HAWTHORNE, Calif.--(BUSINESS WIRE)--Aug. 26, 2019-- OSI Systems, Inc. (the “Company” or “OSI Systems”) (NASDAQ: OSIS) today announced financial results for the fourth quarter and fiscal year ended June 30, 2019. Deepak Chopra, OSI Systems’ Chairman and Chief Executive Officer, said, “We are pleased to announce a strong finish to an excellent year. Each division contributed to solid growth in fourth quarter revenues and earnings. With a healthy backlog and pipeline of opportunities, we believe the Company is well positioned as we enter fiscal 2020.”

During the three months ended June 30, 2019, the Company's book-to-bill ratio for equipment and related services (non-turnkey) was approximately 1.0. As of June 30, 2019, the Company's backlog was $911 million. Operating cash flow during the quarter ended June 30, 2019 was $31.4 million, and capital expenditures were $6.5 million, compared to $17.3 million and $6.8 million, respectively, for the comparable prior year period. Mr. Chopra stated, “Our Security division had another strong quarter. Driven by growth in cargo and RTT® sales, fourth quarter revenues in the division reached a record $195 million. We look forward to launching two new turnkey programs in the first half of fiscal 2020 and continuing the strong momentum.” Mr. Chopra further commented, “Our Optoelectronics and Manufacturing division continued its steady performance. Sales growth was solid with another quarter of year-over-year operating margin expansion.”

The image below shows the stock price history of OSI systems (NYSE: OSIS) for the last 5 years.  Its been a fairly volatile all be it upward trending ride for investors in OSI systems. Towards the end of 2014 the group's stock was trading at just above $60 and it is currently trading at just over $100 a share. 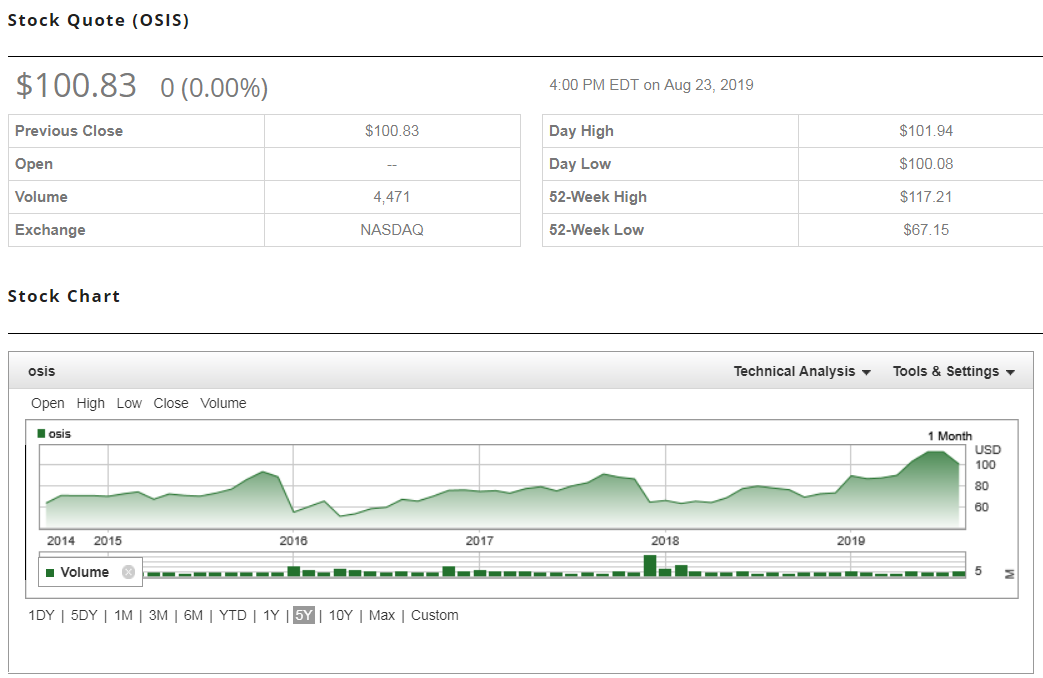 Based on the group's latest financial results we value them at $95.06 a share. We therefore believe the group's stock is fully valued and we would not recommend buying into the group at its current share price. Looking to enter the company's stock at a price around 10% below our target price (or full value price) of $95.06