The image below shows the group's strategy and acquisitions in recent years, which included buying Ben Sherman and Duck Head. 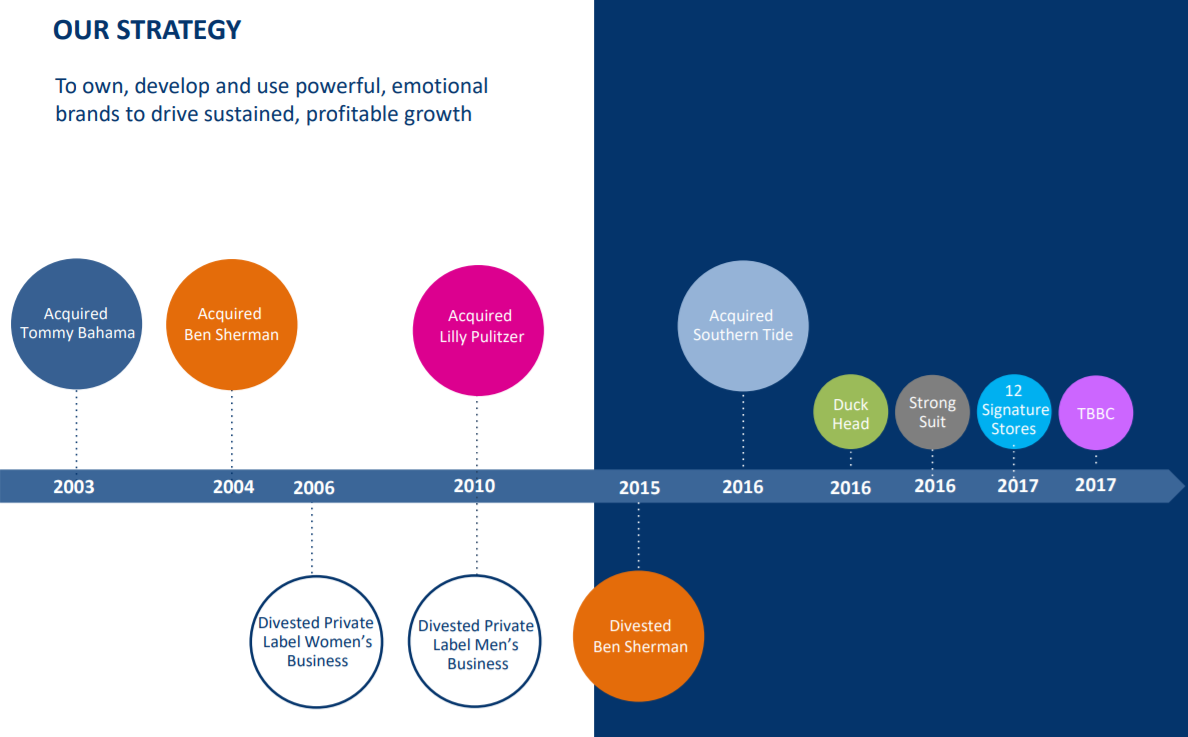 Oxford's management commentary on the results and earnings guidance

Thomas C. Chubb III, Chairman and CEO, commented, “Our second quarter results continued to demonstrate the strength of our full-price direct to consumer businesses.  For the tenth consecutive quarter, we posted consolidated comparable sales growth with comparable sales increasing 3% on top of a 7% increase in the prior year.  The top-line performance of our full-price direct to consumer channels was offset by lower wholesale sales and some softness in our outlet store business.

“Our Tommy Bahama, Lilly Pulitzer and Southern Tide businesses are built on a strong foundation.  It starts with the incredible connections each brand has established with its core consumer.  Our success is also rooted in our highly disciplined distribution strategy, which features exciting retail stores, bars and restaurants, a highly profitable and rapidly growing e-commerce business, and careful placement in appropriate department stores and specialty retailers.  Equally important is the work our product teams are doing to engage our consumers and drive demand across our brands by offering differentiated and innovative products using performance features, proprietary fabrics and prints, and fresh silhouettes.
​
Mr. Chubb concluded, “As we move into the second half of 2019, the fundamentals of our business remain strong.  We continue to focus on executing our growth strategies while working to minimize the impact of additional tariffs on both our consumers and our financial results.  While we have revised our outlook for the year to reflect the estimated increase in cost of goods associated with these tariffs on the back half of the year, we are still on track to deliver solid results in 2019 with confidence in the strength of our brands and our talented and dedicated people.

​Outlook for Fiscal Year 2019 and Third Quarter
The Company revised its guidance for fiscal 2019 to incorporate an estimated $0.20 per share impact resulting from additional tariffs in the second half of the year.

Dividend
The Company also announced that its Board of Directors has approved a cash dividend of $0.37 per share payable on November 1, 2019 to shareholders of record as of the close of business on October 18, 2019. The Company has paid dividends every quarter since it became publicly owned in 1960.

The image below shows the revenue by operating group as well as by distribution channel as at the end of their fiscal 2018. 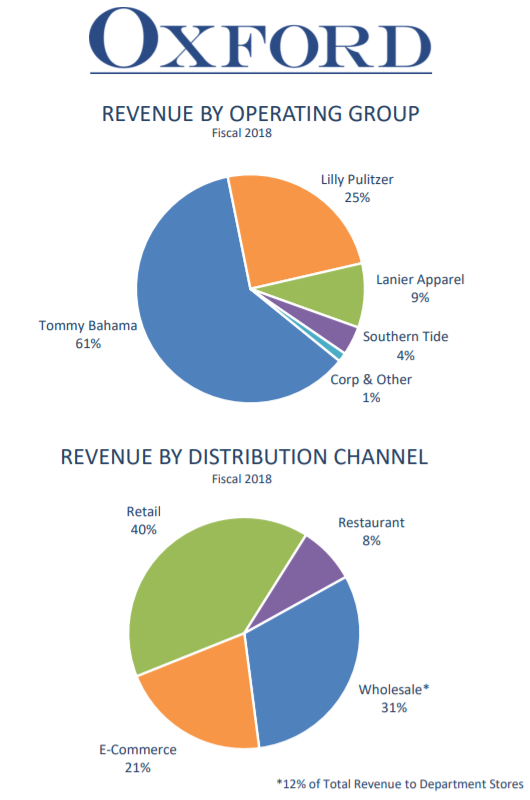 The image below, obtained from Google shows the stock price history of Oxford Industries. And its been a very volatile and slightly rewarding time for stockholders over the last 5 years. But the returns offered by Oxford Industries hardly shot the lights out over this period of time. Its increased 13.8% over the last 5 years. Interestingly the stock is also trading at a lot closer to its 52 week low of $63.50 than it is to its 52 week high of $93.52 which is a clear indication that the short term momentum and sentiment towards the group is more tilted to the negative than positive. 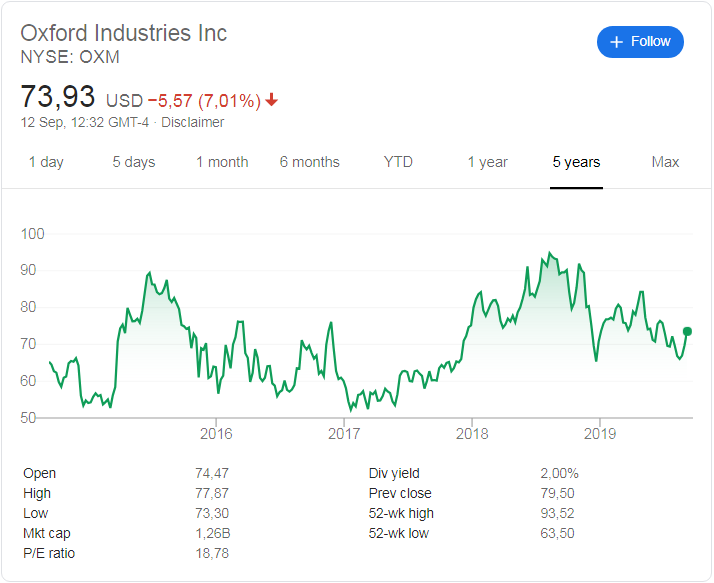 The extract below touches on the latest news regarding Oxford Industries as obtained from Zacks.

Oxford Industries (OXM - Free Report) came out with quarterly earnings of $1.84 per share, missing the Zacks Consensus Estimate of $1.86 per share. This compares to earnings of $1.83 per share a year ago. These figures are adjusted for non-recurring items. This quarterly report represents an earnings surprise of -1.08%. A quarter ago, it was expected that this owner of the Tommy Bahama, Lilly Pulitzer and Southern Tide clothing lines would post earnings of $1.22 per share when it actually produced earnings of $1.30, delivering a surprise of 6.56%.
Over the last four quarters, the company has surpassed consensus EPS estimates two times.
Oxford Industries, which belongs to the Zacks Textile - Apparel industry, posted revenues of $302 million for the quarter ended July 2019, missing the Zacks Consensus Estimate by 1.94%. This compares to year-ago revenues of $302.64 million. The company has topped consensus revenue estimates just once over the last four quarters.

The sustainability of the stock's immediate price movement based on the recently-released numbers and future earnings expectations will mostly depend on management's commentary on the earnings call. Oxford Industries shares have added about 10% since the beginning of the year versus the S&P 500's gain of 18.9%