Investments made by Saratoga across 8 distinct industries

Saratoga's management commentary on the results and outlook

​“The second fiscal quarter of 2020 has been important for us with many significant accomplishments”, said Christian L. Oberbeck, Chairman and Chief Executive Officer of Saratoga Investment. “1) We received approval for a second SBIC license, providing us access to up to $175 million in additional long-term, low-cost capital in the form of SBA debentures to further enable us to support our core small business constituency; 2) Our second quarter performance metrics were also exceptionally strong with LTM return on equity of 14.3% and an increase in NAV per share of $0.41 to $24.47. Our adjusted NII per share of $0.68, taking into account our newly issued ATM shares, still over-earned our current $0.56 dividend per share, which was recently increased for the twentieth sequential quarter; 3) Our continued strong price and volume stock market performance enabled us to issue $34.1 million of equity accretively under our existing ATM program in Q2, importantly providing initial equity capitalization for this new second SBIC license; 4) Asset quality and growth were strong this quarter, with $2.6 million of net realized and unrealized gains on investments, and AUM growing by 19% to $486.9 million; and 5) with our new second SBIC license our dry powder has expanded significantly, providing us the ability to grow our AUM by a further 50% utilizing the current liquidity and committed credit facilities at our disposal.”

Michael J. Grisius, President and Chief Investment Officer, added, “This fiscal quarter has again demonstrated our ability to build AUM without sacrificing quality, as our investments grew by 19% from last quarter, while those rated in our highest category remained at 99%. We always emphasize that quarterly portfolio growth can be lumpy and is dependent on various factors, including a robust pipeline, credit quality of deal pipeline, and the level of repayments – this past quarter we benefitted from all three. We’ve accomplished this amid macroeconomic conditions and lending dynamics in the lower middle market that continue to provide headwinds, with LIBOR again decreasing this quarter. We also continue to bring new platform investments into the portfolio, with four more investments in new companies added this quarter, and two more since quarter-end. We remain confident that our experienced origination team, exceptional underwriting standards and tested investment strategy and focus will continue to steadily grow portfolio size and maintain quality over the long-term.” 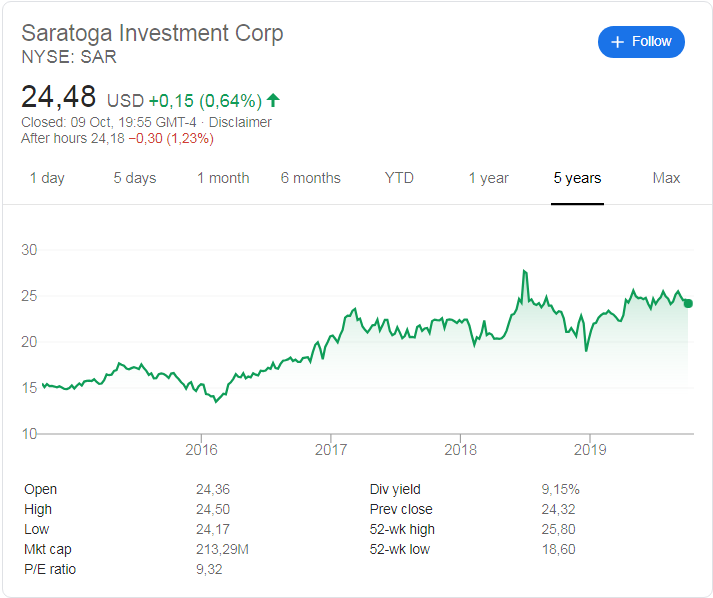 Saratoga Investment (SAR - Free Report) came out with quarterly earnings of $0.68 per share, beating the Zacks Consensus Estimate of $0.60 per share. This compares to earnings of $0.69 per share a year ago. These figures are adjusted for non-recurring items. This quarterly report represents an earnings surprise of 13.33%. A quarter ago, it was expected that this business development company would post earnings of $0.57 per share when it actually produced earnings of $0.60, delivering a surprise of 5.26%.
Over the last four quarters, the company has surpassed consensus EPS estimates four times. Saratoga Investment, which belongs to the Zacks Financial - SBIC & Commercial Industry industry, posted revenues of $13.89 million for the quarter ended August 2019, surpassing the Zacks Consensus Estimate by 9.57%. This compares to year-ago revenues of $11.40 million. The company has topped consensus revenue estimates four times over the last four quarters.

The sustainability of the stock's immediate price movement based on the recently-released numbers and future earnings expectations will mostly depend on management's commentary on the earnings call. Saratoga Investment shares have added about 22.4% since the beginning of the year versus the S&P 500's gain of 15.4%

So what is Saratoga Investment Corporation's stock worth based on the release of their latest earnings report? Well for investment holding companies such as Saratoga the main variable to look at when calculating the value of the group is not earnings per share or cash generated per share or dividends declared as one would use in regular valuation models, but rather the group's stated Net Asset Value per share. The value each stockholder would get i they sold all their assets, paid all liabilities and distributed what is left equally amongst stockholders.

Based on Saratoga's latest earnings report provided their stated Net Asset Value is $24.47 a Saratoga stock.  We therefore believe that the stock is fully valued.

We usually suggest long term fundamental or value investors look to enter into a stock at least 10% below our target (full value) price which in this case is $24.47. Therefore we see a good entry point into Saratoga's stock at $22 or below. We expect the stock of Saratoga to continue trading at relatively close to its stated net asset value per share in coming weeks and months. We therefore rate the stock as a hold.