About Sears Hometown and Outlet stores

Sears Hometown and Outlet Stores, Inc., is a publicly traded (NASDAQ:SHOS) national retailer primarily focused on selling home appliances, hardware, tools and lawn and garden equipment. We operate through two segments—the Sears Hometown and Hardware segment and the Sears Outlet segment.
​
On June 3rd, 2019 we announced that we and Transform Holdco LLC (“Transform” or “the new Sears”), a leading integrated retailer and home to Sears and Kmart Transform Holdco LLC (“Transform”), entered into a definitive merger agreement whereby Transform will acquire the outstanding shares of Sears Hometown not owned by ESL Investments, Inc. and its affiliates after first affording the Company an opportunity for a specified period of time to sell the Company’s Sears Outlet and Buddy’s Home Furnishing Stores businesses (together, the “Outlet Segment”) to a third party

Sears Hometown's management commentary on the results and earnings guidance

Will Powell, Chief Executive Officer and President, said, “Our announcement on June 3, 2019 that we had entered into a definitive merger agreement with Transform Holdco LLC was the first of two major milestones for the Company. The second major milestone for the Company was the August 27, 2019 announcement that we had entered into a definitive agreement with Liberty Tax, Inc. to sell our Sears Outlet segment and our Buddy’s Home Furnishing Stores as authorized by our merger agreement with Transform. This announcement followed an extensive process to market and seek to sell these businesses to a wide array of potential interested parties. We are currently estimating that, as a result of the sale of the Outlet/Buddy's businesses, the Net Proceeds (as defined in the Transform merger agreement) from the Outlet/Buddy's sale will be approximately $121 million. We are also currently estimating that as a result of the Outlet/Buddy's sale the merger consideration payable by Transform in the merger for the Company's outstanding shares not owned by ESL Investments, Inc. and its affiliates will be approximately $3.25 per share in cash, which would be an increase of approximately $1.00, or approximately 44.4%, from the previously announced base merger consideration of $2.25 per share. The actual increase, if any, in the per share base merger consideration payable in the merger transaction with Transform will depend on the actual amount of Net Proceeds realized by the Company from the Outlet/Buddy's sale, which may be lower than the current estimate."

Merger Agreement with Transform
The Company announced on June 3, 2019 that it, Transform Holdco LLC ("Transform," which is an affiliate of ESL Investments, Inc and its affiliates including Edward S. Lampert (together “ESL”)), and Transform Merger Corporation, a wholly owned subsidiary of Transform (“Merger Subsidiary”), had entered into an Agreement and Plan of Merger dated as of June 1, 2019 (the “Merger Agreement”) pursuant to which Merger Subsidiary will merge with and into the Company (the “Merger”) after first giving the Company an opportunity for a specified period of time to sell the Company’s Sears Outlet segment and Buddy’s Home Furnishing Stores (together, the “Outlet Segment” or "Outlet") to a third party. At the completion of the Merger, each share of the Company’s outstanding common stock not owned by ESL will be converted into the right to receive an amount in cash equal to $2.25 per share (the “Base Merger Consideration”), subject to an upward adjustment if a sale of the Outlet Segment (an “Outlet Sale”) has occurred that satisfies criteria specified in the Merger Agreement (the “Sale Criteria”).

The per share upward adjustment to the Base Merger Consideration, if any, will be calculated by dividing ]
(i) the excess, if any, of the Net Proceeds received by the Company as a result of the Outlet Sale over the Outlet Sale Minimum Proceeds by
(ii) the aggregate number of shares of Company common stock and unvested Company stock units issued and outstanding as of the closing of the Merger. Under the terms of the Merger Agreement, Transform will have the opportunity to match the economic terms of any proposed Outlet Sale to a third party that is expected to result in Net Proceeds to the Company of less than $120 million. According to publicly available information, ESLowns more than 54% of the outstanding shares of the Company’s common stock.

The image below, obtained from Google, shows the stock price history of Sears Hometown (NASDAQ: SHOS) over the last 5 years. And its not been a great time for the group. 5 years ago Sears Hometown stock was trading around $16 a stock, and they are currently trading at $3.81 This is a negative return of -76% over the last 5 years. The stock recently saw a uptick in its price after merger details were announced. But this will be little solice to investors who bought the stock 5 years ao. 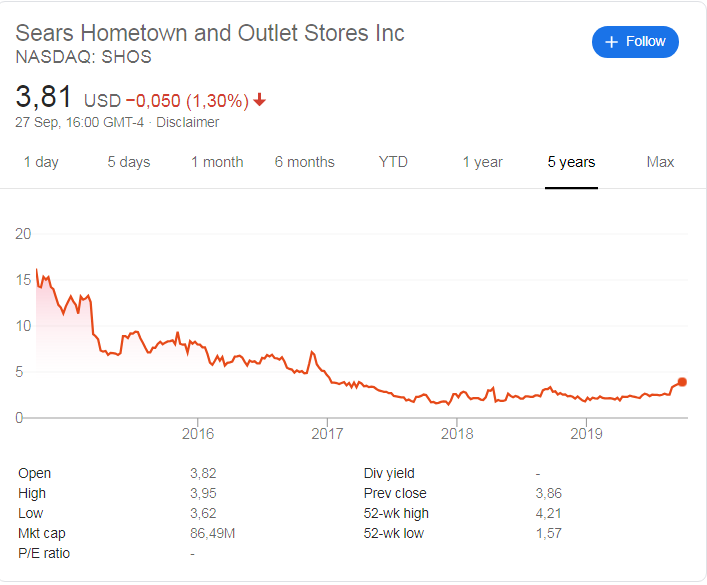 While they are undervalued we would not recommend buying into the company at this point. Rather sit on the sidelines and what the corporate activities taking place play out first before committing into Sears Hometown. Another reason we would hold off on buying is the strong decline in their top line (revenue) and the fact that the US economy is slowing down, and this group's fortunes are directly linked to those of US consumers looking to buy semi-durabe and durable goods.