NEW YORK--(BUSINESS WIRE)-- Shake Shack Inc. (“Shake Shack” or the “Company”) (NYSE:SHAK) today reported its financial results for the third quarter ended September 25, 2019, a period that included 13 weeks.
​
​Randy Garutti, Chief Executive Officer of Shake Shack, stated, “We're pleased to report total revenue grew nearly 32% and the team delivered another quarter of positive Same-Shack sales of 2%, continuing to drive positive traffic of 1.2%. Based on our results to date, we are raising our 2019 revenue guidance, including our licensing revenue guidance."

Garutti concluded, “This has been the biggest development year in Shack history as we’ve grown our presence around the country and internationally in the new markets of Mainland China, Singapore, the Philippines and Mexico. In 2020, we will continue to expand even further within key domestic and international markets. Overall, we continue to execute this year’s plan while gearing up for the key strategic initiatives of 2020. We’ll be focused more than ever on putting our people first, simplifying and supporting our operations, and enhancing our winning guest experience."
Updated 2019 Outlook

The stock of  Shake Shack  is trading at a lot closer to its 52 week low of $40.67 than it is to its 52 week high of $105.84 which to us is a clear indication that the short term momentum and sentiment of  Shake Shack stock is very negative right now. And we suspect the sharp decline yesterday force numerous investors to sell based on margin calls and getting squeeze, which flooded the market with even more shares forcing the price down even further. 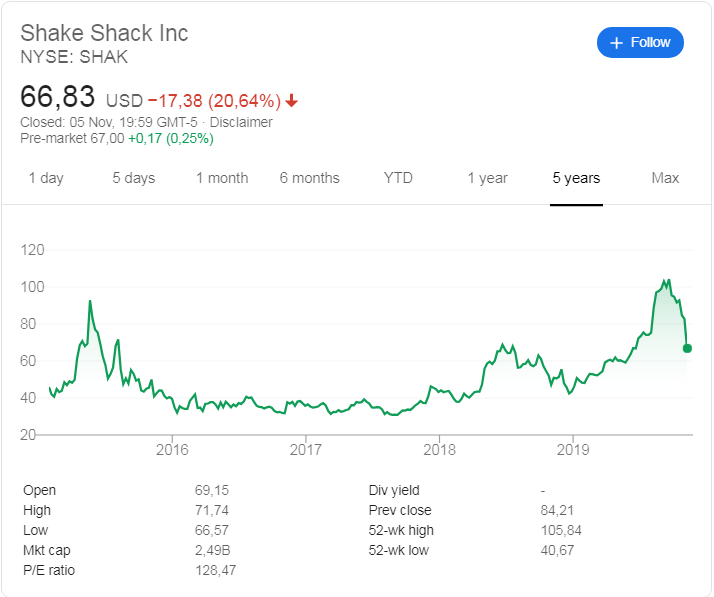 The extract below discusses the meltdown of Shake Shack stock price following their earnings release as obtained from TheStreet.com

​Shares of Shake Shack (SHAK - Get Report) slumped after the burger chain's third-quarter revenue and same-store sales trailed expectations, even as adjusted earnings per share beat expectations. Revenue increased 32% in the latest quarter from a year earlier, to $157.8 million. But analysts polled by Bloomberg anticipated $157.92 million, according to Yahoo.

And same-store sales climbed 2%, lagging analysts' forecast of a 2.9% gain. The 2% increase consisted of a 1.2% increase in customer traffic and a combined increase of 0.8% in price and sales volume. Shake Shack's restaurant level operating margin fell to 23.1% in the third quarter from 25.8% a year ago. The decline stemmed from rising food and paper costs, the company said.

On the positive side, adjusted earnings per share totaled 26 cents in the latest quarter, compared to analysts' projection of 21 cents, according to Yahoo.
Net income surged to $11.4 million, or 31 cents a share, in the third quarter from $6.9 million, or 17 cents per share a year earlier. Shake Shack also raised its full-year 2019 revenue guidance to a range of $592 million to $597 million from its prior range of $585 million to $590 million. But the company trimmed its full-year forecast for same-store sales growth to 1.5% from 2% previously. "This has been the biggest development year in Shack history as we've grown our presence around the country and internationally in the new markets of Mainland China, Singapore, the Philippines and Mexico," Shake Shack CEO Randy Garutti said in a statement. 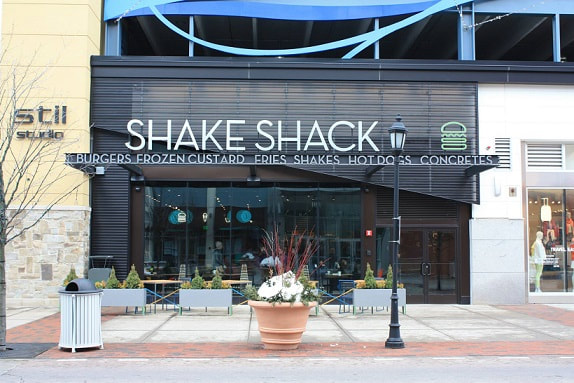 We usually recommend that long term fundamental or value investors look to enter a stock at least 10% below our target price which in this case is $52.90. We therefore believe a good entry point into the stock of  Shake Shack is at $47.61 or below.