A Six Flags ride in one of their entertainment parks

“I am very pleased with our continued strong momentum, especially with the execution of our premium-priced membership program,” said Jim Reid-Anderson, Chairman, President and CEO. “I am confident 2019 will be the tenth consecutive record year for our shareholders as we continue to innovate and deliver on our five-pillar strategy to drive our business toward achieving our aspirational goal of $750 million of Modified EBITDA3 by 2021.”

​The company’s success in upgrading guests from single day tickets and season passes to premium-priced memberships resulted in the number of memberships in the Active Pass Base increasing more than 25 percent as of June 30, 2019, versus the comparable prior year period. Members are the company’s most loyal and valuable guests, with improved retention rates and higher revenue, especially from the premium tiers, compared to traditional season passes. 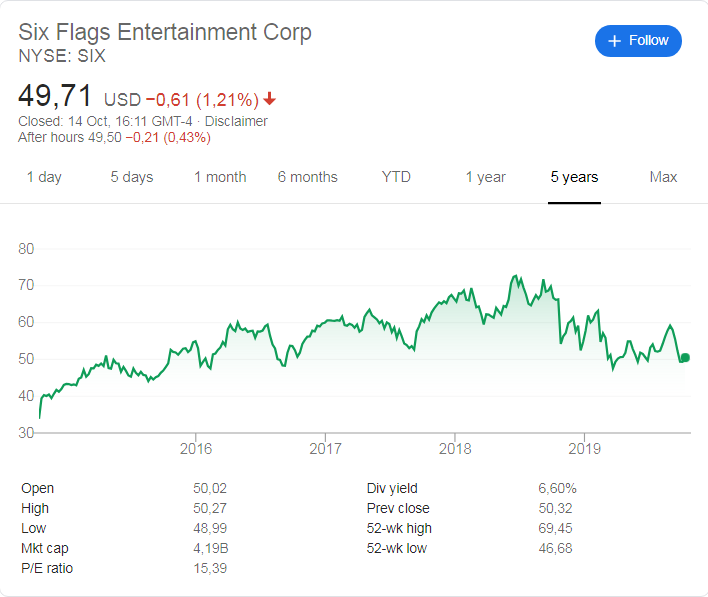 The extract below  discusses the latest regarding Six Flag's potential takeover of Cedar Fair as obtained from TheStreet.com
.
Cedar Fair (FUN - Get Report)  shares jumped as much as 11% Wednesday after Reuters reported the company has received an acquisition proposal from fellow theme-park operator Six Flags Entertainment.  (SIX - Get Report) .Citing people familiar with the matter, Reuters reported that Cedar Fair is considering a cash-and-stock offer from Six Flags.
​
The sources told Reuters that there's no certainty that a deal will be reached. Six Flags declined comment. Cedar Fair couldn't immediately be reached for comment. Cedar Fair shares climbed to an intraday high of $64.86, before pulling back. At last check the shares were up 2.4% to $59.60.​

Rides at one of Six Flags' entertainment venues

We usually suggest that long term and fundamental investors get in at least 10% below our target (full value) price which in this case is $60.20 Therefore we believe a good entry point into Six Flags stock is at $54.80 or below.  And since Six Flags is trading at below our suggested entry point into the stock we rate Six Flags as a buy.

The release of Six Flags 3rd quarter 2019 earnings report on the 22 October 2019 will in all likelihood be the driver of the Six Flags stock price movement in coming weeks and months, together with the potential news that Six Flags might be acquiring Cedar Fair (FUN)