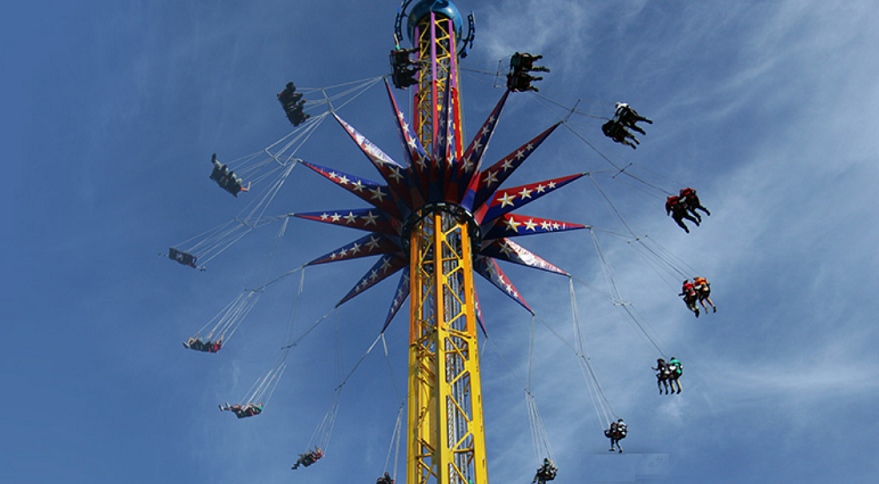 A Six Flags ride in one of their entertainment parks

GRAND PRAIRIE, Texas--(BUSINESS WIRE)-- Six Flags Entertainment Corporation (NYSE: SIX), the world’s largest regional theme park company and the largest operator of waterparks in North America, today announced revenue was $621 million for the third quarter of 2019, a $1 million increase over the same period in 2018. The increase in revenue was attributable to attendance growth of 3 percent, or 440,000, to 14.0 million guests in the third quarter of 2019, which was partially offset by a 1 percent decrease in guest spending per capita and an expected 26 percent decrease in sponsorship, international agreements and accommodations revenue.

“We were pleased to achieve record attendance and revenue for the first nine months of 2019, with solid growth across both our legacy and newly acquired parks,” said Jim Reid-Anderson, Chairman, President and CEO. “As a team, we are laser focused on achieving our tenth consecutive record year by driving our strategic growth areas, including growing penetration of our membership programs to benefit from the enhanced loyalty and lifetime value of members.”

Total guest spending per capita for the third quarter of 2019 was $42.44, a reduction of $0.58 compared to the third quarter of 2018. Admissions per capita decreased 3 percent to $25.17 and in-park spending per capita increased $0.11 to $17.27 compared to the same period in 2018. Several factors contributed to the reduction in admissions per capita. First, there was a higher proportion of attendance from the company’s Active Pass Base, representing the total number of guests who are enrolled in the company’s membership program or who have a season pass, which puts downward pressure on admissions per capita spending. Second, the company engaged in strategically targeted promotions to drive membership penetration. Third, there were attendance gains at the company’s new parks, which have significantly lower admissions per capita than the existing parks. Finally, a portion of new membership revenue is deferred into the following year due to the 12-month commitment period spanning the calendar year-end. These impacts were partially offset by ticket price increases and sales of higher-priced membership tiers.

Attendance at the company’s parks for the first nine months of 2019 grew to 26.7 million guests, an increase of 989,000 guests compared to the first nine months of 2018. The increase in attendance was primarily driven by the higher Active Pass Base, growth in the parks the company began operating on June 1, 2018, and the new park in Rockford, Illinois. Guest spending per capita decreased less than 1 percent to $42.86 for the first nine months of 2019, compared to the prior year period, with admissions per capita decreasing 2 percent to $25.15 and in-park spending per capita increasing 1 percent to $17.71.
​
The Active Pass Base increased 2 percent year-over-year as a result of the company’s continued success in upselling guests from single day tickets to memberships and season passes. The mix of memberships in the Active Pass Base increased significantly as a result of the company’s efforts to increase penetration. Members are the company’s most loyal and valuable guests, with higher revenue, retention rates and lifetime value compared to traditional season passes. Deferred revenue of $198 million, a record high for the third quarter, increased by $5 million, or 2 percent, compared to September 30, 2018. 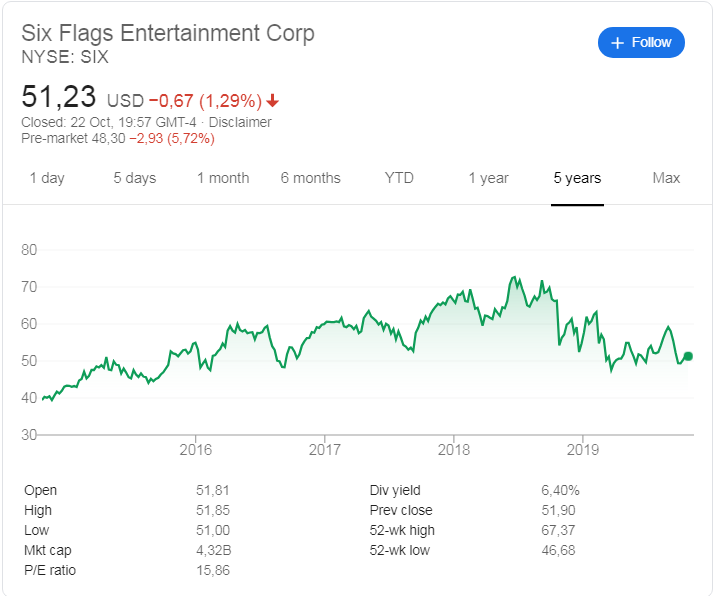 The extract below discusses Six Flag's reduced borrowing costs as obtained from TheStreet.com

Six Flags Entertainment Corporation (NYSE: SIX), the world's largest regional theme park company and the largest operator of waterparks in North America, today announced that its bank lenders have approved a reduction to the borrowing rate on the Company's $798 million Term Loan B Credit Facility. The overall borrowing rate was reduced by one-quarter of one percent, moving from a rate of LIBOR plus 2.00 percent to a rate of LIBOR plus 1.75 percent. Excluding the costs of the transaction, the lower borrowing rate will save the Company approximately $2.0 million annually in interest costs. 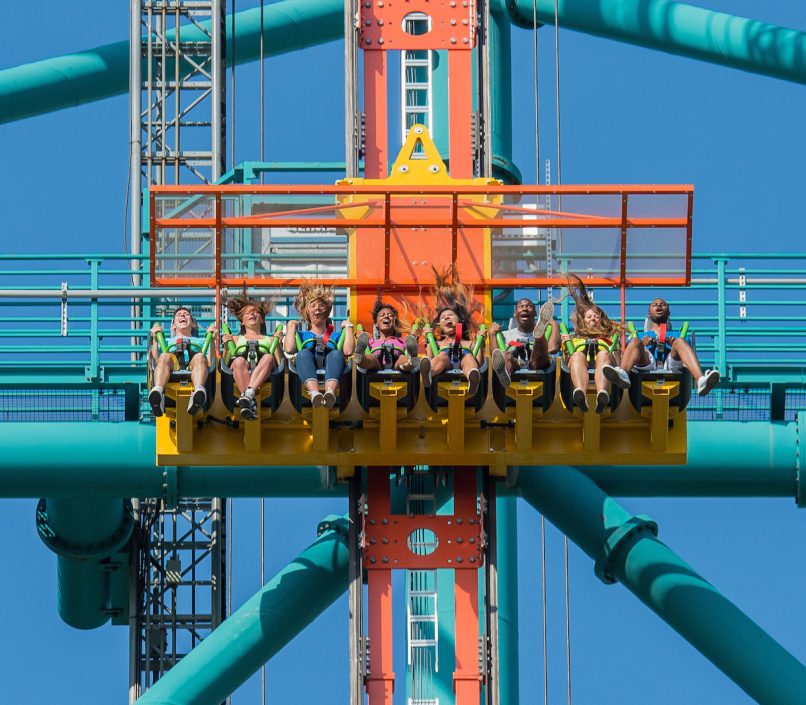 Jumanjaro, drop of doom at one of Six Flag's entertainment parks

We usually suggest that long term and fundamental investors get in at least 10% below our target (full value) price which in this case is $58.30 Therefore we believe a good entry point into Six Flags stock is at $52.50or below.  And since Six Flags is trading at below our suggested entry point into the stock we rate Six Flags as a buy.

It is expected that Six Flags (NYSE: SIX) 4th  quarter 2019 earnings report will be released in late Janaury 2020