In its 49th year of service, Dallas-based Southwest Airlines Co. (NYSE: LUV) continues to differentiate itself from other air carriers with exemplary Customer Service delivered by more than 60,000 Employees to a Customer base topping 130 million passengers annually. Southwest became the nation’s largest domestic air carrier in 2003 and maintains that ranking based on the U.S. Department of Transportation’s most recent reporting of domestic originating passengers boarded. In peak travel seasons, Southwest operates more than 4,000 weekday departures among a network of 101 destinations in the United States and 10 additional countries.
​
Southwest coined Transfarency® to describe its purposed philosophy of treating Customers honestly and fairly, and low fares actually staying low. Southwest is the only major U.S. airline to offer bags fly free® to everyone (first and second checked pieces of luggage, size and weight limits apply, some carriers offer free checked bags on select routes or in qualified circumstances), and there are no change fees, though fare differences might apply.
Southwest is committed to returning value to its Shareholders. Since 2010, Southwest has returned more than $11.7 billion to Shareholders through share repurchases and dividends, through September 30, 2019. In the first nine months of 2019, Southwest returned $1.8 billion to Shareholders through the repurchase of $1.45 billion in common stock and the payment of $372 million in dividends.

Gary C. Kelly, Chairman of the Board and Chief Executive Officer, stated, "Our third quarter 2019 record financial performance was notable considering an estimated $210 million reduction in operating income due to the continued grounding of the Boeing 737 MAX 8 aircraft (MAX). Notwithstanding this challenge, we generated record third quarter operating and unit revenues; solid margins; strong cash flows and returns to Shareholders; and a healthy profitsharing accrual for our Employees. I am extremely grateful to our People for their unwavering commitment to the highest levels of Customer Service, and applaud them for one of the best third quarter operational performances in our history.

"We are engaged in ongoing discussions with The Boeing Company (Boeing) regarding compensation for damages related to the MAX groundings. The operating income reduction from the MAX groundings is estimated to be $435 million for the nine months ended September 30, 2019, and we expect the damages to continue to grow into 2020. We have not reached a settlement with Boeing, and no estimated settlement amounts have been included in our third quarter 2019 results.

"Boeing stated yesterday they are targeting regulatory approval of MAX return to service in fourth quarter 2019. Upon a rescission of the Federal Aviation Administration (FAA) order to ground the MAX, we continue to estimate it will take us one to two months to comply with applicable FAA directives, including all necessary Pilot training. As such, the MAX has been removed from our flight schedule through February 8, 2020. The FAA will determine the timing of MAX return to service, and we offer no assurances that current estimations and timelines are correct.

"I am proud of the superb job our People are doing to manage the financial and operational impacts of the MAX-related flight schedule adjustments. Third quarter 2019 unit revenue growth was a strong 4.2 percent, year-over-year, which was in line with our expectations. And, we continue to control costs despite significant year-over-year unit cost pressures resulting from the MAX groundings.

"We recently announced that new service between Sacramento and Honolulu, and between Honolulu and Lihue, will begin in November 2019, accelerated from our previous plan to start in January 2020. New flights from Oakland and San Jose to both Lihue and Kona, and new interisland service between Honolulu and Hilo, and between Kona and Kahului, will begin in January 2020. By March 2020, we plan to offer 12 daily departures from California to Hawaii, and 34 daily departures among the Hawaiian Islands. We are very pleased with the strength of Customer demand for Southwest service in Hawaii, and it will continue to be a focus for growth in 2020.

"Our network is performing extremely well, and we look forward to resuming our growth next year once the MAX is returned safely to service. Although our 2019 and 2020 plans have been affected, our long-term financial goals remain unchanged: maintain a strong balance sheet, investment-grade credit ratings, and ample liquidity; generate robust operating and free cash flows; grow earnings, margins, and capital returns; and maintain healthy Shareholder returns." 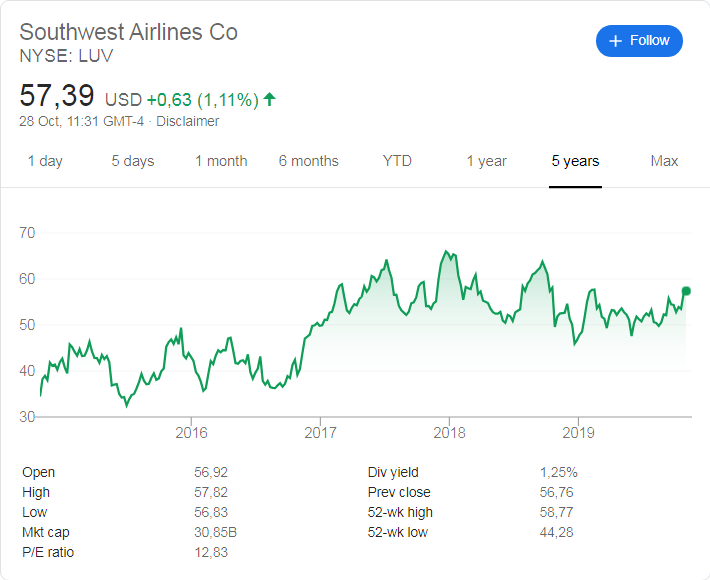 The extract below discusses the latest news regarding Soutwest Airlines as obtained from TheStreet,com

​Southwest Airlines ( LUV - Get Report) reported third-quarter earnings of $1.23 a share, beating estimates of $1.08, but said operating income was reduced by $435 million in the first nine months of the year on the grounding of Boeing's ( BA - Get Report) 737 MAX jet. Revenue of $5.64 billion matched Wall Street forecasts. The company last year earned $1.08 a share on revenue of $5.58 billion.

Southwest Airlines is the biggest customer for Boeing's 737 Max jet, which has been grounded worldwide after two fatal crashes. "While we expect the MAX groundings will put pressure on fourth-quarter 2019 unit costs, we remain diligent in our cost control efforts and currently expect fourth-quarter 2019 year-over-year unit cost growth to ease from third quarter 2019's year-over-year unit cost growth, excluding fuel and oil expense
and profit-sharing expense, of 7.6%" said CEO Gary Kelly in a statement.

Southwest airlines plane on a runway

We usually suggest that long term and fundamental investors get in at least 10% below our target (full value) price which in this case is $70.80. Therefore we believe a good entry point into Southwest Airlines stock is at $63.70 or below. We expect the stock price of Southwest Airlines to increase to levels to closer to our target price in coming weeks and months.

It is expected that Southwest Airlines 4th quarter and full year results of their 2019 fiscal year will be released in late January 2020.