The Company is continuing its investments in its plant manufacturing operations to meet new consumer and customer demands, achieve quality improvements, and increase operational efficiencies. Plant efficiencies driven by capital investments and ongoing cost containment programs contributed to the improved results discussed above. The prior year 2018 results were adversely affected by the implementation and start-up of new manufacturing packaging lines and resulting operational inefficiencies as well as unfavorable experience from Company self-insurance programs.

The Company’s effective income tax rate was 25.8% and 23.7% in second quarter 2019 and 2018, respectively, and 25.2% and 22.9% in first half 2019 and 2018, respectively. These higher tax rates in 2019 principally reflect higher state and foreign income tax expense, including the effects of certain international tax provisions relating to U.S. tax reform legislation that became effective at the beginning of 2018. Earnings per share benefited from stock purchases in the open market resulting in fewer shares outstanding in both second quarter and first half 2019.” 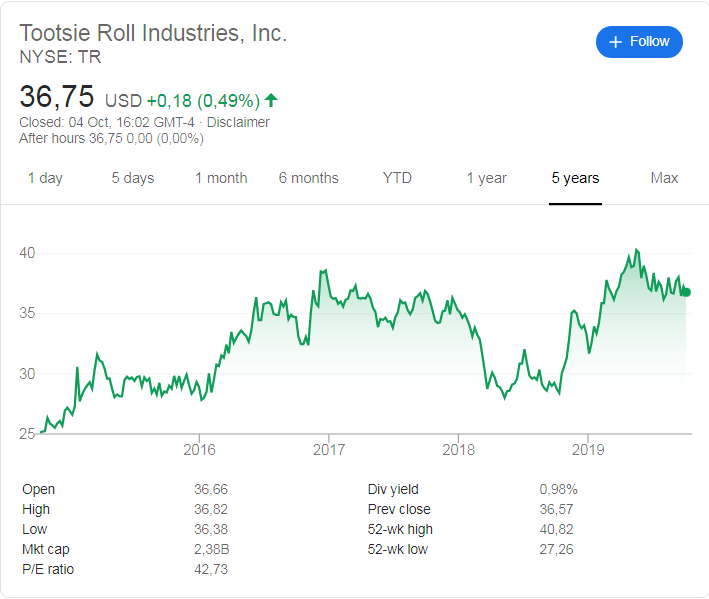 We usually suggest long term fundamental or value investors look to enter into a stock at least 10% below our target (full value) price which in this case is $25.10. Thus we see a good entry point into Tootsie Roll Industries stock at $23.20 or below. Unless the group's next earnings report surprises significantly to the upside we cannot see Tootsie Roll Industries continuing to trade at its current lofty valuations. We therefore expect the stock of Tootsie Roll Industries to pull back sharply in coming weeks and month to more realistic levels, unless their 3rd quarter earnings (which is expected to be released on 10 October 2019) surprises significantly to the upside.