​Data below is reported for the latest quarter unless stated otherwise Net earnings: $1.024 billion  (up from $833 million for the same quarter of the previous year)

United Airlines's management commentary on the results and fiscal guidance

"Thanks to the outstanding efforts of our employees, United extended our streak of expanding pre-tax margin on a quarterly basis. It provides us further confidence to raise our full year 2019 adjusted diluted EPS guidance, putting us ahead of pace to achieve our goal of $11 to $13 in adjusted diluted EPS by the end of 2020," said Oscar Munoz, CEO of United Airlines. "While headwinds affected the sector as a whole this quarter, United's team once again demonstrated a robust ability to overcome adverse cost pressure, managing to continue growing our network while investing in winning our customers' loyalty through smart enhancements to the United experience."

In 2019, United is focusing more than ever on its commitment to its customers, looking at every aspect of its business to ensure that the carrier keeps customers' best interests at the heart of its service. In addition to today's announcement, this year United: 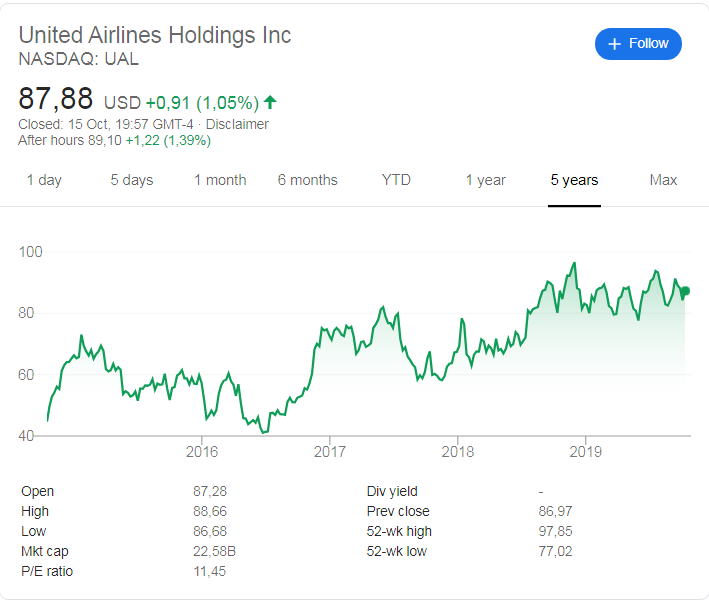 The extract below discusses the latest results from United Airlines as obtained from Thestreet,com

​Shares of United Airlines (UAL - Get Report) are rising after hours Tuesday after the Chicago carrier reported third-quarter earnings ahead of analyst expectations and raised its full-year guidance.  United Air reported GAAP earnings of $3.99 a share against $3.05 in the year-earlier quarter. Shares outstanding fell 6.3% to 256.4 million.