CHICAGO, Jan. 21, 2020 - United Airlines (UAL) today announced it reached its 2020 goal -- first announced in January 2018 -- to achieve adjusted diluted earnings per share (EPS) target of $11 to $13 a full year ahead of schedule. The company also achieved full year pre-tax margin growth of 2.6 points, which is expected to outpace its largest competitors for 2019

2019 highlights for United Airlines:
"2019 was a great year for our United team -- highlighted by achieving our $11 to $13 adjusted EPS target a full year ahead of schedule," said Oscar Munoz, CEO of United Airlines. "With a fourquarter streak of expanding profit margins, when all the results are in we expect our full year 2019 pretax margin growth to be the highest amongst our largest competitors. When I look at United's fundamental strength, I could not be prouder of what we've accomplished in such a short time. This is the New United we set out to build more than four years ago. As we embark on a new year and decade, I believe the outlook for United's future has never been brighter." 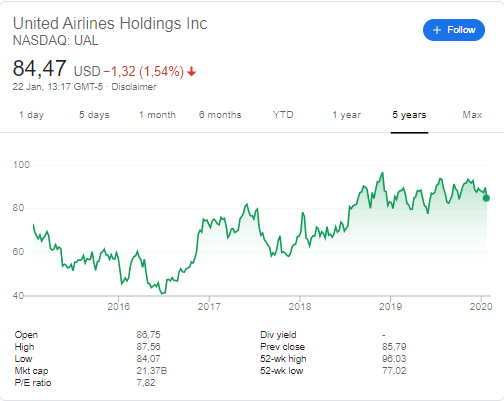 The extract below discusses the latest results from United Airlines as obtained from Thestreet,com

United Airlines Holdings (UAL) - Get Report reported that fourth-quarter net income per share climbed 50% on 3.8% higher revenue. At the parent of United Airlines fourth-quarter earnings reached $2.53 a share from $1.69 in the year-earlier quarter. The latest adjusted earnings were $2.67 a share. Shares outstanding fell 7.1% to 253.4 million.

Fuel costs dropped 5.5% in the quarter. Operating expense overall edged up 1.7%. On Jan. 7 UAL said it expected to report a $90 million fourth-quarter charge associated with its Hong Kong routes. The company said the charge stemmed from its annual review of intangible assets. It reflected lower demand for the Hong Kong market and a resulting revenue decline at the unit