​“We’ve spent the last few years completely transforming The Walt Disney Company to focus the resources and immense creativity across the entire company on delivering an extraordinary direct-to-consumer experience, and we’re excited for the launch of Disney+ on November 12.”
Cable Networks
Cable Networks revenues for the quarter increased 20% to $4.2 billion and operating income decreased $19 million to $1.3 billion. Lower operating income was due to a decrease at ESPN, partially offset by the consolidation of TFCF businesses (primarily the FX and National Geographic networks). The decrease at ESPN was due to increases in programming, production and marketing costs, partially offset by higher affiliate revenue. Higher programming costs were driven by rate increases for NFL, college sports and MLB programming. Affiliate revenue growth was due to an increase in contractual rates and the launch of the ACC Network, partially offset by a decrease in subscribers.

Broadcasting
Broadcasting revenues for the quarter increased 26% to $2.3 billion and operating income decreased $17 million to $377 million. The decrease in operating income was due to lower results at our legacy operations, partially offset by the consolidation of TFCF program sales. The decrease at our legacy operations was due to lower ABC Studios program sales, an increase in programming and production costs at the ABC Television Network, a decrease in advertising revenue and higher marketing costs. These decreases were partially offset by an increase in affiliate revenue due to higher rates. The decrease in ABC Studios program sales was driven by the comparison to prior-year sales of Daredevil and Iron Fist and lower sales of Black-ish. The increase in programming and production costs was driven by higher write-downs and an increase in the average cost of network programming in the current quarter compared to the prior-year quarter. Lower advertising revenue reflected a decrease in rates at the owned television stations.

Equity in the Income of Investees
Equity in the income of investees decreased from $173 million in the prior-year quarter to $150 million in the current quarter due to lower income from A+E Television Networks driven by a decrease in affiliate and advertising revenues and higher marketing costs.

Parks, Experiences and Products Parks,
Experiences and Products revenues for the quarter increased 8% to $6.7 billion, and segment operating income increased 17% to $1.4 billion. Operating income growth for the quarter was due to increases from merchandise licensing, Disneyland Resort and Disney Vacation Club. Higher operating income at our merchandise licensing business was due to an increase in revenue from sales of merchandise based on Frozen and Toy Story, partially offset by lower sales of merchandise based on Mickey and Minnie. Growth at Disneyland Resort was primarily due to higher guest spending, partially offset by expenses associated with Star Wars: Galaxy’s Edge, which opened on May 31, and, to a lesser extent, lower attendance. Guest spending growth was primarily due to increases in average ticket prices and higher food, beverage and merchandise spending.

The increase in operating income at Disney Vacation Club was due to higher sales at Disney’s Riviera Resort in the current quarter, which included a timing benefit from the adoption of new revenue recognition accounting guidance (see page 6), compared to sales of Copper Creek Villas & Cabins in the prior-year quarter. Results at Walt Disney World Resort were comparable to the prior-year quarter, despite the adverse impact of Hurricane Dorian in the current quarter. Increases in guest spending and, to a lesser extent, occupied room nights and attendance were offset by higher costs. Higher costs were driven by costs associated with Star Wars: Galaxy’s Edge, which opened on August 29, and cost inflation. Guest spending growth was primarily due to increased food, beverage and merchandise spending and higher average ticket prices. Operating income at our international parks and resorts was comparable to the prior-year quarter, as growth at Disneyland Paris and Shanghai Disney Resort was largely offset by a decrease at Hong Kong Disneyland Resort. The increase at Disneyland Paris was driven by higher average ticket prices and attendance growth. At Shanghai Disney Resort, higher operating income was due to an increase in average ticket prices, partially offset by lower attendance. Lower results at Hong Kong Disneyland Resort were due to decreases in attendance and occupied room nights reflecting the impact of recent events.

Studio Entertainment
Studio Entertainment revenues for the quarter increased 52% to $3.3 billion and segment operating income increased 79% to $1,079 million. Higher operating income was due to an increase in theatrical distribution results, partially offset by a loss from the consolidation of the TFCF businesses. The increase in theatrical distribution results was due to the performance of The Lion King, Toy Story 4 and Aladdin in the current quarter compared to Incredibles 2 and Ant-Man And The Wasp in the prioryear quarter. Operating results at the TFCF businesses reflected a loss from theatrical distribution driven by the performance of Ad Astra, Art of Racing In The Rain and Dark Phoenix, partially offset by income from TV/SVOD distribution.

Direct-to-Consumer & International
Direct-to-Consumer & International revenues for the quarter increased from $0.8 billion to $3.4 billion and segment operating loss increased from $340 million to $740 million. The increase in operating loss was due to the consolidation of Hulu, costs associated with the upcoming launch of Disney+ and our ongoing investment in ESPN+, which was launched in April 2018. These decreases were partially offset by a benefit from the inclusion of the TFCF businesses driven by income at Star India. 6 Commencing March 20, 2019, as a result of our acquisition of a controlling interest in Hulu, 100% of Hulu’s operating results are included in the Direct-to-Consumer & International segment. Prior to March 20, 2019, the Company’s ownership share of Hulu results was reported as equity in the loss of investees.


The stock of Walt Disney is trading a lot closer to its 52 week high of $147.15 than it is to its 52 week low of $100.35. This to us is a clear indication that the short term momentum and sentiment towards Walt Disney stock is very positive. 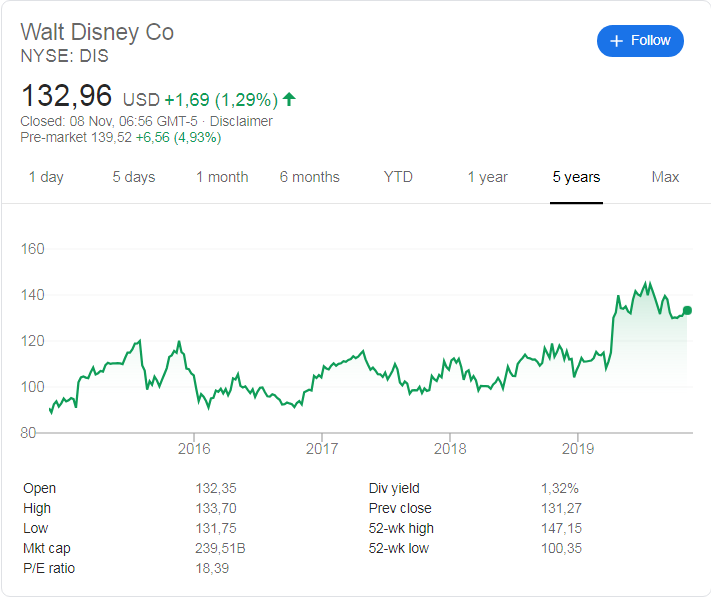 ​Walt Disney Co. (DIS - Get Report) posted stronger-than-expected fourth quarter earnings Thursday as studio revenues surged past estimates, thanks in part to Toy Story 4 and The Lion King, ahead of next week's Disney+ streaming entertainment service launch. Disney said adjusted earnings for the three months ending in September, the company's fiscal fourth quarter, came in at $1.07 per share, down 27.7% from the same period last year but firmly ahead of the Street consensus forecast of 95 cents per share. Group revenues, Disney said, rose 34% to $19.01 billion, just shy of analysts' forecasts of $19.04 billion.

"Our solid results in the fourth quarter reflect the ongoing strength of our brands and businesses," said CEO Bob Iger. "We've spent the last few years completely transforming The Walt Disney Company to focus the resources and immense creativity across the entire company on delivering an extraordinary direct-to-consumer experience, and we're excited for the launch of Disney+ on November 12." Disney shares were marked 5.9% higher in extended hours trading Thursday immediately following the earnings release at $140.76 each, a move that would extend the stock's year-to-date gain to around 28.4% if it holds into Friday's opening bell. 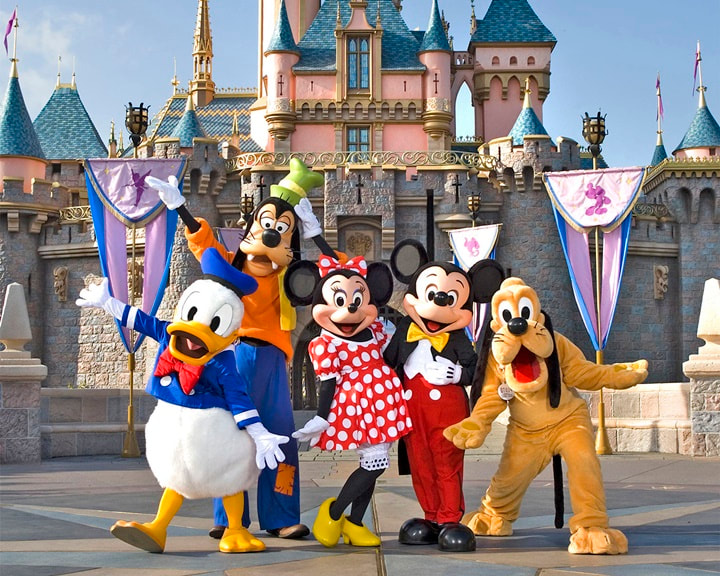 We therefore believe that  the stock of Walt Disney's is close to being fully valued. We usually recommend long term fundamental or value investors look to enter a stock at least 10% below our target price, which in this case is $137.10. A good entry price into Walt Disney would therefore be at $123.40 or below.