​“We had a strong first quarter, highlighted by the launch of Disney+, which has exceeded even our greatest expectations,” said Robert A. Iger, Chairman and Chief Executive Officer, The Walt Disney Company. “Thanks to our incredible collection of brands, outstanding content from our creative engines and state-of-the-art technology, we believe our direct-to-consumer services, including Disney+, ESPN+ and Hulu, position us well for continued growth in today’s dynamic media environment.”
​Cable Networks
Cable Networks revenues for the quarter increased 20% to $4.8 billion and operating income increased 16% to $862 million. Higher operating income was due to the consolidation of TFCF businesses (primarily the FX and National Geographic networks), partially offset by a decrease at ESPN. The decrease at ESPN was due to an increase in programming and production costs and lower advertising revenue, partially offset by higher affiliate revenue. Higher programming and production costs were driven by rate increases for NFL, College Football Playoffs and other college sports programming as well as costs for the ACC Network, which launched in August 2019. The decrease in advertising revenue was due to lower average viewership. Affiliate revenue growth was due to an increase in contractual rates, partially offset by a decrease in subscribers. The decrease in subscribers was net of the impact of the ACC Network.

Broadcasting
Broadcasting revenues for the quarter increased 34% to $2.6 billion and operating income increased 41% to $575 million. The increase in operating income was due to the consolidation of TFCF, largely reflecting program sales, and a timing benefit from new accounting guidance, partially offset by lower results at our legacy operations. At the beginning of fiscal 2020, the Company adopted new accounting guidance, which removes certain limitations on the capitalization of episodic television production costs. Compared to the previous accounting, programming and production expense will generally be lower in the first half of the fiscal year and higher in the second half of the fiscal year as the capitalized costs are amortized. The decrease at our legacy operations was due to lower advertising revenue, a decrease in ABC Studios program sales and higher network programming and production costs, partially offset by an increase in affiliate revenue due to higher rates. Lower advertising revenue reflected decreases at the owned television stations and in average network viewership, partially offset by higher network rates. The decrease in ABC Studios program sales was driven by the comparison to the prior-year sale of The Punisher. Higher network programming and production costs were driven by a higher cost mix of programming in the current quarter compared to the prior-year quarter.

Parks, Experiences and Products Parks
Parks, Experiences and Products revenues for the quarter increased 8% to $7.4 billion, and segment operating income increased 9% to $2.3 billion. Operating income growth for the quarter was due to increases at merchandise licensing and domestic parks and resorts, partially offset by lower results at our international parks and resorts. Higher merchandise licensing results were due to an increase in revenue from sales of merchandise based on Frozen, Star Wars and Toy Story, partially offset by lower sales of merchandise based on Mickey and Minnie. Growth at our domestic parks and resorts was due to higher guest spending and, to a lesser extent, increased attendance, partially offset by higher costs. Guest spending growth was primarily due to higher average ticket prices and an increase in food, beverage and merchandise spending. Higher costs were due to new guest offerings, driven by Star Wars: Galaxy’s Edge, and the impact of wage increases for union employees. The decrease in operating income at our international parks and resorts was due to lower results at Hong Kong Disneyland Resort, partially offset by growth at Shanghai Disney Resort. Lower results at Hong Kong Disneyland Resort were due to decreases in attendance and occupied room nights reflecting the impact of recent events. At Shanghai Disney Resort, higher operating income was driven by an increase in attendance.

Studio Entertainment
Studio Entertainment revenues for the quarter increased from $1.8 billion to $3.8 billion and segment operating income increased from $309 million to $948 million. Higher operating income was due to increases in theatrical and TV/SVOD distribution results at our legacy operations, partially offset by a loss from the consolidation of the TFCF businesses. The increase in theatrical distribution results was due to the performance of Frozen II and Star Wars: The Rise Of Skywalker in the current quarter compared to Ralph Breaks the Internet in the prioryear quarter. The prior-year quarter also included Mary Poppins Returns and The Nutcracker and the Four Realms and the current quarter included Maleficent: Mistress of Evil. Growth in TV/SVOD distribution results was due to sales of content to Disney+, partially offset by a decrease in pay television sales to third parties. Operating results at the TFCF businesses reflected income from TV/SVOD distribution, which was more than offset by a loss from theatrical distribution and general and administrative costs. TFCF theatrical releases in the current quarter included Spies in Disguise, Ford v. Ferrari and Terminator: Dark Fate.

Direct-to-Consumer & International
Direct-to-Consumer & International revenues for the quarter increased from $0.9 billion to $4.0 billion and segment operating loss increased from $136 million to $693 million. The increase in operating loss was due to costs associated with the launch of Disney+, the consolidation of Hulu and a higher loss at ESPN+. These increases were partially offset by a benefit from the inclusion of the TFCF businesses due to income at the international channels including Star.  The increase in operating loss at ESPN+ was primarily due to higher programming costs, primarily for Ultimate Fighting Championship (UFC) rights, and an increase in marketing spend, partially offset by subscriber revenue growth and UFC pay-per-view fees. Commencing March 20, 2019, as a result of our acquisition of a controlling interest in Hulu, 100% of Hulu’s revenues and expenses are included in the Direct-to-Consumer & International segment. Prior to March 20, 2019, only the Company’s ownership share of Hulu results was included (as equity in the loss of investees).

The stock of Walt Disney is trading a lot closer to its 52 week high of $153.41 than it is to its 52 week low of $107.32. This to us is a clear indication that the short term momentum and sentiment towards Walt Disney stock is very positive. 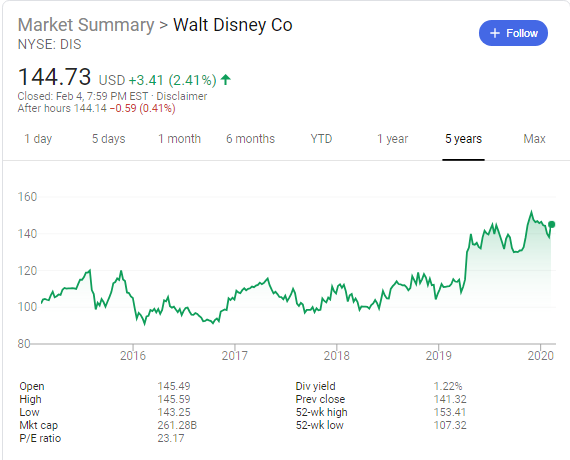 ​Disney's direct-to-consumer service launched in November, and has racked up 28.6 million paid subscribers so far, the company said on Tuesday. Disney expects its next wave of subscribers to come from Western Europe and India, where Disney+ is set to debut in March. Disney (DIS) - Get Report shares were roughly flat in after-hours trading.Disney+ ended the quarter with 26.5 million subscribers, beating analysts' estimates of 20 to 25 million, and accumulated an additional 2 million this year thanks to new sign-ups directly on Disney and through various distributors. Disney CEO Bob Iger said he was "comfortable" that Disney+ struck the right balance of library and original content.

"Clearly, the original shows that we decided to invest in, led by the Mandalorian, have worked. And we knew when launched that we were launching with a modest amount of original programming and that it would build over time...[we] don't really feel that there's much that we have to adjust to right now," Iger said. 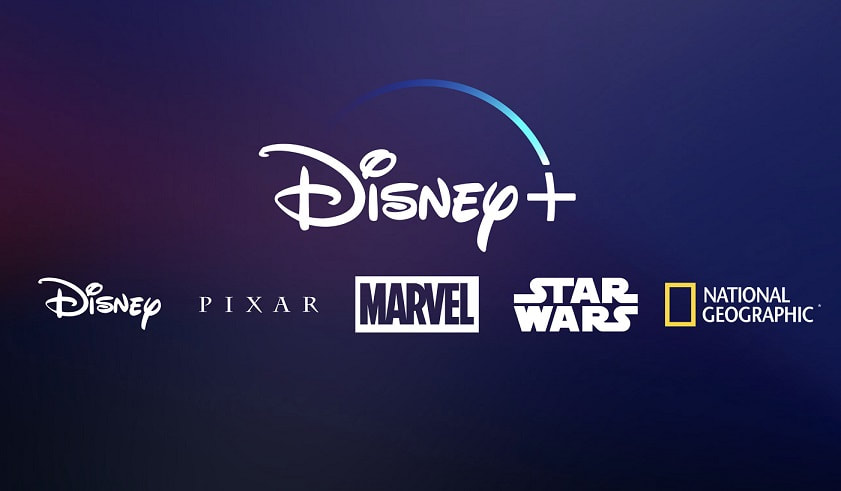 We therefore believe that  the stock of Walt Disney's is close to being fully valued. We usually recommend long term fundamental or value investors look to enter a stock at least 10% below our target price, which in this case is $140.30. A good entry price into Walt Disney would therefore be at $126.30 or below.