Weibo is a leading social media for people to create, share and discover content online. It combines the means of public self-expression in real time with a powerful platform for social interaction, content aggregation and content distribution. Any user can create and post a feed and attach multi-media and long-form content. User relationships on Weibo may be asymmetric; any user can follow any other user and add comments to a feed while reposting. This simple, asymmetric and distributed nature of Weibo allows an original feed to become a live viral conversation stream.
​
Weibo enables its advertising and marketing customers to promote their brands, products and services to users. Weibo offers a wide range of advertising and marketing solutions to companies of all sizes. The Company generates a substantial majority of its revenues from the sale of advertising and marketing services, including the sale of social display advertisement and promoted marketing offerings. Weibo has developed and is continuously refining its social interest graph recommendation engine, which enables its customers to perform people marketing and target audiences based on user demographics, social relationships, interests and behaviors, to achieve greater relevance, engagement and marketing effectiveness. 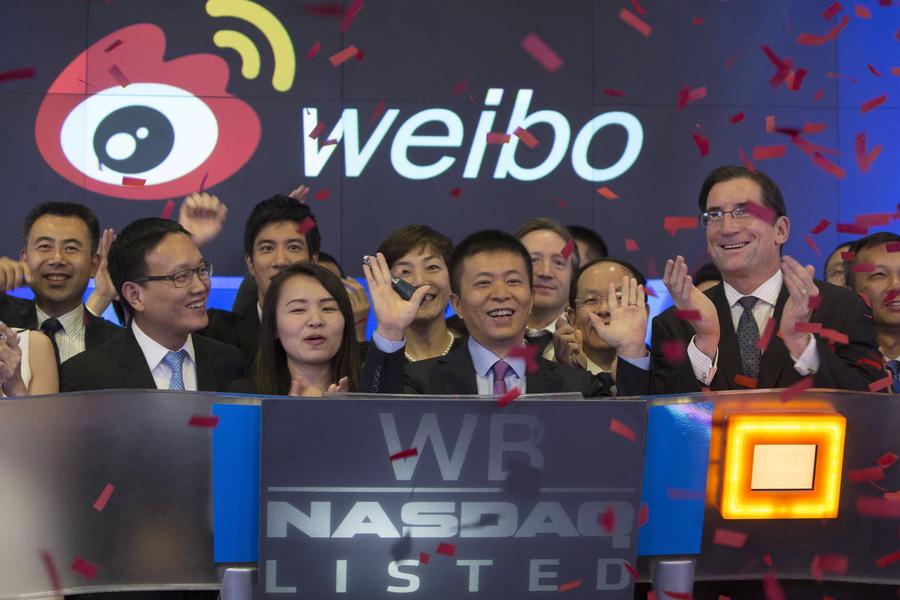 "We are pleased with the sustained momentum in our user and engagement growth," said Gaofei Wang, CEO of Weibo. "Leveraging stronger network effect, ongoing product innovation and robust content ecosystem, Weibo continued to reinforce its leadership as a social media platform and further explore opportunities to deliver value to our community. On monetization, despite market competition and macro headwinds, we continued to tap into customers' social ad wallet with differentiated ad products and KOL's rising influence."

Business Outlook
For the fourth quarter of 2019, Weibo estimates its net revenues to increase 0% year-over-year to 3% year over year on a constant currency basis. This forecast reflects Weibo's current and preliminary view, which is subject to change.

The image below, obtained from Google, shows the stock price history of Weibo (NASDAQ: WB) for the last 5 years. And its been a very good time for Weibo stockholders. 5 years ago the stock was trading around $14,40 and today its trading at $43,55. That's a more than decent return of 202% provided to Weibo stockholders over the last 5 years. The stock of Weibo is currently trading at a lot closer to its 52 week low of $34.36 than it is to its 52 week high of $74.68 which to us is a clear indication that the short term sentiment and momentum of Weibo stock is negative. 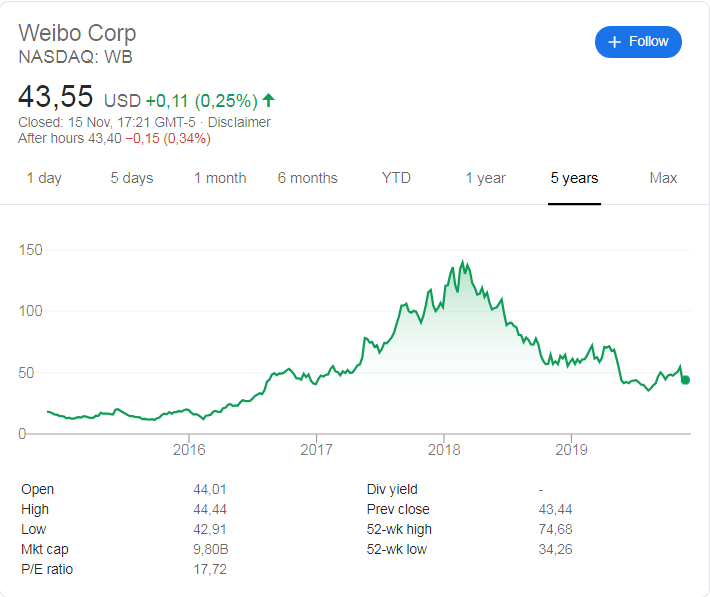 ​The extract below shows recent coverage of Weibo as obtained from TheStreet.com
​
​Most industries would kill for growth in the mid-double-digits. So, it's a sign of just how fast China's Internet sector is growing that 15% growth in advertising revenue is now considered disappointing. Total ad sales for China's "Big Four" Internet companies - Alibaba Group Holding (BABA) , Baidu (BIDU) , Tencent (TCEHY) and Weibo (WB)  -- increased 15% for the second quarter of this year, compared with the same time last year. But it has steadily declined by almost half in recent quarters, from 27% in the third quarter 2018. The pace also looks set to slow further.

It's still "robust" growth, S&P Global Ratings notes in a report on the topic. But companies with ad-revenue streams that are not related to e-commerce may suffer, as new players crowd into the space. Chief among those is the privately held Beijing ByteDance Technology. The company has seen rapid growth in users for TikTok, its hyperpopular short-form video service. That is known as Douyin in China, were ByteDance is successfully making money off that traffic. It also has a popular news-headlines app, Jinri Toutiao, or "today's headlines." ByteDance also in 2017 bought Musical.ly, the U.S. short-video app, for almost $1 billion (USD). 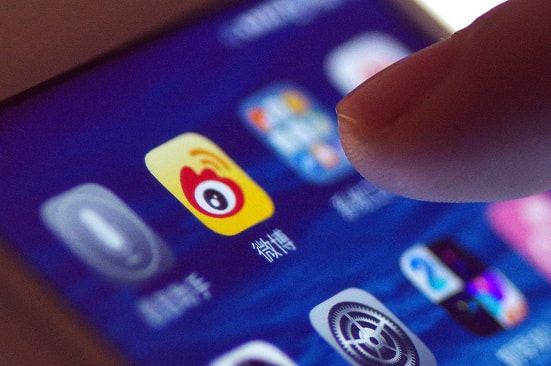 So based on the 3rd quarter 2019 earnings report of Weibo (NASDAQ: WB) what do we value Weibo stock at? Based on the earnings reported and the fiscal guidance provided our valuation model provides a target (full value) price for Weibo at $41.40 a stock.

We therefore feel that the stock is slightly overvalued and a good price long term fundamental or value investors should look to enter the stock at is at least 10% below our target (full value) price which in this case is $41.40 We therefore believe a good entry point into Weibo stock would be around $37.30 or below.  We expect the stock of Weibo to pull back slightly from current levels to levels closer to our target (full value) price in coming weeks and months.

Next earnings release of Weibo